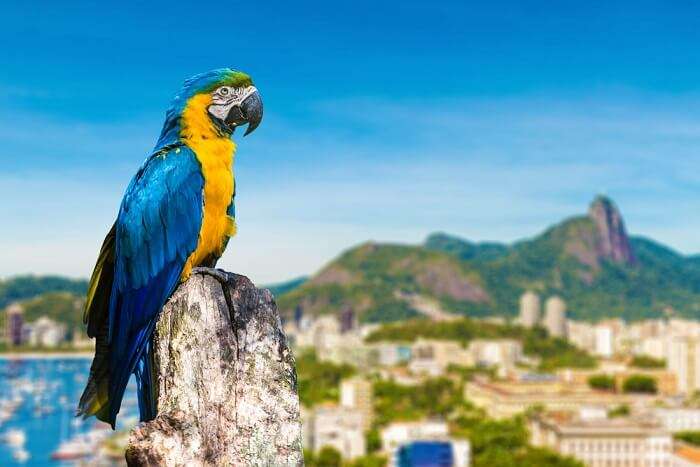 If you are looking for a place in South America for an adventurous vacation then Brazil is the perfect place for you. This country is the largest one in South America and takes up about half of the continent. The southern hemisphere is covered with Brazil and you can see the tropical regions that are filled with exotic plants and animals. They also have many minerals hidden beneath this wonderful surface. You can also see that there is a part in Brazil that showcases the past and has colonial architecture displayed through the streets.
So, are you ready to explore the Brazil Wildlife yet?

This tropical paradise is loved by tourists and is filled with many unique cultural attractions and destinations which include many beaches and some rainforests filled with exotic wildlife. This country is gifted with a vast coastline that runs about 7400 kilometers and is covered with shimmering gold sand. 60% of the Amazon forest is present here and that includes almost one tenth of the species residing in this forest. This country is known as the only place on this whole planet with such biodiversity. There is so much that you can learn about the plants, animals and fungi of South America in this country.

You can find every type of plant and mammal that is present in South America in this country and also take a look at the reptiles and the vast marine life.

This small wild cat is one of the most unique animals in the Amazon basin. This cat is also called as eyra. There are many other names also given to them in different languages like Spanish and Portuguese. They are new and rare species of cat that are reserved in this country. They can be medium or small sized. They usually are found around lowland brush areas which are near a water source like dry thorn forest or wet grassland. They first were spotted in Texas and Mexico but you can also find them in Florida.

Must Read: Restaurants In Brazil: These 10 Brazilian Eateries That Lend Fine Dining A New Meaning

They belong to a group of predators and are the ones that have lived here for the longest time. They are found in social groups that are made with their family or friends and are usually in a number of three to eight members. You can also call them giant river otters and they fall into the category of carnivorous animals. They are dominant but are really cooperative. You can observe that they mark their territory and are aggressive among themselves. They are listed as the endangered species and many reserves are made so that we can protect them.

This spider belongs to the Theraphosidae tarantula family. They are known as the largest spiders and can be pretty scary. They are known for their large size and mass. You can locate these spiders around rainforests only and they are also called as goliath bird eating spider. They prey on birds and live near swampy or marshy areas. They are nocturnal and live in deep burrows. Many locals in South America add this giant spider in their meal with banana leaves and describe its taste like shrimp.

These monkeys are very popular as they are used in many TV shows and movies. They belong to the subfamily called Cebinae and are popularly known as the organ grinder monkey. They can be seen in central and south America. They are fond of wet lowland forests and dry forests. They come in different colors like brown, black or whitish. They also have really long tails which is similar to the length of their body.

You can find this deer in the low elevated areas of south America. They love being around grasslands as they can cover them up even when they are standing. Such species are a really important for a good animal cycle or ecosystem. The endangerment of these species is not good for the environment. Many of them can be spotted in Pantanal wetlands. In Brazil there are only about 80000 pampas deer and if they decrease even more than it can have some adverse effects on the environment. These species are found in many areas and they feed regularly by the day and follow through many nocturnal activities.

Suggested Read: 10 Brazil National Parks That Will Let You Explore The Realms Of Wildlife At Its Best

This animal is in a shape of a pig and has a small nose trunk attached to its face. This is a large herbivorous animal and is found in south and Central America. This mammal has a long history of evolution and you can see the resemblance between animals that are known to be its ancestors. The most common thing about the tapirs is that they have oval shaped ears that are white tipped. They also have small stubby tails.

This aquatic animal is a very valued and known fish species. They can be seen in large water bodies and with a large group. They aren’t all similar as some can have different body shapes and colors which add to the uniqueness of this species. The cichlids are from the family which has the largest vertebrate in the world. They are found in places that have shallow depths but there are some exceptions even in this case. As they are herbivorous they usually feed on algae, plants and small animals.

Suggested Read: 10 Brazilian Rivers Which Every Traveler Should Explore While At This Roaring Cascade!

This specie is from a really large family and that family includes about 36 species. In this adversely diverse forest this bird is a different and beautiful one. There are so many bird species around this forest but the trogons will catch you eye as they have stunning colors and amazing patterns that make them even more attractive. They feed on some fruits and insects which has an effect on their health as they might have weak legs.

They have about two thousand species in the family that this fish comes from. Most of the fishes that belong to this group are carnivorous and they have really sharp teeth. Their body is really well defined with intricate and small scales. You can find them in most of the rivers and lakes in south and Central America.

Further Read: 8 Best Homestays In Brazil That Are All About Terrific Location, Comfort, And Hospitality

These are some of the creatures in Brazil that makes their wildlife even more spectacular and diverse. There are so many animals that reside in this amazing rainforest and if you love animals and birds then this is the best place to visit. So are you ready to dive in this fauna paradise yet? Book your trip to Brazil with TravelTriangle to have an adventure like never before!

Q. Which is the best time to see the Brazil wildlife attractions?

A. April to October is the best time to visit Brazil by all ages of people to see its wildlife attractions. These are pleasant months and you can see the Brazil wildlife in its natural state.

Q. How many National Parks are there in Brazil?

A. There are 71-National Parks as of 2019 in Brazil. They are the best place to explore by adventure seekers, wildlife enthusiasts, bird lovers, and nature trail takers. Out of 71 Natural reserve areas, only a few are open to the public and tourists.

Q. Is Brazil a safe place to land by a solo woman tourist?

A. Yes, they must come under an organized Brazil wildlife holiday package. This will be inclusive of an English-speaking guide too.

Q. What are the important things to carry to see the wildlife attractions in Brazil?

A. You must carry binoculars, cameras, insect repellants, a compass, comfortable hiking shoes, sunscreen lotions, and the travel guide or the map of the National Park you are going to visit in Brazil.

Q. What kind of clothing is the best to go for a wild safari in Brazil?

A. It is advisable to carry some comfortable fabrics made of pure cotton or jeans materials. Brazil’s weather is not too hot or too cold. A t-shirt and jerkin are also the best to wear for jungle safari.

Q. Are there any threats from the tribal people living in Amazonia National Park?

A. Many tribal people are living in the Amazonia forest reserve. It is advisable to come here under a guided wild tour. They are animal and bird hunters. As of now, they have not disturbed any tourists.

Q. Is Brazil a safe place to take a wild tour?

A. Yes, Brazil is an all-season international destination in South America. It is a tourist-friendly nation too. The wildlife enthusiast can take a tour in any season to explore its rainforest and National Parks.

15 Best Things To Do In Gwalior: The Glittering Gem Of Madhya Pradesh

9 Best Casinos In San Francisco Which One Must Definitely Visit And Play A Game Of Poker!