Bridge Of Sighs: Take A Romantic Gondola Ride To This Enchanting Place In Venice 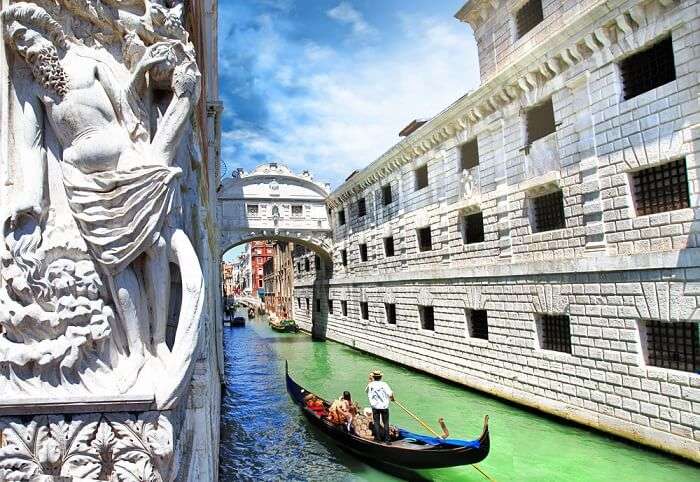 Venice has various canals, and consequently, it isn’t extraordinary that there are innumerable of unique bridges. The Bridge of Sighs, though, is apparently-together with the Rialto- the well-renowned bridge in the city, and conceivably even the most wonderful as well. If you are planning to visit Venice or have already reached here, must make it sure to once have a look at the beauty of bridge of sighs, this is not just a bridge it is fantastically designed to give its viewers an eye warming experience. We have discussed below the complete details about its history, places from where to view it to have the most decent look and bridge of sighs entrance fee and much more that will guide you once you reach there. 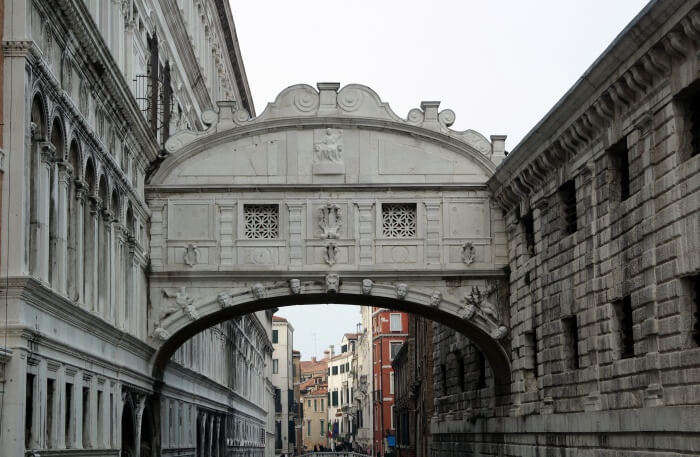 La Ponte dei Sospiri, as it’s so elegantly described in Italian, was crafted in 1600 by Antonio Contin (he also designed one of Venice’s another top sight – the Rialto Bridge). This unique Bridge of Sighs Venice is a small distance from the St. Mark’s Square and joins the Prigione Nuovo (new prison) with the Doge Palace. This former jail is in actual the earliest construction in the globe that was individually created to attend as a prison. The Bridge of Sighs used as a medium of transfer for prisoners to the offices of inquisitor where they kept on trial.
It was granted this title because, as per the tradition, the defendants sighed when they were watching the external world for the last time by a small windowpane on the bridge. Whether this is accurate, isn’t recognized for certain, though as it states in Italian, “Se non è vero, è ben trovato”.

Suggested Read: Venice Carnival 2022: The Only Guide You Need For The Extravaganza!

Some Facts About The Bridge of Sighs 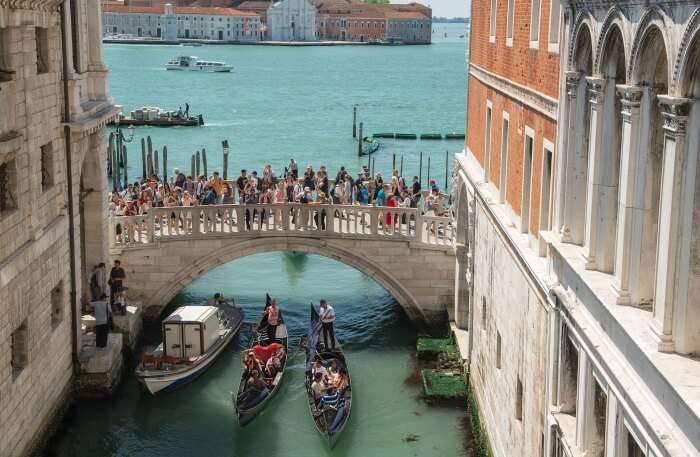 Image Source
Here are some interesting facts to enlighten you about this marvelous bridge in the northern part of Italy. You may show off this trivia knowledge on your tour to other visitors and thank us later:

Suggested Read: This May Day, Venice Plans To Segregate Its Locals & Tourists For Ensuring Sustainable Tourism

Places To Visit Near Bridge of Sighs Venice

Lets’ have a look at a few of the unmatched destinations that are overloaded with excellence and surprises near the Bridge of Sighs for the tourists arriving Venice from all around the world. 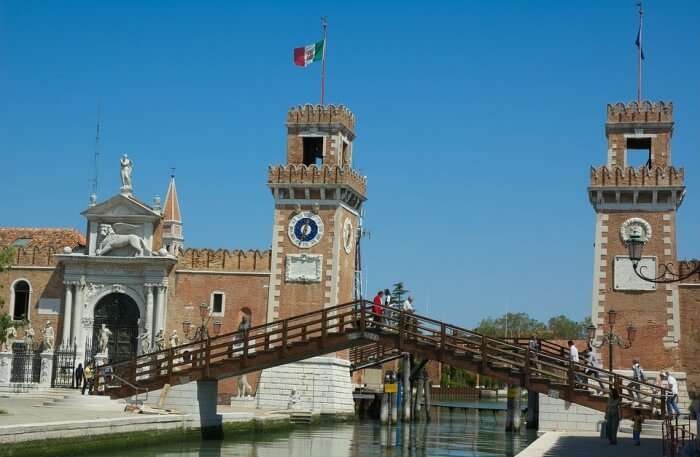 Image Source
With all of these canals and islands, it’s no wonder that the naval power of Venice makes it feel proud. You can tour its ancient shipyard in the Castello region. The Arsenale addressed origin to the Venetian Republic galleys during its heyday at the time of Renaissance. The spot possesses showcases throughout the Biennale, but it’s yet meriting a tour during the entire year. Rehabilitation work is undertaken in several of the workshops and buildings of the massive walled stretch. The Naval History Museum is a must-visit for warships enthusiasts, though it also contains maps, gondolas, and weapons. They even possess a Bucintoro, a model of the Doge’s ceremonial barge.

Image Source
The basilica marks the place of the Pentecost potpourri that looks in the original ARKANE book, Stone of Fire. View up, and you will notice the fire tongues getting down over the missionaries. The basilica also possesses the repository where you will get acquisition of reliquaries. They comprise the many saints’ bones. We’ve previously observed at quaint spiritual artifacts, but these repositories for holy relics are somewhat different. The treasury themselves are gorgeous, made of crystal and gold. It requires spending a little more to view, but it’s among the strangest places to visit near Bridge of Sighs Venice.

Suggested Read: 10 Day Trips From Venice That Will Satiate Your Extra Wanderlust In 2022! 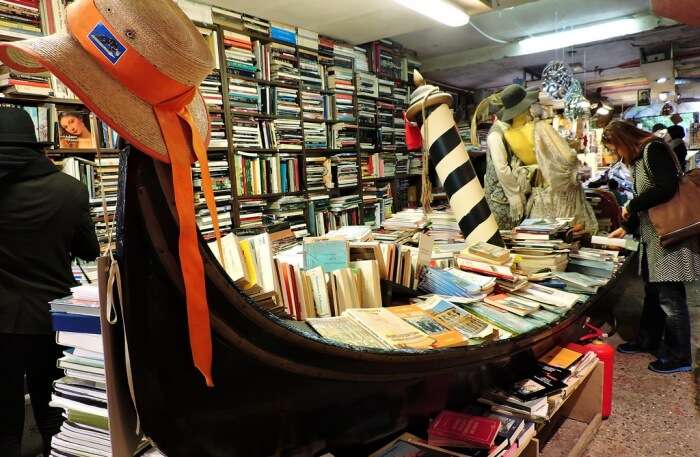 Image Source
If you are something like me, you can’t oppose a trip to a book store. But how would you manage as a bookshop keeper in a town placed on the water that usually floods? This remarkable Venetian shop ran on an elegant if unique solution. They store books, magazines, maps in waterproof bins or bathtubs. One room even flaunts a gondola as a stopgap shelf. In English, its name suggests ‘Library of High Water’. So each time the district canals flood, the amount of water rise above the normal waterline. Its flues have even been recognized to possess the occasional flue kit, strong enough to avoid the situation of flooding. 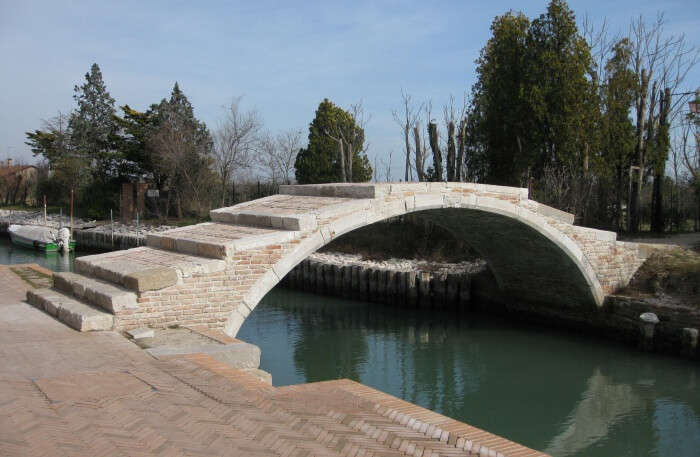 Image Source
While we are on the matter of islands, you can discover more concerning the history of Venice on Torcello. The town was initially founded here in the seventh century, and some believe the Romans occupied it. In the twelfth century, a malaria outburst on Torcello viewed the nearby Rialto reimbursement eclipse the island as the core of the city of Venice. Its church harkens after to the Byzantine custom of the era while cathedrals on the island illustrate its myth.

You can approach it by using a boat to Burano, shifting to another ship once you reach there. The church and museum lie just at a walking distance of 10 minutes from the ship station. So you will have lots of time to appreciate its collapsing grace. It’s not broken, but it’s unquestionably off the battered course.

Suggested Read: 26 Best Places To Visit In Venice In 2022 – The Most Beautiful Canal City Of The World 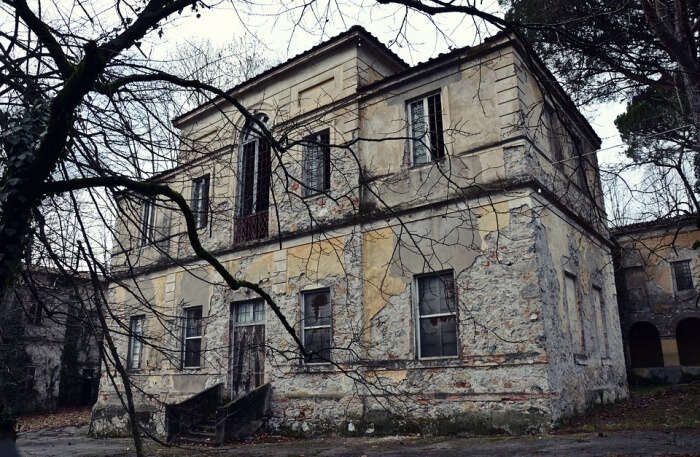 Image Source
A chain of little islands makes up the magnificent city of Venice. But a group of different islands in the lagoon persists evidence to both its craft heritage and its darker past. While Burano and Murano might pull the visitors enthusiastic to know about lace or glass making, the other islands provide far more surprising places to visit near Bridge of Sighs Venice. San Servolo is recognized as the “Island of the Mad”. Starting in the year 1725, it served as the official mental asylum of the city for about 250 years.

While serving as a hospital during its time of service, it admitted more than 200000 victims. It ended in the year 1978, but the government of Venice decided it needed to protect the history and the records of the hospital. They founded the Study of Social and Cultural Marginalization Institute and opened it again in its modern form in the year 2006.

Visiting The Bridge Of Sighs 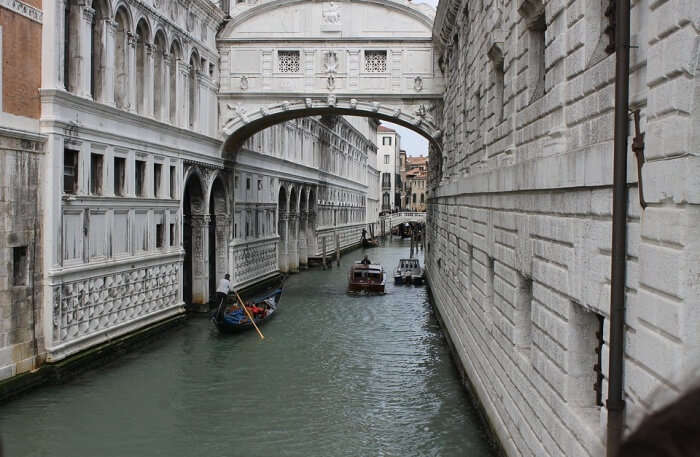 Image Source
There are four different ways in which you can see the Bridge of Sighin Venice, Italy:
If you are in a hurry, it’s finest to appreciate it from a distance. You only have 2-spots to see this extravagant bridge. The first is bustling and that is from the Bridge of Paglia (Ponte della Paglia). You arrive at this spot by moving to the right beside the Doge’s Palace. You cannot avoid this bridge as it is the primary bridge you confront.

The next (and prominent) site from where you can view it is likewise from another bridge: the Ponte della Canonica.
You can also stroll on the Bridge of Sighs when you tour the Doge’s Palace. You will not just trip the legendary palace, but further the jails, as well as the traditional bridge. You will then realize that it is separated into 2 narrow sections split by a wall in between. This was because the defendants arriving from both directions could nevermore observe each other.

Ultimately, you can experience a romantic Bridge of Sighs gondola ride through boat below the Bridge of Sighs Venice. Remark that this can be costly. Here is a summary of the ways by which you can view the beauty of the bridge. 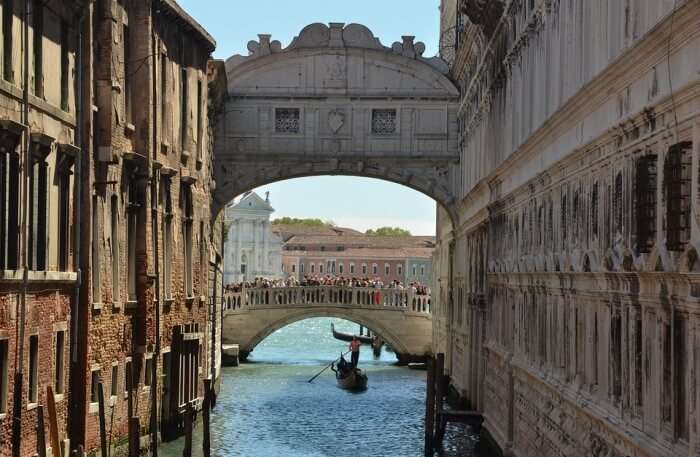 Image Source
For touring through a boat ride, you have to pay and Bridge of Sighs entrance fee for a gondola varies as per the choice of time you prefer to have it: 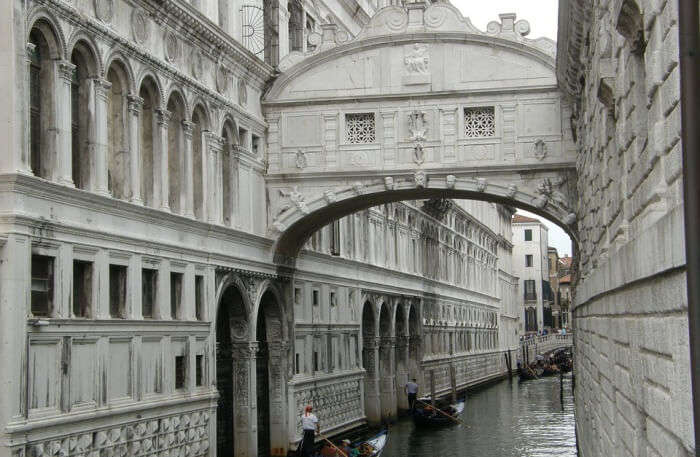 Image Source
In case you were wondering what makes this piece of architecture a world-famous attraction, below is your answer. Read on to know more:

Italian Ponte Dei Sospiri (Bridge of Sighs) is located in Venice, Italy, crossing the narrow canal – Rio di Palazzo connecting the prisons and the Doge’s Palace. It is assumed to be built around 1600 by the Antonio Contino – a great architect. The surrounded path was so named of the “sighs” of the prisoners who moved through the bridge of sighs Venice. We have discussed all the interesting facts about the bridge and also the complete history and the mysteries that are residing in its past. The Bridge of sighs is a must visit place while having a trip to Venice. It is so magnificently built that once you have a look at it, you can’t even believe that it is human-made. Plan a trip to Italy and experience the beauty of this marvel architecture for yourself.