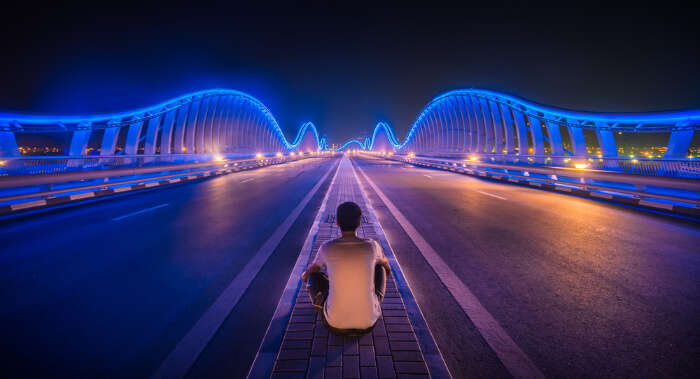 Dubai is one of the most frequently visited destinations in the world since forever. Every year it comes up with something that leaves the world rolling! It is known for its superstructures that define grandeur and are way beyond human’s imagination. What you might not have thought about in your dreams is already there in Dubai. Not only does it offer skyscrapers that make the human race proud but also sources of entertainment that will make you go crazy. Apart from that, it has a great connectivity, thanks to bridges in Dubai which are not normal constructions but symbols of man’s creativity and innovation. So, if you are visiting Dubai anytime soon, do take a look at how these bridges stand proudly and add on to the beauty and modernity of the city like none other!

Here is a list of bridges in Dubai that are enough to measure the competence of the country when it comes to creating something out of the ordinary. Take a look!

Burj Khalifa is just one name out of hundreds when it comes to superstructures that reside in Dubai. Another name is this Floating bridge. The Floating bridge, Dubai, is one of the most famous bridges in Dubai. The bridge was created in just 23 days and has a record of getting built in such less days. It is a first-of-its-kind bridge and has six lanes. The construction of the bridge was visioned by Sheikh Mohammed Bin Rashid Al Maktoum and the contract was given to Waagner Biro. Also, it is one of the pontoon bridges.

Must Read: Dubai In October Is All About Traversing New Places & Indulging In Activities!

This is one of the old bridges of Dubai and is also different from other bridges. It has the opening mechanism, the one that you see in movies, and allows large ships to pass by as it is built over water. This is the first ever bridge created on the Dubai creek. Earlier people used to cross Dubai creek through a ferry. But after the construction and opening of this bridge, they could do so easily through this bridge.

Suggested Read: 22 Free Things To Do In Dubai And Experience Over The Top Luxury Without Spending A Penny

This is another name in the list of famous bridges in Dubai. A road bridge built over the popular Dubai creek, Al Garhoud played a great role in traffic control. The bridge was built back in 1976. There are n number of roads connected to this bridge. The bridge comprises of 14 lanes in total. Apart from that, the recent version of this bridge showcases works of art which makes it a unique bridge for the people passing by!

Suggested Read: The Complete Guide To Applying For Dubai Visa For Indian Tourists

Business Bay Crossing bridge connects Deira in Dubai to Bur Dubai. The bridge has 13 lanes and was opened in 2007. The bridge has a height of 15m and offers a corridor for the bikers to travel safely. The bridge has been very helpful till date specially for the motorists traveling from Bur Dubai to Deira. The total road network is as long as 15km. This is the third bridge on Dubai creek and is situated south to the Al Garhoud bridge.

Suggested Read: 53 Tourist Places In Dubai: Do Not Come Back Without Visiting These Marvels In 2021

This glass bridge in Dubai is the new centre of attraction in the city of marvels! It is the first ever sky bridge built in Dubai as well as UAE. It is a 150m high glass floor that offers 360 degree views of the city. The floor is located 48 floors above the ground and is quite breathtaking. The bridge is covered with glass panels. An interesting fact about the bridge is that as you will start walking on it, its translucent floor will turn transparent. You will be able to see Zabeel park below the bridge with the help of those glass floors. There are also telescopic cameras on the bridge that will allow you to have a closer view of the landmarks of Dubai. The bridge offers sheer fun.

There is nothing ordinary in Dubai, not even the bridges in Dubai. All the bridges have been constructed with a unique technology as well as ideology. Various new technologies were specially created for their construction. For the people of Dubai, these were not just bridges but a vision and a way to change the face of the city. They are also active in controlling traffic and helping people travel from place to place without any hassle. They also add on to the modernity of the city. So, if you are fascinated enough and want to be on these bridges then don’t think too much, plan a trip to Dubai and have a heartwarming vacation.

How many bridges are in Dubai?

Is Maktoum Bridge free on Fridays?

How much is the toll in Dubai?

The maximum toll that you would have to pay at any of the bridges in Dubai is Rs. 78(AED 4).

How does the floating bridge work?

Floating bridges are made up of giant concrete pontoons which are water-tight and are connected to each other rigidly. The roadways are built on these structures. Despite their heavy concrete composition, the weight of the water displaced by the pontoons is equal to the weight of the structure (including all traffic), which allows the bridge to float.

What is special about Skybridge Dubai?

The Skybridge Dubai which is the latest addition to its several megastructures is a 150m long bridge which is 48 stories high. This glass-bottom bridge turns transparent once you set foot on it allowing you to see several attractions underneath. Several telescopic cameras help you get a 360-degree view of the entire city.

Does the Skybridge Dubai have an entry charge?

What is the height of Skybridge Dubai?

The Skybridge Dubai is 48 stories high and is at least 150 meters in height.

What is inside the Dubai Frame bridge?