3 Gorgeous Bridges Near Esplanade – Theatres On The Bay Singapore 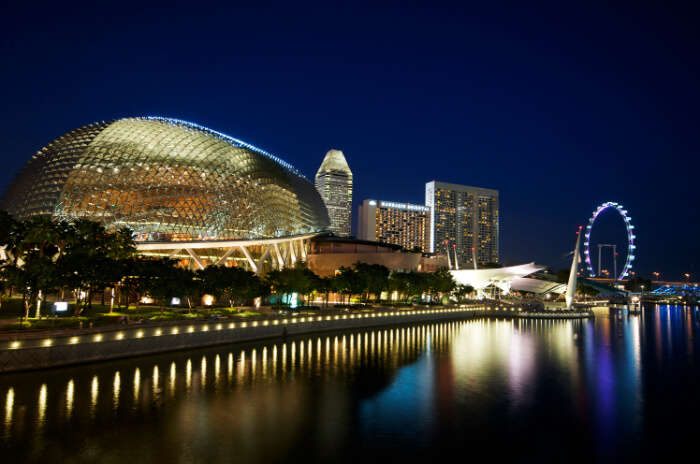 Located near the mouth of iconic the Singapore River, at the Downtown, Esplanade – Theatres On The Bay Singapore is a performing arts centre in Singapore. It was named after the nearby Esplanade Park. The theatre has a concert hall which can accommodate about 1,600 people. The capacity of the theatre is about 2,000 for the performing arts. There are many bridges near Esplanade – Theatres On The Bay Singapore.

3 Bridges Near Esplanade – Theatres On The Bay Singapore

Here are the best bridges near Esplanade – Theatres On The Bay Singapore that you musr surely visit at night for stunning views:

The Esplanade Bridge is a road bridge which is 261-meter long and has been built across the mouth of the Singapore River located near Singapore with the Esplanade – Theatres on the Bay. This is a low-level concrete arched bridge which measures 230 feet (70 metre-wide). The bridge provides support to 2 four-laned carriageways and walkways along both sides. The Esplanade Bridge was constructed with the objective to enable much faster vehicular reach between Marina Centre and Shenton Way which is a financial district. The bridge also minimizes the traffic from Connaught Drive and St Andrew’s Road.

The Esplanade Bridge’s construction had started in early 1994 and got completed in March 1997. The first bus route that passed over the Esplanade Bridge was Service 501. Obayashi Corporation was the main contractor company involved in the construction of the bridge, whereas Light Cibeles was the company that designed the street lamps. After the construction of the bridge, it was realized that it is blocking the view of the Merlion statue from the waterfront of Marina Bay. So the real statue of Merlion was made to relocate to the front of the bridge from its backside.

The stunning design of the popular Helix Bridge is a result of the combined efforts of an international team. This team comprised Cox Architecture – Australian architects; Arup engineers; and Architects 61 – a Singapore based company. A striking feature of this bridge is the canopies that were installed within the inner spiral to provide shade for pedestrians crossing the bridge. These canopies were made with perforated steel mesh and fritted-glass. There are 4 special platforms for viewing on the Helix Bridge that have been placed at the chosen location. Standing at these viewing points on the bridge, one can enjoy some of the most astonishing sights of the skyline of Singapore and all the events that take place within Marina Bay. The bridge is illuminated at night to highlight its unique double-helix structure. The bridge had been built in the design of a lefthanded DNA structure, which is opposite to a normal DNA structure present on our planet Earth. And you would also see pairs of colored letters c – g and a – t lit up on the bridge. These letters represent the four bases of DNA, namely – cytosine, guanine, adenine, and thymine. This unique and well-thought design of the bridge has helped it win several awards in design and transport.

Plan a trip to Singapore and visit all the stunning bridges near Esplanade – Theatres On The Bay Singapore.