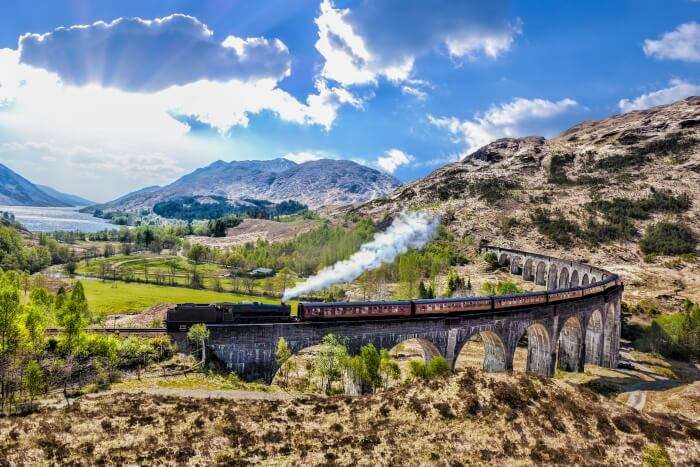 Beautiful coastal scenes, awe-inspiring viaducts, and adventures at every turn, these breathtaking UK train journeys will give innumerable memories for you to cherish. From the lofty Scottish Highlands to the sun-baked Cornwall cliffs, you can get yourself absorbed in the British scenery while simply sitting on the comfortable upholstery of a railway carriage. Journey through the historic sites and scenes of Britain and keep your camera always ready.

Whether you are traveling solo or with friends and family, having a knowledge about the routes is always important. This is why we have created a list of 12 great British railway journeys tours for you to enjoy without any hassle.

Image Source
Journey over the Glenfinnan viaduct, which is an iconic bridge as it has been featured in the Harry Potter movies. The Potterheads are sure to get extremely excited when traveling over this route. Sit back in the carriage and soak in one of the most dramatic sceneries in the United Kingdom. Feast your eyes on the rolling hills, lofty mountain peaks that seem to kiss the sky, and the lakes that glisten at their feet. The 67 km journey from Fort William to Mallaig will ensure a mesmerizing experience.

The Caledonian Sleeper train allows you to access several renowned Scottish locales from London. Departing six nights per week from London Euston station, the Sleeper takes an overnight journey with the passengers waking up to the Scottish greenery in the morning.

The Sleeper is so popular that new cars will be added to the existing ones in 2019, with updated facilities like comfort feasts, stylish cabins with double beds and attached bathrooms among others. No other train offers you a chance of making friends over drinks at the train’s bar or savoring the delicacies served aboard the Caledonian.

Image Source
Curving along the spine of the coast and the Exe Estuary, the Riviera Line departs from the Exeter city center. The Riviera offers unbelievable sights and scenes of the sea and the coastal towns especially Teignmouth and Dawlish.

This train is for people who love the sea and cannot bear to take their eyes off it. You would be stunned at the beauty of the English Riviera as the train snakes its way along the beautiful British Coast. As an added incentive, the train allows your furry buddies aboard.

Starts from Exeter and ends at Paignton

If you want to click Instagram-worthy pictures of verdant valleys, rolling downs and medieval looking barns around the moors, then this is the route for you. More than half the journey between Settle to Carlisle runs through the beautiful environs of the Yorkshire Dales National Park.

Expect getting floored by the Ribblehead viaduct that has 24 huge arches. The viaduct is 31 m high and 400 m long. With Pen-y-Ghent mountain, which is one of the scenic Three Yorkshire Peaks, in its background, the viaduct is a sight to be seen. And don’t worry if it gets cloudy or starts raining, the route will live up to its expectation of affording some of the best views from a railway carriage in the UK.

Starts from Settle and goes to Carlisle, England

Passing several noteworthy landmarks along its way to Edinburgh, the Flying Scotsman starts its journey from central London. Its 630 km route passes through the charming countryside and offers myriad views of exceedingly beautiful scenery.

The almost four and a half hour journey also crosses the Northumberland coastline and is an overall relaxing and comfortable journey. Be sure to keep a lookout for Antony Gormley’s Angel of the North sculpture with its 54 m wide wings!

Starts from London King’s Cross and ends at Edinburgh Waverley

No need to trudge your way to the zenith of the highest mountain in Wales—Mount Snowdon. The Snowdonia will do it for you. This Circa 1896-train huffs and puffs its steady way to the peak of the mountain and gives you a 30-minute stopover to take in the view.

On a clear bright day, the whole vista of the lake and the mountain is spread out for your oohs and aahs! The café at the top takes care of your stomach and acts as a shelter if the weather changes for the worse (don’t worry, when in Wales, do as the Welsh do!)

Image Source
The erstwhile Penzance Sleeper was refurbished, renovated, and re-launched in 1983 with a swanky new name—Night Riviera. It runs six nights each week, starts from London Paddington and stops at various places including Exeter, Taunton and Reading before it reaches Cornwall. From here on, it pays a visit to many locations like Newquay, Plymouth before ending its journey at Penzance.

This is one of the famous routes, so be sure to confirm your bookings in advance for the best British railway journeys. You can book a seat or an entire cabin and allow the amazing food and services onboard the Night Riviera to take you on a memorable experience.

Starts from London Paddington and ends at Penzance

Image Source
This one will remind you of the famous poem –”A view from a railway carriage”! Allow this journey with its impressive views of viaducts, emerald countryside and quaint little villages and towns, to keep you enchanted. Keep a lookout for the world heritage site—an aqueduct at Pontcysyllte, which takes on the mirage of a stream in the horizon.

Enjoy the Romanesque style of Chester and the rustic British sights from the luxury of your carriage.

Starts from Chester and ends at Shrewsbury

Suggested Read: 8 Places You Should Head To For Experiencing The Rocking Manchester Nightlife

If you haven’t seen the Welsh countryside then you have not really enjoyed the best views of Britain. Take the Conwy Valley line from the picturesque cove of Llandudno’s Queen of the Welsh Resorts and allow the Welsh magic to bewitch you. This 30-mile route moves through the valleys of Conwy and Lledr.

The scene is a veritable kaleidoscope of ever-changing vistas of rolling hills to golden pasture lands to craggy mountainsides and the grandeur of the Snowdonia National Park. The trains on this route snake their way 790 ft above the sea level and also take you through a single-bore tunnel which is the longest in Wales.
Starts from Llandudno and ends at Blaenau Ffestiniog

Image Source
Take this line to introduce your eyes to the rich heritage, sprawling countryside, and world’s renowned museums of Britain. The journey will begin from one of the oldest railway stations of the world—Crewe.

As you relish the various sites along the route, let your eyes also soak in the view of the charming city—Stoke-on-Trent fondly called The Potteries, which boasts of prize-winning museums and the fashionable Staffordshire Hoard.

The line ends at Derby which has its own unique place in the cultural and historical scene of Britain. Don’t forget to explore the neighboring Peak District.

Starts from Crewe and ends at Derby

Suggested Read: 10 Castles In United Kingdom Which Reflect The Charismatic Heritage Of The Country!

Image Source
The moment you see the hills and rivers of Highland Perthshire, mountains adjacent to the Spey Valley and the Cairngorms National Park, you will understand the reason why the Highland Main Line has come to be regarded as one of the most beautiful railway lines in the world. There is a lot to explore along this route!

See Dunkeld & Birnam’s historic station along with its signal box, the beautifully maintained Pitlochry Victorian station and Dalwhinnie, a station known for its whiskey distillery.

Alight at Carrbridge and get lost in this historic village. Click photographs of the extraordinary Blair Castle, Old Pack Horse Bridge, Kincraig Wildlife Park, and the Ruthven Barracks.

Starts from Glasgow/Edinburgh and ends at Inverness

Image Source
What is the better way to enjoy the coastal towns of Britain than the Inverness-Kyle of Lochalsh line. You get the opportunity of traveling across the mighty highlands and sneaking under the shadows of the downy mountains next to the many glittering lochs and vast moors.

Next to Inverness is Dingwall, a quaint market town which is the best place for a stop-over. Connect to the Far North Line from here and let the train take you past the mountains of Torridon Peaks.

Starts from Inverness and ends at Kyle of Lochalsh

Further Read: 10 National Parks In United Kingdom That Will Bring You Closer To Nature

When you will be traveling in the picturesque lands of Britain, these railway tours will make your experience convenient and more exciting. Make your vacation to UK worthwhile by experiencing British railway journeys and witnessing the bridges in all their glory.