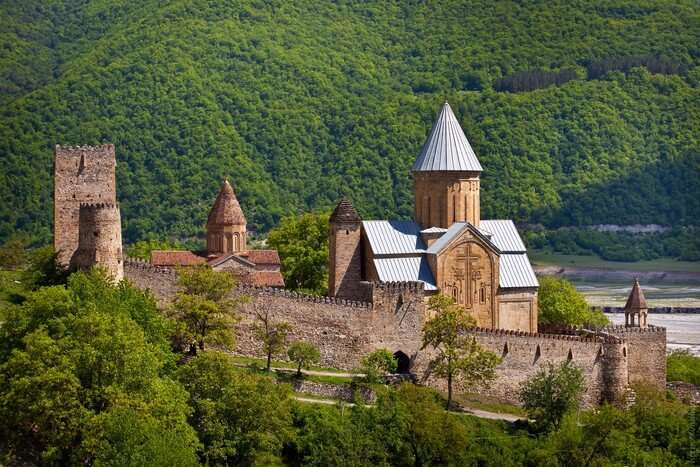 Georgia may not be a big country, but it has played an important role in the history of Europe. Its location on route from Europe to Asia ensured many countries targeting it for gaining dominance in the past. That is a reason Georgia is home to so many castles and forts. The white castles in Georgia and others were mostly built to safeguard the cities from foreign invaders. Each of the castles in Georgia has some interesting story tied to its origin. These are not exactly many castles in Georgia for weddings that you may book, but the historic edifices contain enough attractions.

Listed below are some of the popular and historic castles of Georgia that you must visit while holidaying there to treat the historic buff within!

The Gori Fortress or Gorisitsikhe is located on a hilltop, in the city of Gori. It was constructed in ancient times and mention of it can be found in the 13th century manuscripts. It was attacked several times in the past owing to its strategic location. The fortress has undergone several rounds of renovations as well. The last major renovation took place in 1774. The huge citadel is made mostly of cobblestone and it received some serious damages in an earthquake in 1920. The herringbone patterns in the walls of the fortress are worth noting. A cobblestone walking path is there to reach the hill top citadel.

Must Read: 10 Fascinating Things To Do In Georgia To Make The Most Out Of Your Vacation

The Narikala Fortress is among the most important castles in Georgia county. It is located on a hilltop in Tbilisi. Overlooking Tbilisi, as well as river Mtkvari, it is a fortress with two parts. Over the centuries, it was renovated and expanded by the Georgian rulers. The main fortifications were built back in the 17th century. A large part of this fort was ravaged by a severe quake in 1827. The castle is remarkable with strong walls, towers and rugged architecture. Reaching the fortress is possible through ropeway which was set up a few years back.

This is among the top and popular castles in Georgia. Located on Zhinvali Dam banks, the Ananuri fortress has turned into a major tourist magnet in Georgia. The walls and large towers are remaining. The castle is easily accessible by using public transport. Made on the Aragvi river banks it was the residence of the Aragvi Eristavi – Dukes dynasty. It was on the famous and Great Silk Road. The site now has the bell tower and 3 churches alongside the main citadel. The Church of the Assumption was set up in 1689.

Suggested Read: 9 Places To Visit In Georgia That Are A Surreal Blend Of Beaches, Farmlands, & Mountains

Located in the beautiful village Tsikhisdziri, the Petra fortress is a historic citadel in Georgia. It is protected by the rocky terrain and terrestrial fence. The archaeological complex houses the citadel, ruins of a palace, agricultural buildings and an antique bath. Its name is derived from the Greek word “Petra” which denotes rock. It is now in ruins, but you can still find remnants of an ancient Church with 10th century origins. The stepped terraces are noteworthy and so are the remains of the basilica.

This ancient era fortress is located in the southern Georgia’s Meskheti region. Owing to its location, it has faced attacks from several foreign invaders, including the likes of Alexander the Great. The fortress was occupied by the Turks for a long time as well. It is located at confluence of Paravani and Mtkvari rivers and overlooks the village of Khertvisi. It also happens to be among the biggest castles in Georgia. While the first fortification can be traced back to 2nd century BC the existing fortress was set up in the 14th century. The eastern wall of the citadel has 2 tunnels connecting it to the river below. The castle can be reached from Akhaltskha.

Suggested Read: Things To Do While Celebrating Christmas In Europe: A Perfect Vacation

As a matter of fact, Gremi was built as a temple complex, but over the years it has been called a castle. Standing above the lush green valley of Alazan, Gremi is a major tourist destination in Georgia. It used to be the Kingdom of Kakheti capital and monarch Levan of Kakheti, renovated it in the 16th century. It was ravaged by the Persian invaders in the 17th century. In the ruins of the medieval era castle, you can still see wine cellars, bath, merchant stalls etc. The bell-tower has been made a museum where you can see the 16th-century cannon and some important archaeological artifacts. The restored castle also has a ground floor museum. It is located approximately 20 km from Telavi and public transport is available.

Located in Georgia’s Shida Kartli and northern part of Surami town, this is an historical citadel which has become a popular tourist destination. It is located on a rocky hill formation. There are conflicting theories regarding its origin. A number of invasions led to severe damages to the fortress. It went under the Turk rule in 1692. The architecture interesting and there is a church in the complex.

Further Read: Guess Which European City Gets The Title Of World’s Most Liveable City This Year!

These are but a few of the most enchanting and beautiful castles in Georgia that deserve a visit on your next trip to the beautiful state of Atlanta! So, don’t think too much and plan a trip to US, head to Georgia and be sure to pack your DSLR to capture splendid shots of these castles in its serene settings.