Castles In Norway: 8 Places To Give WIngs To Your Fairytale Fantasy 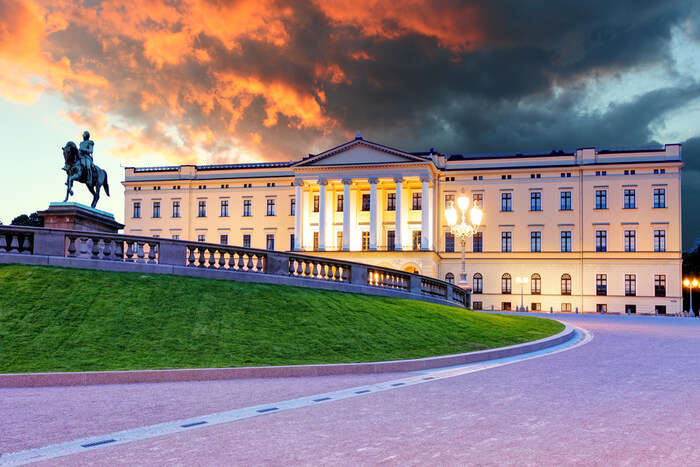 Norway’s harsh and poetic charm made popular by Scandinavian epics is revealed in the majestic architecture of old castles in Norway. They stand as the true symbol of the courage and bold spirit of this country.

The area is covered in a thick layer of snow, seldom in the warmth of the sun, and the castles seem to glow in the spectacular landscape. These real-life fairytale castles will directly carry you to a mystical universe.

Best Of Castles To Visit In Norway

Ranging from fortresses made in the 13th century until the early 20th century, castles are worth touring when visiting this country. You can travel to the most picturesque castles in Norway and explore their stunning architecture. Here are a few:

This is a medieval castle located in Oslo city center. The construction of the castle started in the late 13th century lasting till the 14th. Initially, it served as a prison for lawbreakers, but after the Swedish attacks, it became a fortress. Akershus castle or Akershus Fortress is still a military district. While touring the castle you can view its royal mausoleum, the reception rooms, and banquet halls.

This castle is open to the public daily until 9 PM but is closed during special events and public holidays.

Must Read: Want To Visit Norway In Winter? This Guide Will Help You Plan Your Trip Well

Gamlehaugen Castle is located in Berge and was built in the year 1901 in the architectural style of a Scottish castle. In 1927, the Norwegian royals acquired this castle when they visited the scenic town. Many sections of this castle are open to exploring.

The palace looks like a classic fairytale castle with the Gardens of Gamlehaugen making it more attractive. As this castle is one of the most famous ones in Europe, Berge is a special Schengen destination.

During the Civil war in Norway, Sverresborg was the location of numerous battles. The castle fell to the Baglers and was ruined. However, was reconstructed by Håkon Jarl. The site was again fortified in 1248 by King Håkon Håkonsson after being damaged in the fire. The medieval castle endured until the mid-16th century but fell to ruin thereafter.

Built in the late 1100s, it’s believed that the fortress had an interior of wood and exterior wall of stone. It is situated just 250 m northeast of Bergenhus Fortress. It was constructed on the orders of King Sverre Sigurdsson. The property still serves the military of Norway for office administration but is also open to public visits.

Suggested Read: Grab This Chance To Tail The Aurora Northern Lights All Day In Norway

Bergen’s Royal Residence was built in the 13th century for King Hakon Hakonsson. Constructed close to the Rosenkrantz tower, the fine Renaissance building has been expanded several times. This impressive fortress is open to the public year-round.

In 1261, Håkon’s Hall was built for Norwegian King Håkon Håkonsson. Tourists are allowed to climb up to the roof, where they can enjoy the wonderful landscapes of the city. There are more sightseeing options in other sections of the castle, such as the dungeon.

Image Source
The charming Scandinavian fort is overlooking the entrance to Bergen Harbor since the 16th century. Wander up the walled remnants of Sverresborg to a stronghold constructed around 1660 on the relics of an ancient 12th Century castle.

While visiting this fortress, you must invest a couple of hours in the famous Museum of Bergenhus Fortress that showcases the benefaction of women and several defense groups during the German invasions. It is open for the public from 6:30 AM – 11 AM

Oscarshall Castle is situated on Oslo’s Frognerkilen fjord, which was, from 1863 till the 1990s, the residence of Norway’s royal family. Oscarshall was constructed by Danish architect Johan Henrik Nebelong between 1847 and 1852, as commissioned by King Oscar I. It has been at the King’s disposal since 1863. It is one of the foremost national memorials and contemplated as neo-Gothic gems in Norway.

The spot includes the main building, a park that heads further to the water and an open arcade.
The castle is open to the public during the summer and is closed on national and religious events.

Constructed by Olav Engelbrektsson, Norway’s last Catholic archbishop, between 1525 to 1532, the castle used to be heavily fortified since its construction. The fortress covers around half of the land on the rocky island which makes it the biggest foundation built by far in the Norwegian Middle Ages.

A midnight opera, organized by Steinvikholm Musikkteater, is held here every year in August since 1993. The opera sheds light on the life and travails of the archbishop.

You can reach the castle by the wooden bridge or through a boat.

Fredriksten fortress is located in Halden, Norway. The construction of the fortress started in 1661 and took 40 years to complete. The castle was blockaded by Swedish forces, which ended in the alliance of Norway and Sweden. It is a famous tourist site which offers a picturesque vista of Halden. It also has a museum. It is better to visit this castle in summers.

This is a carefully curated list of the best of castles in Norway. While there is more to see in this magnificent country, these places highlight both the culture and grandeur of the country. Thus, do add them to your Norway tour itinerary.

Explore Goa In March By Visiting These 15 Breathtaking Places In 2022!

6 Mesmerizing Places To Visit In Narkanda On A Refreshing Vacay In 2022!