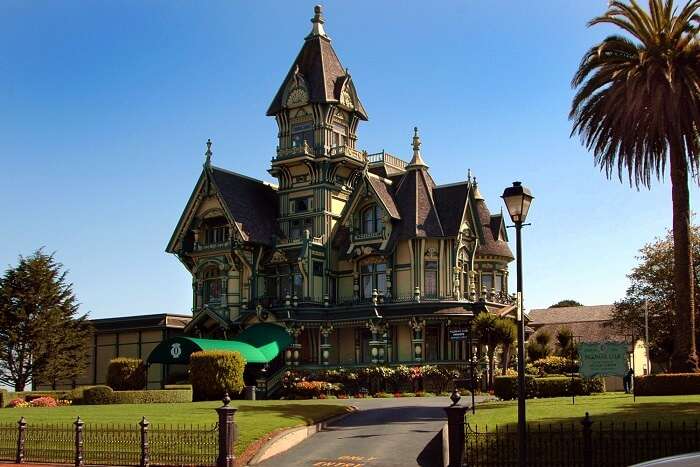 Not everyone is born with a silver spoon in their mouths under a high ceiling embossed with the finest art. But that shouldn’t stop anyone from living the royal, dreamy life, or experiencing it at least once throughout the course of your life. The captivating castles in San Francisco offer more than just the royal experience. They are a one-stop destination for all things vintage: art, interior, vineyards, wine-tasting, lavish decorations and plethora of antiques.

We have put together the list of best castles in San Francisco that offer the vintage experience, so it becomes easier for you to overview, choose wisely and visit. We recommend you to explore as many of these as possible:

Built in the Queen Anne style, in 1985, Spencer House or Spencer Mansion is located on Haight and Baker Streets, close to Buena Vista Park. For most of its history, it has been a private residence, even though it was used as a bed and breakfast in 1990’s. Spotted with its witches cap roof, it looks like something straight out of an old movie. Its spectacular wooden detailing is commendable. Spencer House is a great choice if one wants to spend some quality time with themselves or a staycation with their closed ones.

Must Read: 10 Brilliant Day Trips From San Francisco That You Can Take With Your Globetrotter Buddies In 2021

Located on the Enchanted Hill (as called by William Randolph, La Cuesta Encantada), the property has an ocean view. Spread across 165 rooms and 123 acres of terraces are 25000 artefacts, which one could never grow tired of looking at. Not to miss the waterfalls, pools, fountains and exquisite gardens, the castle is a perfect blend of all the nature’s five elements. One could never get tired of roaming through the reception rooms, museums filled with Roman, Greek and Egyptian antiques, gothic style study and the lavish décor. The art from Europe, East and China is something to be awed at. Moreover, San Simeon, an almost 4 hour drive away from San Francisco, offers more than just the castle and hence, it’s worth spending a weekend, or maybe, an entire week at.

The 13th Century Tuscan castle is merely 80 minutes away from San Francisco. Situated in the Napa Valley, the castle is one of the best Romanesque castles. Frescoes painted across the Great Hall, fireplace brought over from Tuscany and hand-carved tables, blend together to serve a royal experience. Wine and food pairings al fresco is hosted in the courtyard. The wine is stored in the vaulted cellar which is put together with antique handmade bricks.

Facing lush grounds and a small lake with shady tree-like avenues, the castle is a vision, straight out of wonderland. Originally built as a barrel aging facility in 1888, with one large space inside and a second floor, for crushing grapes, the castle is now used as a home. The second-floor apartment was built in 1960. The large room underneath is a tasting room, even today. With massive walls whose thickness varies from 3 to 12 feet, the castle is insulated from heat as well as cold. The conical roofed towers, vast doors and crenellations on the top of the stone castle, make it seem as if the door would open to an altogether magical world.

Located 90 minutes away from downtown San Francisco, the castle offers spectacular outdoor views. Reminiscing a Tuscan villa rather than a medieval castle, the winery is a treat to the eyes and the heart. Every place in the castle is lavish enough to host special events: be it the Gold room, the Barrel Cellar, the Vineyard lawn, the Vittorio’s terrace, the Lower Courtyard or Vittorio’s Picnic area. Not to mention, the wine tastings and food pairings are the icing on the cake. Every year on July 29th, the castle hosts Midsummer Fiesta, which should definitely be on your bucket list.

Started out as a family home, the structure grew into a castle when turrets rose from 17 acres of planted Merlot, slate roofs went on and fountains and landscaping took shape and people couldn’t help but notice. An hour away from San Francisco, this picturesque castle opened the winery and tasting venue in 1997 since the harvests produced were of optimum quality. Even though, it’s a private residence, the doors have been open to those with an interest in wine tasting and touring.

Inspired from the architecture of ancient Greece and Rome, originally, the Palace was built as an exhibition space for the Panama-Pacific Exposition. Built in 1915, the Palace is put together by massive columns, grand rotunda and a pond in the front. Initially, it wasn’t meant to last forever and after the exposition, as the other buildings were removed, the palace somehow held its ground. Even though, it was slowly falling into ruins, it was restored with the contribution of philanthropist and businessman, Walter S Johnson, and the never-ending support of the public. It was opened as the Fine Arts Theatre in 1970. Weddings, corporate events and concerts are organised at this historic venue.

This might just be the castle with the most diverse history in USA. The Victorian mansion with its intricately designed windows, turret, columns and balconies can be owed to William Westerfeld’s bakeries and candy confectionaries. A part of the castle was later used as a Russian nightclub. It was finally brought to peace by Jim Spiegel who restored the rooms, one by one, each and now is owned as a private residence. Fascinated by the house since he was a child, the owner got the house blessed by a Buddhist Monk.

Made from solid stone, the multi-storey Norman style keep was built as a home and was later converted to the Albion Ale and Porter Brewery. Offering panoramic views of the Golden Gate Bridge and the bay, the castle was declared as a historical landmark in the 1970s. The most fascinating fact about the castle is that it was placed over natural fresh springs. The medieval castles had a water supply indoors, usually a well inside the courtyard. In fact, beneath the Albion Castle there are hand cut tunnels into the hillside rock. The castle, although covering only 2000 sq. feet, is available for photoshoots, movie making and special events.

Located at the shores of Emerald Bay at Lake Tahoe, the castle was built in Scandinavian style in 1929. The place has a rugged stone exterior and 38 rooms that are detailed from photographs taken by the owner Mrs. Knight along with her nephew and architect Lennart Palme. The photographs feature churches and castles of Sweden, Norway and Finland. The castle is a perfect fit for those looking to take shelter from the ever fast moving materialistic world and spend some time in nature’s company.

Built in 1928, the co-ed residential hall was a gift to the University of California. One could say that the castle resembles the stately English manor home. Placed on the National Register of Historic Places in 1989, the place still serves its original purpose, even after undergoing several changes, renovations and additions. One cannot miss the grandeur of this castle while wandering on the campus premises.

Another castle built in Queen Anne style, this is described as one of the most photographed buildings in the US. Built by William Carson, the three-story construction consisting of eighteen rooms still carries the owners initials, W.C. worked into the wrought iron balcony. The fairy tale castles features turrets, gables, cupolas, complex windows, porches, pillars and a huge amount of detailing, both inside and outside.

Further Read: 9 Best Food Festivals In San Francisco Which Will Be Paradise For Every Indulgent Foodie!

These castles in San Francisco are waiting to be explored. From vineyards to antiquities, from picturesque views to golden grandeur, from rich architecture to untouched nature, San Francisco has plenty to offer. The rich history and peculiarities of each castle will make your experiences more interesting. Every castle has a million stories to tell. Do not wait any further and book your ticket to USA now.

Christmas In Phoenix: 10 Amazing Experiences To Celebrate The Vibrant Festival

New York In Winter: 10 Wintry Attractions That You Must-Visit In 2022!