Chinese New Year 2020: How And Why It Will Redefine #CelebrationGoals 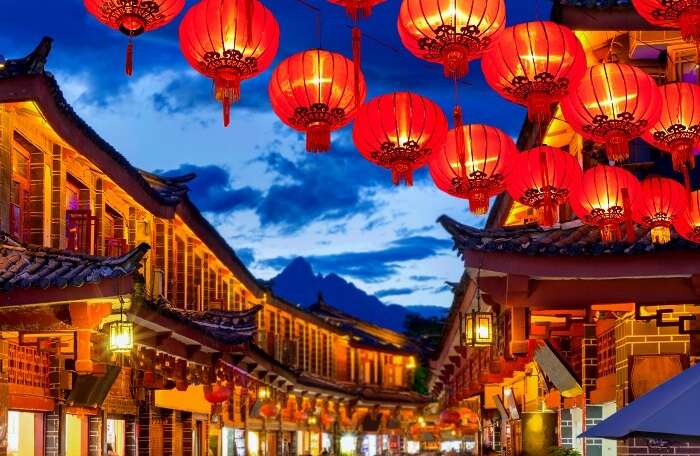 Fireworks, parades, red envelopes, lanterns, and everything beautiful associated with the Chinese New Year makes it a fascinating event worth witnessing. The glitz and glamour involving the gorgeous decorations with the traditional & modern activities would undoubtedly set celebration goals for you.

Wondering how? Scroll through and we bet you would agree with us!

Suggested Read: At Harbin Ice Festival In China, Lose Yourself In A Winter Wonderland

Before we get to how the Chinese New Year 2020 is going to be exclusive, here are the dates for the coming Lunar New Year’s Eve so that you can plan your holiday and trip in advance!

In 2020, the New Year’s Eve would fall on 24th January, Friday, and the celebrations would kick-start & continue for the next 15 days, and end with the Lantern Festival on 8th February, Saturdayday. Since 2018 was the Year of the Dog, 2019 the Year of the Pig, 2020 is the Year of the Rat, the next animal on the zodiac list.

Must Read: 15 Places Across The World For Instagram-Worthy New Year Pictures

Personality Of The Rat

For those born in the year 1960, 1972, 1984, 1996, 2008, and 2020 fall under this zodiac sign, and are considered to be optimistic and likable by all. Clever and energetic are some of their qualities that make them outshine than the rest of the people around. Apart from this,success, and wealth is what the year awaits.

As per the Chinese astrology, the lucky colors for the Rat are green, blue, and golden; while the numbers are 2, and 3

The festivities begin a week in advance from the New Year’s Eve, and it involves a lot of day to day activities that keep the zest and zeal alive. The last week of the last lunar month involves tasks like worshipping the kitchen god, shopping for the festival items and new clothes, cleaning up the home thoroughly, pasting festival couplets, having a reunion dinner, watching TV, and setting off fireworks.

The new lunar year begins with indulging in delicious dumplings, visiting the close ones, and setting off fireworks again on the first day. Whereas, the second and fifth day of this long celebration is all about worshipping the god of wealth and welcoming him home. While these are all traditional activities and a lot has changed, what hasn’t changed is the Lantern Festival on the 15th day of the first lunar month. The celebration on the last day still witnesses a large number of lanterns touching the sky with people savouring rice dumplings and guessing lantern riddles.

The modern twist to the Chinese New Year activities is the party and travel mode, which people have started getting into once the holidays start. It’s not just about meeting and greeting family now, but also taking time off work and relaxing oneself.

Feasting is one of the most essential and significant parts of the Chinese New Year festival, where every food symbolizes something. The culinary treats start from making noodles a staple diet for the first five days and round dumplings for the 15th day. The noodles are known for symbolizing longevity and happiness, dumplings are equal to wealth, and fish means an increase in prosperity.

A few other popular food items that are had during these days are spring rolls, fruits, niangao, and tangyuan which reflect wealth, higher income, and family togetherness. The whole fifteen-day celebration is no less than a binge carnival!

Suggested Read: Indian Restaurants In China: A Taste Of Home In The Oriental Heaven

Best Places To Visit In The World For Chinese New Year

The already vibrant Kong reaches a new peak of bling during the Lunar New Year. From the lively parade in Tsim Sha Tsui to the spectacular fireworks over the Victoria Harbour, the region celebrates the festival quite enthusiastically. Be it the flower markets or the temples around, every bit of color adds to the festive charm.

Not just this, Disneyland has your favorite cartoon characters all dressed up in traditional Chinese attires, and the streets become the stage for the Dragon Parade.

The celebration level in Singapore is magnanimous when it’s the Chinese New Year. You wouldn’t just get to witness the fireworks, but also aerial acts, live performances, floats, jugglers, and much more. The Chinatown during this time is at its best, and the world-famous Chingay Parade is an absolute delight to watch.

Singapore wouldn’t just stop surprising you. The lion dance competition, shopping and lip-smacking delicacies in the street bazaar are ideal for a truly captivating experience!

Suggested Read: 10 Places In India To Celebrate New Year 2020 At Least Once

Being the homeland, visiting Beijing during this festival would be no less than a cultural joyride. While the sky keeps brimming with fireworks, the streets shine with fairs, parades, and performances. It also offers the best opportunity to shop local handicrafts and savour the authentic Chinese cuisines.

If you’re looking to escape some place out of Asia, London is the answer. With the largest level celebrations as per some sources, the Trafalgar Square would leave you in awe. A zillion number of people come together and participate in the festivities, which include all the Chinese New Year activities like the decorations, indulging in food, getting into traditional costumes, and appreciating cultural performances.

After London, if there is one place you can visit for witnessing the best festival celebrations, it is Sydney! Not just fireworks, but the well-lit markets, lanterns, giant parades, and the Dragon Boat Race are some of the highlights of the three week extravaganza here.

How is the Chinese New Year celebrated in China?

The festival is celebrated for 15 days with full fervour in China, wherein decorating the home and streets with red lanterns & couplets, having a reunion dinner, setting off fireworks, colorful parades & performances, giving red envelopes with money to the children, and savouring popular cuisines like fish, dumplings, and more are some of the customs and activities followed by the people.

Why Is the Chinese New Year Called ‘Lunar New Year’?

The Chinese New Year is also called the Spring Festival or the Lunar New Year since it marks the beginning of the new lunar year with the new moon as per the lunisolar calendar.

How long is the Chinese New Year celebration?

The Chinese New Year celebrations go on for about 15 days, where the first day includes fireworks, worshipping of the god of wealth, and more, and the last day is dedicated to the Lantern Festival.

With the festival being celebrated in China, Hong Kong, Macau, Taiwan, Singapore, Malaysia and other Asian countries, along with Australia and the U.S, more than a billion people come together globally and become a part of the 15-day long festivities.

How is the date of the Chinese New Year determined?

The date of the Chinese New Year is determined with the help of the lunar calendar. The festival usually falls every year between 21st January to 20th February on the day of the new moon.

What are the Chinese New Year animals?

What are the taboos associated with the celebration of the Chinese New Year?

While the modern wave has touched the year-old customs and traditions, some of the popular taboos associated with the celebration of the festival are not taking a medicine, washing hair, breaking any object, sweeping, eating porridge, lending or borrowing, and much more.

Great Wall Of China: The Complete Travel Guide For First Time Visitors In 2021

Japan’s Godzilla Theme Park To Open Soon In 2021 And It Doesn’t Get Better Than This!