Christmas In Philippines: A Guide To All The Merry Filipinos Traditions 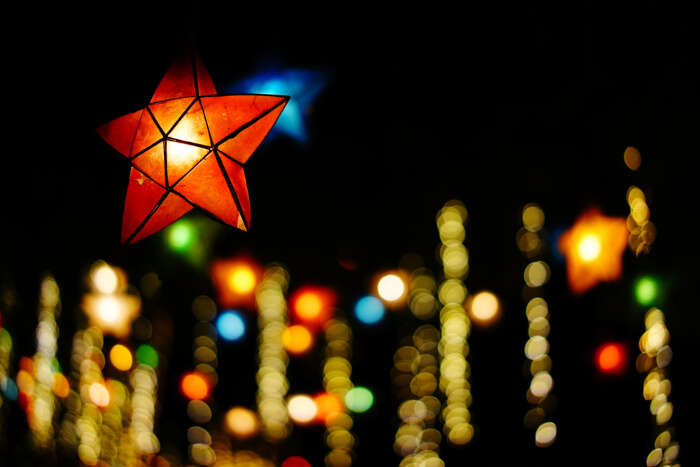 Best Things To Do In Philippines During Christmas

Since the country starts its celebrations as early as September, it becomes hard to choose which time to visit the country and what to do. TravelTriangle brings you a list of the things you can do here along with places to visit and traditions to follow during the merriest time of the year.

1. Make your own Parol 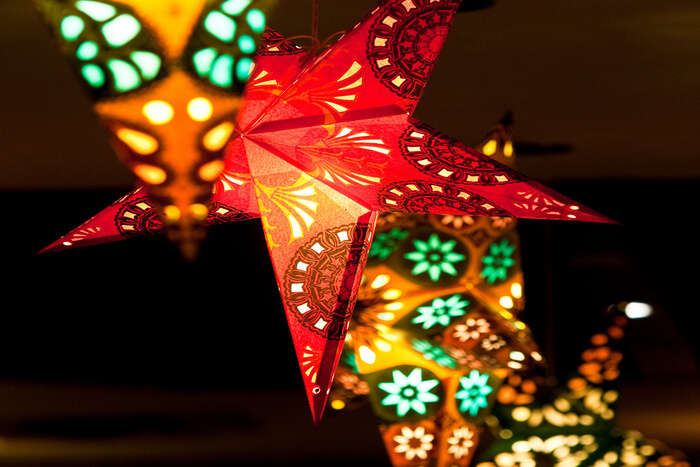 Image Source
Parols are one of the most significant and oldest Christmas traditions in the Philippines. These are basically lanterns, whose frame is made from bamboos and decorating papers. The significance of these beautiful lanterns is that these guided many locals and villagers across the country to churches and chapels for praying. This made them a staple symbol for the spirit of Christmas around the country. Now, it’s a common tradition in the country to make one’s own Parols and putting them up in their homes and other places. You can make your own Parol here, acquainting yourself with the country’s culture and traditions along with lighting up your place and yourself with the spirit of this festival.

Must Read: 10 Colonial Cottages In Philippines To Make The Most Of Your Beach Vacay! 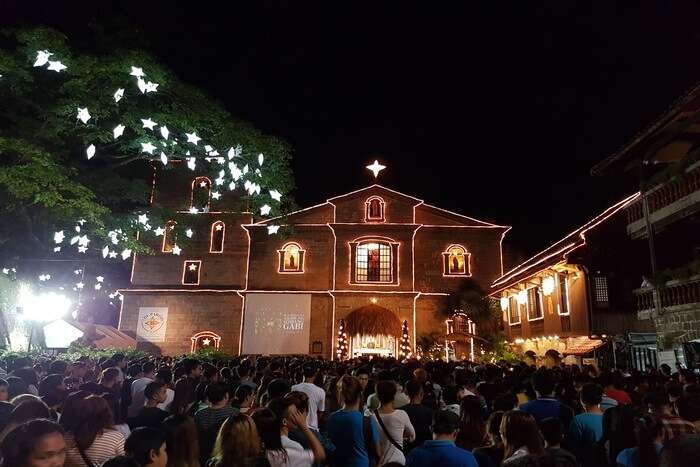 Image Source
This is also one of the longest running traditions in the country. Any devoted Christian has this on their list of things to do here. Simbang Gabi is a nine-day running mass starting from 16th December to worship and pray. Completing this mass is one of the most cultural experiences you can get here. It is done to honor the Virgin Mary and the farmers who worked in the country during the Spanish colonization of the country. The farmers worked very early in the morning to avoid the heat of the sun at noon. The masses respect that by starting early in the morning every nine days and it is said that people who complete this get one wish granted to them.

3. Participate in the Carol 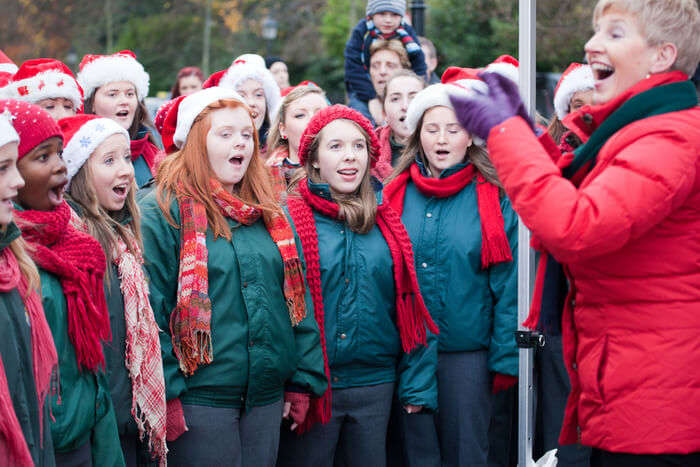 Image Source
Carolling in the Philippines begins during September. This is one of the most famous ways Merry Christmas in the Philippines is made so merry. There are many groups spread throughout the country who go out on the streets and markets and performs various famous holiday songs in both, the native language, as well as English. The best thing about this is that they are very open to everyone and you can join them in their performances if you like to and sing your hearts out. This is one of the most fun experiences the tourists can have around the country, singing merry songs and mingling with the locals. The Carolling over the past few years has also become one of the biggest sources for donations for charities around the country. 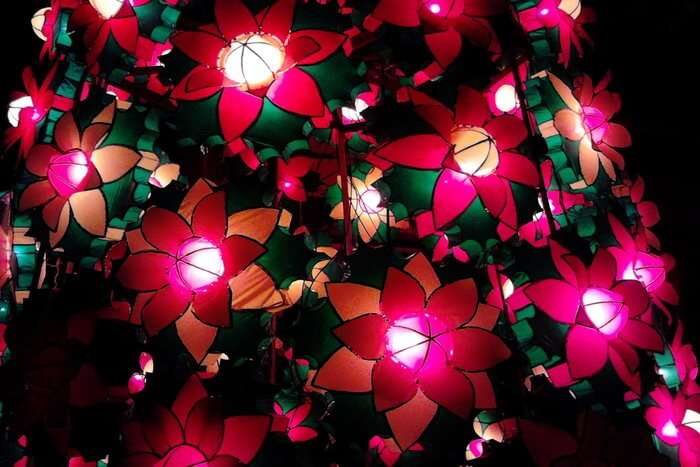 Image Source
Pampanga is perhaps the best place to be at during Christmas in the Philippines. Christmas in the Philippines is really not a complete experience without visiting this city. Pampanga hosts the famous Giant Lantern Festival and has been doing it for the past 80 years. The festival is one of the most aesthetically pleasing things you can see around the world. The whole city is covered in the lights of lanterns made by locals, many of them Parols, and the city shines brightly at night, giving you some of the most spectacular sceneries you will ever come across in your lives. The drive leading up to the city is also breathtaking, making the trip here even better.

5. Be a part of Noche Buena 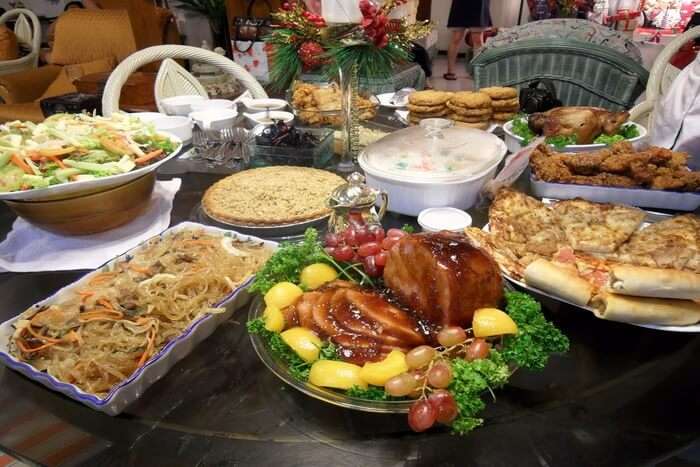 Image Source
One of the best Christmas in Philippines food traditions, Noche Buena is a grand celebration of the festival with a massive amount of food. Primarily a family tradition, the families around the country prepare a lot of food to eat during Christmas Eve, that includes some of the most famous local delicacies like queso de bola, hams, pancit, lechon, puto bumbong and many more things. You can acquaint yourself with the families here, and enjoy the delicious and fulfilling food served during this time of the year. 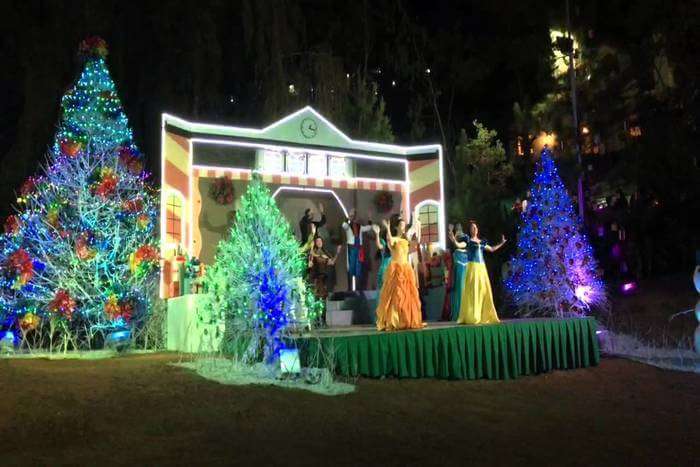 Image Source
A very elaborate Christmas village built for celebrations, Baguio Country club is the place to be for any tourist looking for a spectacular show. The country club opened recently but has become one of the biggest attractions in the country for Christmas for its spectacular light show and artificial snow. The tourists can enjoy a true Christmas weather here, with artificial snow and a cold weather to go with it. The club also houses many structures made from recycling materials from the artists around this time. 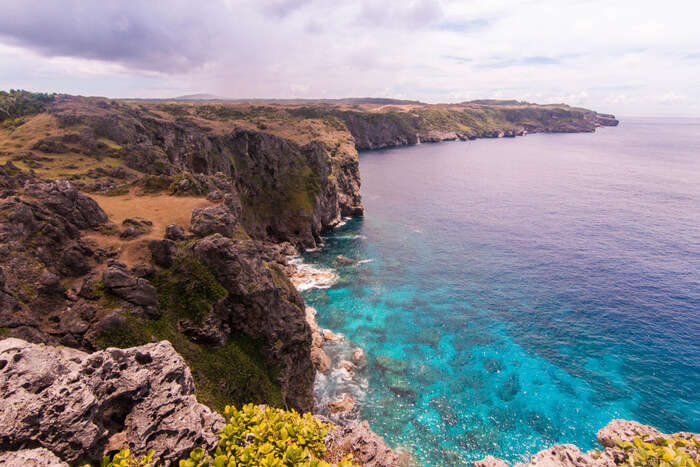 Itbayat is a city that many people like to visit for its cold weather. The northernmost town of the Philippines, this city is situated farthest from the equator, hence the cold weather. For people looking to celebrate Christmas in a cold weather, this is the place to be. Surrounded by mountains and having temperature as low as 5-degree Celsius during its winter months of November to February, this city becomes a winter wonderland for the tourists. Christmas food in Philippines is also one of the biggest attractions of the city, with every place serving local delicacies to satiate the hunger of tourists. Image Source
Being a part of all the Christmas traditions and celebrations and chores and everything else is tiring. So, once you’re done with that, you can head to Davao City to have some relaxing time to rejuvenate yourself and get ready for New Year’s. It’s a long-known Christmas in Philippines facts that this is a place where locals and tourists alike come to have themselves a tranquilizing time. The city also has the highest peak in the country, which you can climb or drive up to, according to your liking and have a magnificent experience of Christmas breeze, with a photogenic view of the city covered in mist. 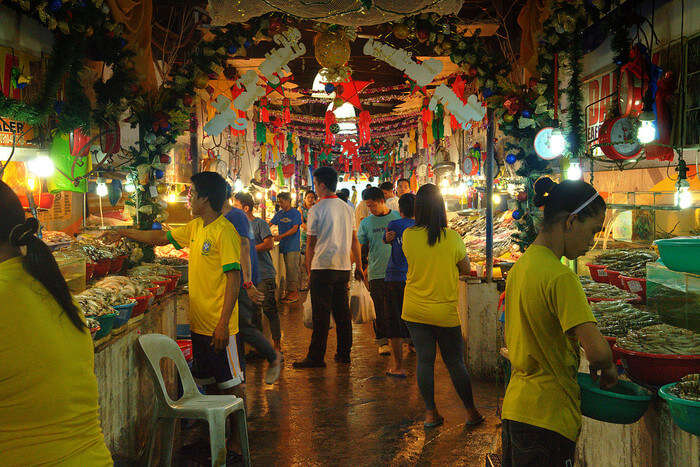 Image Source
During the end of the year, all the malls and shopping places drop their prices, making it a merry occasion to buy Christmas gifts in the Philippines. Since this also happens to be the 13th-month pay for the local employees, the month of December is where most of the shopping in the country takes place, by locals and tourists alike. All the bazaars become more like a celebration of items, where people buy many things and give it to their relatives, friends and the poor. The gift-giving is one of the purest and important traditions in the city, and this month marks a perfect time to get yourself involved in it. 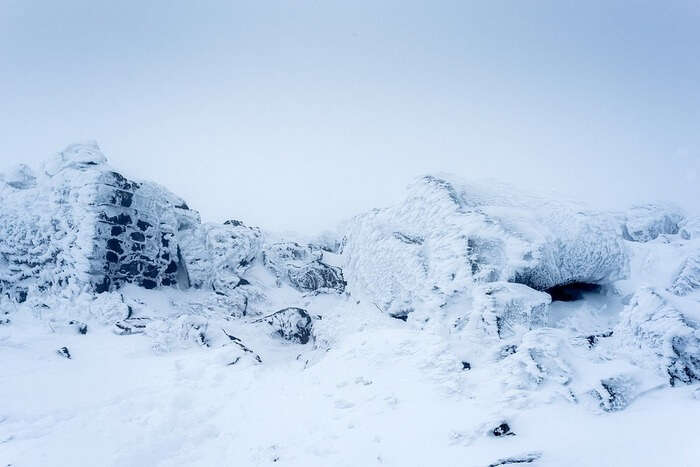 Image Source
For people looking for a more serene and relaxing time and who don’t want to travel far from the city of Manila, this is the perfect spot to hit. Snow World in Star City is an enclosed emporium offering its visitors a chance to experience a snowy white Christmas in the otherwise warm country. With many attractions inside like igloos, snow sculptures, themed train rides for kids, long ice slides and much more, Snow World is a must visit place for families looking for some fun time with their kids.

11. Witness the largest Christmas tree in the country 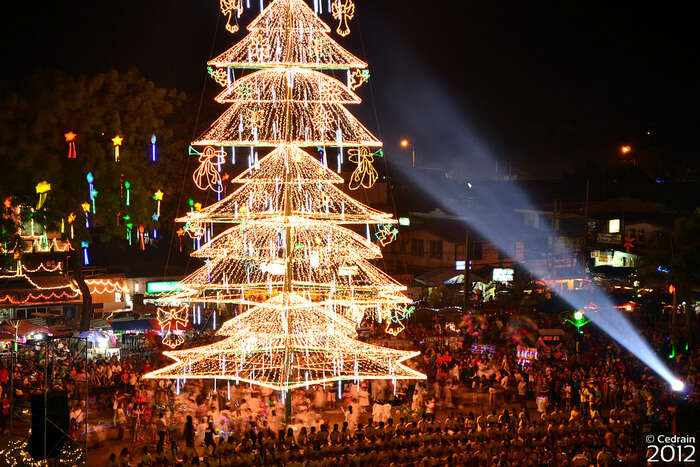 Image Source
Tagum city every year features the largest Christmas tree in the country. It is a sight to behold, as it breaks its record every year, with trees as high as a 20-storey building. The last year’s record was a staggering 180 feet. You’ll have to look at it from some distance to take in all of its beauty. Over the years, it has become one of the biggest local and tourist attractions, to see the tree light up in all its magnificence.

With so much going on for three long months of non-stop celebrations, Philippines certainly delivers when it comes to giving its visitors the best possible wholesome Christmas experience. And with this list at hand of the best things to do here during Christmas in the Philippines, you can be sure that you will take nothing but good memories back with you to share with your friends and families for years to come. So, what are you waiting for? Book your trip to Philippines with TravelTriangle now!

What makes Christmas in the Philippines unique?

Noche Buena and the tasty Filipino food make Christmas in the Philippines unique.

What are the Christmas traditions in the Philippines?

The Christmas traditions in the Philippines are making Parols and caroling.

How do they celebrate Christmas in the Philippines?

In order to celebrate Christmas in the Philippines, there are early masses held that are known as ‘Misa de Gallo’ or ‘Simbang Gabi’. The last mass continues till the first Sunday of January and on this day the Feast of the Three Kings is celebrated.

How long does Christmas last in the Philippines?

Where is Christmas celebrated in the Philippines?

There are many places where Christmas is celebrated in the Philippines with Bacolod City, Zambales, Palawan, Manila, Baguio City, and Cavite being the most popular.

What is the famous Christmas food in the Philippines?

What is the weather like during Christmas in the Philippines?

The weather in December in the Philippines is nothing less than comfortable and pleasant. The temperature hovers anywhere between 22 degrees Celsius and 32 degrees Celsius. 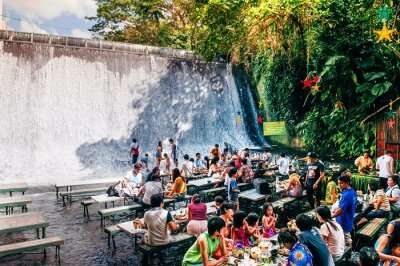 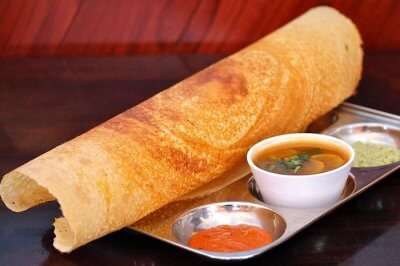 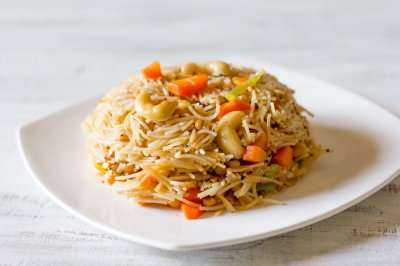