Christmas In Russia: Get Your Festive Mode On And Take A Flight to Russia In 2022 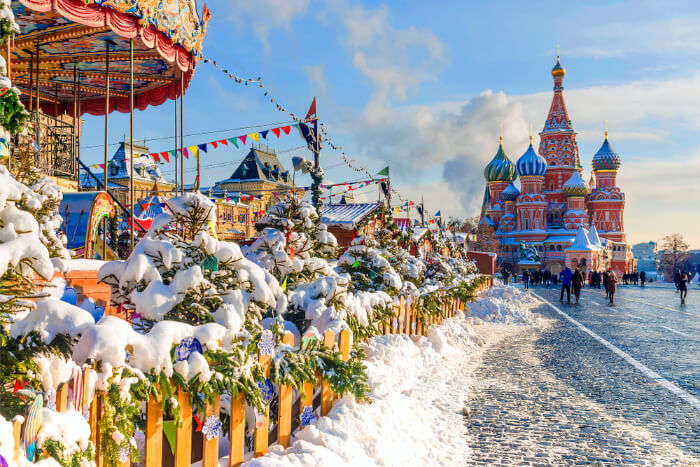 Christmas in Russia which is celebrated in Russian Orthodox church is observed on 7th January annually. A Christmas occasion significance the blessing on the individual homes. During the Christmas Eve feast, eve is celebrated with family and friends making everyone happy. Exchanging gifts is one of the traditions of celebrating Christmas.

Christmas is a great auspicious festival which is annually celebrated all over the world. Primarily it is observed on the 25th December. On this day the born of Jesus Christ is celebrated. The celebration of the Christmas eve is done by decorating the Christmas tree all over the town, greeting people, cutting cakes, going church and much more. What makes this is day special in Russia is its unique customs and traditions. Come, be a part of celebrations of Christmas in Russia during your winter holidays and have a fun-filled vacation experience.

About Christmas In Russia

In the early Soviet days, Christmas was not celebrated in Russia, and even the other religious celebrations were discouraged. Despite all the discouragement, the Christmas celebration in Russia was put up on 25th December by the Soviet regime. All the traditional customs of the Christmas Eve was re-adopted in Russia after the October revolution. Nowadays, traditionally people return to their home celebrating with their loved ones and have a great festive Holy supper. In the present day, Russia is the largest country in the world area wise. Being the largest country, it even has the largest city as its capital called Moscow.

19 Cool And Unusual Things To Do In Russia In 2022 That You’ve Never Heard Before!

The festive of Christmas in Russia is celebrated with a great and grand fashion. The main religion practiced in Russia is Russian Orthodox. Russia had a great number of the Christian population. Thus, Christmas had become one of the major festivals in Russia. Many people do fast at Russian Christmas traditions, many do not eat meat, egg as their customary belief system. The great festival of Christmas includes decorating trees, singing carols, greeting people and enjoying the eve to the fullest. Russia celebrates the eve of Christmas in a white snowy day when the temperature is always falling towards minus degrees Celsius.

8 Places To Visit During Christmas In Russia 2022

Christmas being a festival of gifts does bring in a lot of festive mood. Vacationing at such a time becomes an even joyous affair as you get to see celebrations all round. So, here are a few places you should definitely visit while in Russia in case you decide to take a Christmas trip to this country:

9 Fabulous Beaches In Russia That Let You Relish The Taste Of The Good Life!

Suzdal is considered an ancient place in Russia. This place holds a special place in conserving the ancient monuments. Some of the places which must be visited during the Christmas holidays in Russia are Suzdal Kremlin, Monastery of Saint Euthymius, Museum of wooden architecture and peasant life, Torgovyye Ryady, Uspenskaya Tsekov, Transfiguration Cathedral, Wax museum, Venerable bell tower, Friday church and many more.

Yaroslavl is even one of the ancient place in Russia. It is even considered as a place where ancient monuments and churches are located. Some of the places which must be visited during the Christmas in Yaroslavl are Khram ll’i Proroka, Museum “Music and Time”, Yaroslavl Zoo, Baptist church, Strelka and much more.

It is considered the second-largest city in the world. It is also known for celebrating widespread occasions famous across the entire country and the world. This city is considered as one of the most modern cities of Russia. The places which must be visited during the Christmas holidays are hermitage museum, Peterhof Palace, Moika palace, Summer Palace, Bronze Horseman, Field of Mars, Marble Palace and many more.

Kazan is also popular as the sports city of Russia. The city also played host to the 2018 FIFA World Cup. Some important destinations during the trip to Kazan, Russia are the Kazan Kremlin, Tatarstan, Suyumbike Tower, Epiphany Orthodox Cathedral, Pedestrian Baumana Street, The Farmers’ Palace and more.

Novgorod is one of the oldest cities of Russia dating manuscripts as early as 859 AD. The striking silver and golden domes of St. Sophia’s Cathedral brighten up during December and visiting this cathedral from 11th-century during Christmas is the best. The city does showcase the unique aspects of its celebrations with amazing markets, cathedrals that pull the best of celebrations over the festive time.

An awesome fact about celebrating Christmas at Lake Baikal is that the winters here are milder than the summers. Lake Baikal is a serene paradise that seduces with its exotic beauty! It’s the world’s largest freshwater body and surrounded with stupendous vegetation that assures you a pristine experience for your Christmas vacation!

Celebrating Christmas in Russia and leaving out Vladivostok is a crime. It is one of the finest places in the country to celebrate Christmas. The most impressive characteristic of the city are the markets and events that take place over the city. The lights, citadels, cathedrals and squares are full of festive spirits that runs high in the air.

Weather In Russia During Christmas

Weather during Christmas in Russia is freezing cold. The temperature rounds about somewhere in the range of high of -3°C to low -7.6°C. It is highly important that you stock the maximum amount of woolens in your kitty as it is going to be mighty. However, the average daylight is only going to be about 7 hours which means you can expect a lot of festivities to be celebrated in the evenings which is precisly the best time during the day of celebrating Christmas traditions in Russia.

Different Activities During The Christmas Eve In Russia

The festive of Christmas is celebrated in chilled days, thus Christmas in Russia activities includes the lighting of Bonfire. They light a fire in the honor of Sviatki tradition. Russian people even beliefs in the tradition of fortune-telling. Usually, it is practiced for fun but at some home, it is one of the ancient tradition to be practiced at Christmas Eve. They even sing Christmas carols together with friends and family. They make a great Christmas supper and spend quality time with family. Like the belief of Santa visiting home on the Christmas eve, the Russian people do have a belief of visiting Ded Moroz and Sengurochka in the Christmas Eve. Even decorating the Christmas tree is an important ritual and tradition in the Russian culture. The Christmas tree in Russia has a great fairy decoration with elegant attraction in it.

Traditional Cuisine During Christmas In Russia

The Christmas eve traditions in Russia follows a great supper. Typically, in Russia, some people do follow the vegetarian diet during Christmas Eve and some people even fast. But, Russian Christmas food starting from pork, goose, and other specialty meats are accompanied by delicious cakes and pastries and other wonderful desserts. Even Christmas in Russia traditions offers vegetarian delicacies like stuffed beans, stuffed potatoes, a different form of desserts and much more. Offering these great suppers is a way of honoring the great festival of Christmas in Russia.

9 Hotels In Russia That Are A Perfect Blend Of Modern Culture And Old-World Charm!

How do they celebrate Christmas in Russia?

Russian Orthodox Church is dominant in Russia and they follow the old ‘Julian’ calendar for observing a religious day. Therefore, Christmas in Russia is celebrated on the 7th of January and not on 25th December.

What is a typical Russian meal?

A typical Russian meal usually has appetizers and main course dish which is hot and consists either potato, fish or meat. They are also fond of tea after dinner. Borscht, Solyanka Soup, Olivier Salad, Blini, Kotleti, and Pelmeni are some of the traditional Russian meals.

What is Russia’s national food?

Pelmeni is the national dish of Russia. There are many restaurants in Russia where you can taste Pelmeni and other dishes from the traditional Russian cuisine.

What do Russian eat at Christmas?

Is Christmas banned in Russia?

During the early-mid Soviet period, the state discouraged religious celebrations through the policy of atheism until 1936. Despite this, Christmas was marked by the Soviet regime on December 25.

What is Santa called in Russia?

Russian Santa Claus is also known as “Ded Moroz,” which translates to “Grandfather Frost” in English.

Is Christmas a holiday in Russia?

Since 1992, Christmas has been marked as a national holiday in Russia, as part of the ten-day holiday at the start of the new year.

What is the last day of Christmas called?

The last day of Christmas is January 5, also called “the Twelfth Night.”

What holiday does Russia celebrate in December?