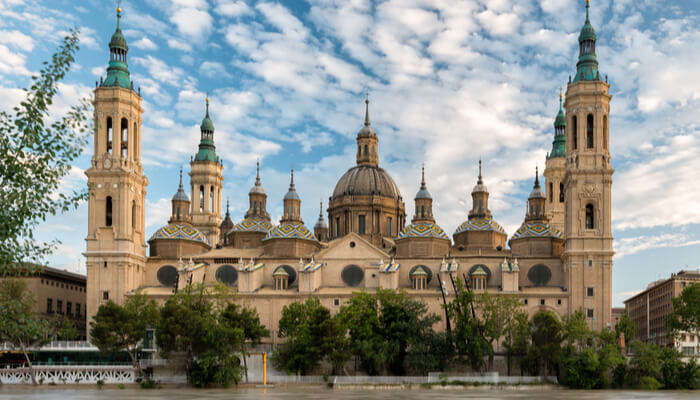 The Spanish charm is such you’ll have your heart stolen with just a quick glimpse. Where wine, Tapas and Flamenco set the mood right, getting your spirits high. Where tomatoes are smashed on each other as a celebration of La Tomatina. Where art and architecture define precision and brilliance. Yes! Spain is all that and more. When it comes to churches in Spain, we know we have plenty of options to look at. But, there are some masterpieces that go beyond spirituality and artistry.

This is the list of most stunning churches in Spain, which alone can be a major pull for you!

The icon of Spanish tourism, La Sagrada Familia Church is the largest church in Spain. It will lure you with its intricacy portrayed not just in the interior but also through its delicately crafted facade. Though it still is under construction, it doesn’t fail to attract people with its beauty and spiritual significance. The construction was started in 1882 and the it will soon be done with. Public tours and religious rituals continue to take place here regardless.

A list of churches in Spain remains incomplete if we don’t find mention of the La Sagrada Familia, as it stands as an inspiring epitome of Art Nouveau style of architecture as well.

Suggested Read: Visit These 7 Places In Barcelona In April To Have An Incredible Summer Vacation

Burgos Cathedral dates back to 13th century when it was commissioned to be built by King Ferdinand III of Castile. The completion took three more years, but the final outcome was worth all these years. Even today, just a glimpse of this marvel will convince you this is a work of finest art and architecture, crafted with an attention to detail. Built with Gothic style of architecture, Burgos Cathedral is dedicated to Virgin Mary and catches attention with its octagonal spires, sculptures of Biblical figures and saints.

3. Basilica of Our Lady of the Pillar, Zaragoza

Located by the stunning Ebro River, Basilica of Our Lady of the Pillar looks like something out of fantasies. This structure flaunts a mesmerizing blend of three architecture styles, namely – Neoclassical, Baroque and Rococo. As you step inside, you will be greeted by the artistic creations of Francisco Goya, a revered painter.

Beside its stunning artistry, the Basilica of Our Lady of the Pillar has legends to narrate; as one mentions that it was built by St. James post his apparition with Saint Mary. St. James is known to introduce christianity to Spain.

Must Read: 10 Best Churches In Zurich One Must Visit In 2021 To Connect With Your Inner Self Once Again!

Perched atop Mount Tibidabo , Temple Expiatori del Sagrat Cor is also known as Expiatory Church of the Sacred Heart of Jesus. The structure is made of stone, using the Romanesque style of architecture and touches of Neo-gothic as well. It is among the latest Christian churches in Spain, completed in 1950, though after a long-hauled construction process. It is located in Barcelona, one of the most beautiful cities in Spain.

One of the most stunning churches in Spain, Cathedral of Santa Maria of Palma is located on the Island of Mallorca. Its construction began in the 13th century and was completed by 1601. Considered among the tallest cathedrals in Spain and Europe, the structure was built on the site where once stood a Moorish Mosque.

The Cathedral of Santa Maria of Palma is also called La Seu and you will witness a blend of Gothic, Gaudi and Catalan architecture here.

Must Read: 8 Best Spanish Cuisines That Will Make You Fall In Love With Spain All Over Again!

An architectural marvel of Spain, Santiago de Compostela Cathedral is built in Baroque style. There are legends that circle this shrine, as the one that states that the remains of Apostle James were brought in to this place by the angles. This remarkable structure holds special religious significance and also serves as the final stoppage for the St. James pilgrimage, which has been followed since the Middle Ages.

Suggested Read: 15 Best Beaches In Spain To Bask In The Tropical Sun For An Exotic European Vacay!

A highly-instagrammed spot for sure, Mezquita of Cordoba is also called the Mosque-Cathedral of Cordoba. Like many churches in Spain, this one too boasts of an intriguing past. It dates back to seventh century and back then it was a Visigoth church, but was later converted into an Islamic shrine. However, it was reverted to a Catholic religious spot in 13th century. In 16th century Renaissance nave was built in Mezquita of Cordoba, and different architectural styles were also seemed to be blended which stands as a symbol of harmony as well.

Must Read: 10 National Parks Of Spain That Will Take The Travelers To Another World

As the horse carriages stand right outside this Gothic Cathedral, you will be convinced you’ve traveled back in time. This was built in the sixteenth century and is centrally located in the city of Seville. It is among the most important churches in Spain as it serves as the final burial spot of Christopher Columbus. Talking of its aesthetics the spires and embellishment are a treat to the eye, conspiring to bewitch the beholder.

Another among the Gothic churches in Spain, Toledo Cathedral was commissioned in thirteenth century by the Ferdinand III of Castile. It was built with white limestone and today it boasts of housing a magnificent collection of big precious stones. The open vaults in the cathedral lets the natural light enter inside, illuminating the interior.

Suggested Read: 21 Captivating Spain Tourist Attractions That Will Make You Pack Your Bags In 2021

Settled amidst lush greenery, Santa Maria la Real de Covadonga was built during the end of nineteenth century. This neo-Romanesque was built using red-hued limestone. This is one of the most beautiful churches in Spain and is jotted in the bucket list of many. Since it is located in a village, this would be an ideal visit for anyone wanting to sneak a peek of real Spanish culture.

Spain is a country where you will witness the best of modern infrastructure and masterpiece architecture from the past. Many a times there’s a blend of both in just one structure. So, to make the most of your Spanish vacation opt for Europe tour packages with Travel Triangle.

What is the church timing in Spain?

Which architectural style can be seen in Churches in Spain?

Can tourists of any religion and ethnicity enter the churches present in Spain?

Yes, as of now tourists of any religion and ethnicity can enter the churches present in Spain. It can be for prayer, event and to see the architectural values.

Which church in Spain takes entry fees from tourists?

La Sagrada Familia Church in Barcelona takes the entry fee of Euro Dollar 17 to 32. The charges are inclusive of the audio guide, and access to the church tower.

Which is the best season to visit the churches present in Spain?

Tourists can visit the churches present in Spain in any season.

Which church in Spain is the most visited one in Spain among international tourists?

La Sagrada Familia Church, Barcelona in Spain is the most visited one in Spain among international tourists. A day trip is necessary to see this church’s architectural marvels.

Which church pilgrimage is under UNESCO World Heritage Site and an important walking trail route for the Spain nationals?

The Camino de Santiago church pilgrim route from Northern Spain is a UNESCO World Heritage Site and an important walking trail route for the Spain nationals.

Churches in Spain conduct masses in what languages?

The church masses are available in Spanish and English in Spain.

A 2022 Guide To Switzerland In March Tailor Made For You

24 Best International Trips Under 50k For Your Bucket List 2022!