6 Best Churches In Toronto To Marvel At The Ancient Architecture 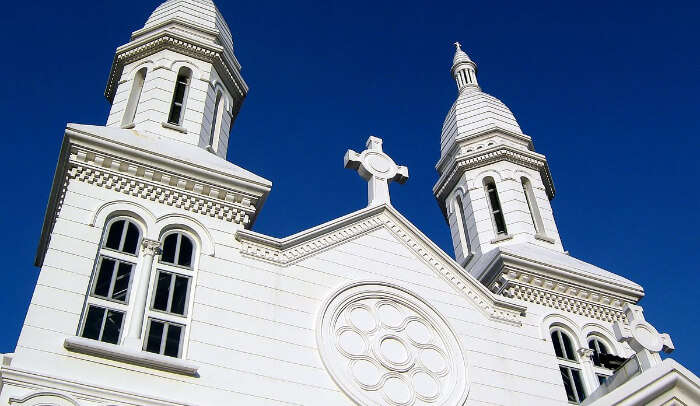 The city of Toronto in the province of Ontario is a major Candian city along Lake Ontario’s northwestern shore that is dotted with stunning architectural marvels that include iconic skyscraper buildings, museums, galleries, beaches, lakes and more. Apart from these are the churches in Toronto that are a stark example of the ancient architectural style that date back to the 17th century. You can stroll the lit up alleys of these stunning churches and marvel at the architecture, imbibe the culture and reminisce the history of Toronto.

Let’s have a look at the six best churches in Toronto that are represent the surreal beauty of the Canadian city and the residents love visiting to imbibe the culture and soak in good vibes.

1. Church Of The Holy Trinity

Built in a Gothic architectural style, the Church of the Holy Trinity is located at 19 Trinity Square, surrounded by the Toronto Eastern Centre which makes its location unique and prospering. The church was built in 1847 by architect Henry Bowyer Lane and the city of Toronto has grown around it since then with rapid expansion so that the church now finds itself in the middle of Toronto’s urban core. The church is about five storeys tall and has distinctive architecture, it includes some unique additions like the twin octagonal towers, which were once used as a navigational beacon.

The cathedral church of St. James in Downtown Toronto was built in 1833 and was one of the largest buildings in the city at the time which represented the Gothic Revival architecture. However, the building was set on fire 10 years later and the Parish House opened its doors again in 1910. Currently, it is a designated Ontario Heritage Property by the Ministry of Culture and Heritage Site by Heritage Toronto. The Ohio sandstone and the white brick exteriors allow as much light as possible into the interiors, lighting up the floor of the building and creating stunning reflections in the high ceilings. The stained glass windows showcasing a Gothic Revival architecture, the pointed arches and pinnacles make for an intriguing visit to the church.

One of the oldest churches in Toronto, it is located at 65 Bond Street in Toronto’s Garden district. St. Michael’s Cathedral Basilica is the cathedral church of the Roman Catholic Archdiocese of Toronto, Canada which was designed by William Thomas and the completion of the tower and spire was done by firm Gundry & Langley in 1865-1867. The interior of the church is divided into a large nave and two tall aisles, which is lavishly decorated after it went through two major renovations. The Gothic architecture and the impressive western facade of the building is worth visiting and exploring.

Located in the heart of the Annex in the city’s downtown core, the church is an activist church in Toronto that has a reputation for being an activist church on a number of social justice issues. The church has strongly advocated for same-sex marriage, fair trade and improved conditions for the homeless. The church was built in 1889, which began as Trinity Methodist Church until it became Trinity United Church in 1925 with church union. Built in the Romanesque Revival style, it was designed by a Toronto architect. Currently, the church has been designated as a Heritage Building by the Toronto Historical Board.

Suggested Read: 9 Best Beaches Near Toronto For A Unique Beach Experience In Canada

This historic church is marked by a beautiful building located in Toronto’s vibrant Greek town, built between 1912 and 1926. Designed by Arthur W. Holmes, it resembles the Basilica di Santa Maria Maggiore in Rome. It is asserted to be unchallenged as the Danforth’s most impressive architectural landmark. The stained glass windows depict different religious passages of the bible and the interiors also include pictures showcasing moments in the last days of Jesus’s life.

Metropolitan United Church is a historic Neo-Gothic style church located in downtown Toronto, it is one of the largest and most prominent churches of the United Church in Canada. After a fire broke out in the church in the year 1928, it destroyed most parts of the church and what remained was the tower, the reconstruction took place shortly after the fire in the same year by architect John Gibb Morton who renovated in an English cathedral style church. The original building was designed by Henry Langley in 1872 in the High-victorian style.

These churches in Toronto are a cerebral part of the city that people often visit to soak in the good vibes, be in touch with god and the culture it imbibes. These architectural marvels are a treat to the eyes and worth exploring, make sure you add these stunning churches to your bucket list while planning a trip to Toronto.

How many Churches are there in Toronto?

There are 42 churches in Toronto. Different types of sub-divisional Christianity is practiced in Toronto, depending upon the subdivision. However, each church has its peculiarity.

Which are the best churches in Toronto?

Church Of The Holy Trinity, St. James’s Cathedral, St. Michaels’ Cathedral Basilica, Trinity-St. Paul’s United Church, Holy Name parish, etc are some of the best churches in Toronto. Each of them has something very different from others in terms of architecture and designing.

What type of architecture do these churches feature?

Gothic revival and neo-gothic architecture have been observed in many of the churches of Toronto. There are many more architectural designs that are used in churches.

What is the average timing of visiting the churches in Toronto?

The usual timing of visiting these churches starts from 10 am and ends at 6 pm. Between this duration, one can visit any of the churches in Toronto.

Which is the oldest church in Toronto?

St. James’ Cathedral in downtown Toronto is the oldest church in Toronto. It was built in 1833 and it is one of the largest buildings in the city.

Is there any entry fee charged by the Churches in Toronto?

The answer is that there are some of the churches in Toronto that charge an entry fee but the entry to most of them is free.

Which is the largest Church in Toronto?

Metropolitan United Church is one of the largest churches in Toronto. It follows a historic neo-gothic style of architecture.

Are there any extra activities or shows being organized by these churches?

Yes, some events are organized in the festive season. Like, at the time of Christmas, or any cultural occasions, the locals of the area and members of the church organizes such activities.