Croatia Honeymoon: All You Need To Plan An Incredible Escape In 2020 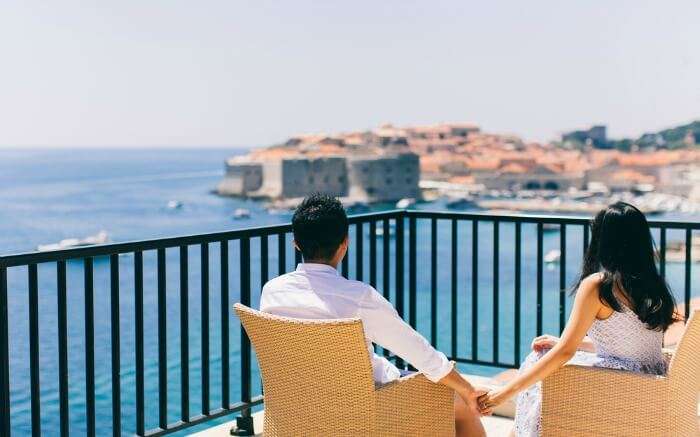 Honeymoon in Croatia can be a spoiling affair! The turquoise sea splashing around the shore that’s tastefully cluttered with brick-red roofed edifices looks like a painter’s fantasy. Yes! These beaches open a wide world of adventure water sports too. The cobbled walkways are dotted with historic landmarks that have passed the test of time gracefully. Clinking your wine glasses amidst miles of vineyard is yet another experience that comes with drool-worthy seafood.

Besides, there are a plethora of romantic anecdotes waiting to occur! This piece lists everything you need to plan your Croatia honeymoon and make it an unforgettable vacation.

Best Time For Honeymoon In Croatia

May- June and September-October make the best time to plan a honeymoon in Croatia. During this time, there’s lesser tourist crowd and the weather is pleasant. The hotel tariffs are comparatively low, so you can get an upgraded stay in low budget.

June end to August is termed as the high season in Croatia. Many festivals like ULTRA Music Festival are organized in this time. If you both wish to be a part of an extravaganza, this too can be a great time for Croatia honeymoon.

Best Places To See On Your Croatia Honeymoon

Here’s a list of the most lovely and best places to honeymoon in Croatia. These will help you ignite that much-needed spark in your relationship.

One of Croatia’s most popular romantic destinations, Dubrovnik appeals with its stunning contrast of electric-blue sea, brick-red roofs, and ochre-hued fortified walls. Explore this Mediterranean city with your spouse, ambling hand in hand, walking past or stopping over for the Baroque and Gothic architectural marvels like St Blaise’s Church on your way. Or maybe just spend an evening with wine glasses in your hand along the seacoast of Dubrovnik Croatia, clinking as the sun sets!

Must Read: 12 Buzzing Croatia Festivals To Experience The Country’s Culture In 2018-19!

The fertile soil of Hvar has bestowed it with a booming agricultural. The crystal clear sea water and charming city’s landscape are sure to leave you two mesmerized. Olive groves, orchards, and vineyards dot the region affluently. For the times you want a secluded slip, Hvar has little-known paradisiacal beaches you’d never want to leave.

When listing Croatia honeymoon destinations, Split is a must-mention. This is one of Croatia’s largest cities, and it will greet you with plenty of activities such as kayaking and canoeing. A walk through the cobbled pavements of the Old Town will transport to a time as old as fourth century; Diocletian’s Palace will surely be a highlight of your Croatia honeymoon.

With its skyline dominated by St. Euphemia, Rovinj is a fishing town lying on the Istrian Peninsula west shore. The narrow stone pathways, brightly-colored local houses will urge you to keep going through without a map, and you’ll love it. These colorful buildings are indeed reminiscent to the Venetian streets. Save the late evening for pub-crawling, and you both will end up having a blast on your honeymoon in Croatia.

Zagreb’s Austro-Hungarian architecture is a total heartthrob. The buzzing clubbing and cafe scene of this place will have you tapping your feet and will uplift your spirit on your honeymoon in Croatia. People often tend to miss out on this destination majorly because of the fact it’s a less-known marvel. However, this is a plus point for honeymooners as they get a break from maddening tourist crowd of the cities.

Top Attractions: Church of St. Mark’s, Zagreb Cathedral and Treasury, and The Museum of Mimara

Top Things To Do On Your Croatian Honeymoon

Here’s a list of the must-have experiences that can make your honeymoon in Croatia one of its kind and absolutely memorable. Take a look!

What’s a European honeymoon without wine? Peljesac Peninsular in Dalmatia Coast’s Southern end will quench your thirst for finest of wines, coupled with lip smacking seafood. We suggest, on your Croatia honeymoon, you tour the vineyards of this region. If you both want to go exploring on your own, pick the wine cellars map from Ston Tourist Office, and let the fun begin!

Croatia’s been mesmerizing the world with its stunning landscapes already. And a tour through the national parks of Croatia will open doors to a wonderland while you’re on your honeymoon in Croatia. There are eight national parks in the country, including the UNESCO listed Plitvice Lakes National Park in central region, flaunting 16 terraced lakes. The lakes are adjoined by small waterfalls, further leading to limestone canyon.

Croatia’s beaches look like they’ve come straight out of dream. White sand shores, being kissed away by crystal-clear azure sea waves weave a panorama that’s beyond beauteous. To add more fun to your beach hopping, we suggest island hopping, on your private catamaran. Fret not about the sailing skills, a qualified crew member will be onboard if you want for a safe sail!

HBO’s Game of Thrones has taken the world by storm. And when you’re on your Croatia honeymoon, a tour to top GOT locations must be on your itinerary. Dubrovnik’s forts and walls have been featured as King’s Landing, Trsteno Arboretum as Red Keep’s gardens and City of Qarth is located in St Dominic Monastery in Trogir.

Yes, you’ve read that right. Croatia is the place where you both get to hear the music sea waves create. The Sea Organ is a unique seaside installation in Zadar. The sea waves hitting the staircase on the shore create different harmonious tunes.

To give you a fair idea of the location, so you plan your itinerary accordingly, here’s the map of Croatia:

Further Read: DO NOT Leave For Europe Without Packing These 8 Things

With this coming to an end, you’re all ready and inspired for a sizzling honeymoon in Croatia. If you’re still confused and want a hassle-free arrangement of your honeymoon, you can plan a customizable Europe honeymoon holiday with TravelTriangle that’d suit both your budget and interests.

Q. Is Croatia a good place for a honeymoon?

A. Croatia boasts of idyllic islands with breath-taking views and historic cities with a wealth of exotic and supremely luxurious hotels, resorts and pleasant weather makes it an ideal honeymoon destination.

Q. Where are the nicest beaches in Croatia?

Q. Which are the most romantic places to visit in Croatia?

A. Here are a few places in Croatia which is a must-visit on your romantic getaway with your partner:
1. Rovinj
2. Motovun
3. Lošinj
4. Korčula
5. Dubrovnik

Q. When is the best time to visit Croatia for a honeymoon?

A. May- June, and September-October is the best time to enjoy a romantic weather and some of the most breathtaking scenery of this beautiful island. As its the shoulder season, you can also get huge discounts on hotels and a lesser crowd.

Q. What is Croatia famous for?

A. Croatia is renowned for having the highest number of UNESCO Intangible Goods of any European country. Zlatni, a beautiful rat beach in Croatia is known for changing in shape and color depending on the wind. Croatia is also home to the world’s biggest truffle.

Q. What’s the best area to stay in Croatia for a honeymoon?

A. Some of the most amazing places to stay in Croatia for a blissful and romantic getaway are:
1. Dubrovnik
2. Plitvice Lakes
3. Istria
4. Zagreb
5. Hvar Town, island of Hvar

Q. Which is the best place to enjoy the nightlife in Croatia?

Q. Does it snow in Croatia?

A. Yes. Croatia enjoys a continental climate and a pretty cold winter with heavy snow.

Port Blair Honeymoon Guide 2020: For An Experience As Unique As Your Love Story!

23 Tourist Places In Odisha To Visit In 2020 For A Fun Vacation!