39 Game Of Thrones Locations That Are Equally Spectacular And Dreamy In Real Life! 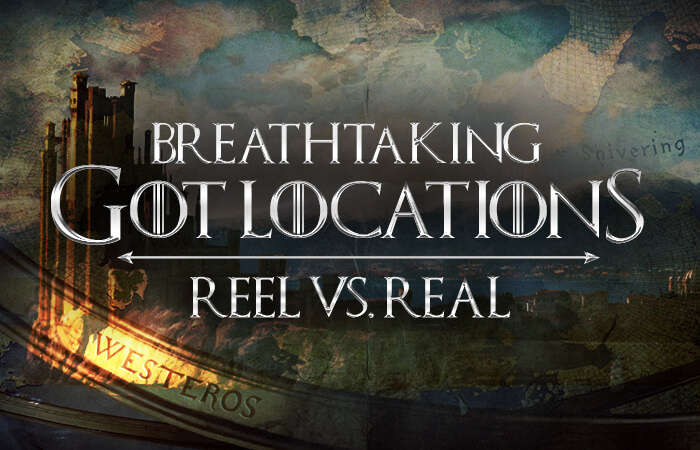 Summer comes, summer goes but WINTER stays forever! In our mind and soul.  April 17 will be here in no time marking the arrival of the television carnival of the year, Game of Thrones Season 8!

It all started with Tollymore Forest Park in County Down when members of night watch first encountered White Walkers in the dark woods. 7 seasons down, Game Of Thrones has evolved into an epic plot that is known to keep its fans at the edge of their seats.

The RR Martin’s class act has featured the best of northern Europe, the Mediterranean Sea, and North Africa (Morocco). Duly complementing the gripping plot of the TV series, the exotic locations are serene, inviting, and breathtaking.

But were you, at any point of time, compelled to look for the exciting Game of Thrones locations that the makers have been featuring over the past 7 years? I was! And to my utter surprise, I found these places way too fascinating. These breathtaking locations from across Iceland, Scotland, Northern Ireland, Croatia, Spain, Malta, and Morocco look straight out of picture-postcard. You must take a good look at ’em. Right away!!

Starting with the sweeping landscapes of the Westeros epitomized by Arya Stark walking with the Hound.

2. North of the Wall – Svínafellsjökull

The most thrilling location in the history of television ever! Who can forget the North of the Wall that Jon Snow and Wildlings scaled after surviving the fierce storm?

To visit these places one need not be a fellow night’s watch!

When Wildlings held Jon Snow captive! This one looks like an entirely different location.

Out of all the rocks and snow, the Wildling camps are way too fascinating than what it meets the eye.

Suggested Read: 10 Best Places To Visit In Iceland That Will Leave You Drooling All Over!

Frostfangs – the place where the rugged mountains enveloped in white left you awestruck!

Who would forget this place where Wildlings and Jon had a candid conversation walking across the never ending landscape.

5. Beyond the Wall area – Hverfjall Volcano

When Ned left for the North with Sansa & Arya to become the king’s hand!

When Mag- the mighty entered the Castle Black and knocked off everything that came his way!

The best of the castles of Ireland!

The horses at the entrance were created but landscapes were for real.

When sister Yara carried brother Theon on the horseback

The largest town on Iron Islands, Lordsport also served as the seat of House Greyjoy.

Where Cersei was held captive! It was from here she started the walk of shame.

Greece – Featuring the lone yet one of the most amazing locations!

The famous prison with the breathtaking backdrop where Imp was held captive!

The capital city and the largest city of the Seven Kingdoms towards the east coast of Westeros. The Iron Throne and The Red Keep belong here!

The primary fortress of King’s Landing is currently the seat of Cersei Lannister. The fort overlooks Blackwater Bay and the Narrow Sea.

One of the free, powerful, and rich cities located to the east of Westeros. Titan of Braavos guards the port.

25. The City of Meereen – Fortress of Klis

When the whole city lined up to greet the mother of the dragons!

Remember, the huge army of Khaleesi crossing the vast barren stretch of land!

The cathedral where High Sparrow took on Jamie Lannister.

Malta – The best of GOT, all in one place

Though it looks completely different, Azure Window was the place where Khal Drogo & Khaleesi got married! Compare the reel and real.

Must Read: 20 Fictional Places That You Can Visit In Real Life

And with the execution of Ned, GOT fans realized that choosing a favorite character in this TV series would leave them in deep agony! :(

Morocco – Moroccan desert & Mediterranean made the best of the locations featured

Where Khaleesi meets the legion of an unsullied army, purchases them, and sets them free!

Here the legend of Khaleesi grew!

Aren’t you intrigued to take another virtual of the exciting GOT locations? There’s still a few months time before season 7 gets underway! OK, repeat mode on, time to start with season 1. And when you do so, don’t forget to keep this blog opened in a separate tab.

Further Read: 50 Weird Yet Fascinating Places All Across the World