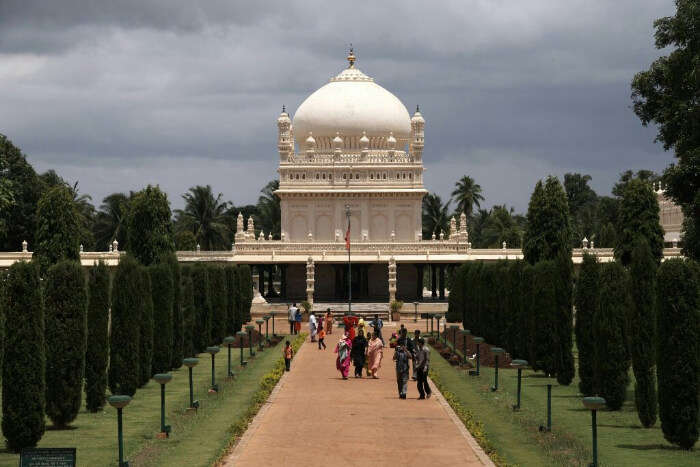 Established in the year 1784, Daria Daulat Bagh, the Summer Palace of Tipu Sultan was given the status of the National Monument in 1959. It’s a castle situated in the city of Srirangapatnam, near Mysore in Southern India. Daria Daulat Bagh arrays the magnificent architectural style of Indo-Saracenic amidst beautiful frescos and ostentatious structure. One must plan a visit to this grand structure and plunge into the illustrious epoch of Tipu Sultan.

Daria Daulat Bagh history dates back to the 16th century. The Bagh is located outside the fort, on an island. It was named ‘Daria Daulat Bagh’ which literally mean “the wealth of the sea”. The inception of this garden was commissioned by Haider Ali, however, it’s establishment was completed by Tipu Sultan, popularly known as the ‘Tiger of Mysore’.

The palace exhibits the Indo-Saracenic architecture and was the favourite retreat of Sultan. The paintings in the palace depict the war scenes, the British and the French officers, the Sultan, Kings and others. Later, the palace was converted into museums that display war weapons, paintings and coins of Tipu’s era. The famous oil painting ‘Storming of Srirangapattana’ by Sir Robert Ker Porter made in 1800, exhibiting the final fall of Sringapatana is one of the main features of Daria Daulat Bagh.

Why One Visit Daria Daulat Bagh?

Must Read: 20 Things To Do In Mysore Perfect For Experiencing The City In 2021

Image Source
Located on the road leading to Sangam, Nimishamba temple was built during the time of Wodeyar Rule. The presiding deity of the temple, Sri Nimishamba is believed to be the incarnation of Goddess Parvati. The temple also comprises the idols of Ganesha, Hanuman and Saraswati. The temple has many beautiful carvings on its tower esp. the ‘Sri Chakra’ inscribed by Muktharaja. The temple organises special poojas on every Poornima and Nimishamba Jayanti.

Suggested Read: 12 Gorgeous Waterfalls Near Mysore For Your Mini Break

Suggested Read: 15 Best Hotels In Mysore That Offer A Royalty-Like Stay For Every Type Of Traveler

Image Source
Popularly known as the Gumbaz at Srirangapatna, is a mausoleum, holding graves of Tipu Sultan, his father Hyder Ali, and his mother Fakr-Un-Nisa. The Mausoleum is at the centre of a panoramic garden that was constructed by Tipu Sultan to house the graves of his parents. Later, the British allowed the burial of Sultan at this place after his death in 1799.

Suggested Read: 8 Most Romantic Restaurants In Mysore That Will Make Your Dream Date Extra Special!

Image Source
It is the confluence of three rivers where other branches of the River Cauvery, that’s, Kabini River, Hemavati River, and River Cauvery reunite. Sangam is frequently visited by tourists, pilgrims and picnickers. River Cauvery flows into the Mettur Dam in Tamil Nadu from this point.

Suggested Read: Shopping In Mysore: Top 10 Things To Buy And Where To Shop For Them In 2021

Srirangapatnam Fort, also known as Tipu Sultan’s Fort was established by the Feudal Lord, Kempe Gowda in the year 1537. The palace comprises of four main entrances called as Delhi, Bangalore, Mysore, water and elephant gates. This fort is impenetrable due to its double wall defence system.

Daria Daulat Bagh welcomes thousands of visitors throughout the year. The palace can be visited from 9 am to 5 pm and no entry fee is charged here.

Further Read: These Best Places To Visit In Mysore Are Totally Worth Your Weekend In 2021

With numerous tourist attractions, Mysore invites wanderers from all across the world. One must plan a trip to Mysore to admire the divinity of this beautiful city by visiting numerous places such as Mysore Palace, Daria Daulat Bagh, Mysore Sand Sculpture Museum and Lalitha Mahal.

Sakshi Awasthi, an ardent traveler by heart is a Research Scholar from the University of Delhi. Unveiling the untold story of historical sites and encountering the impeccable beauty of nature, turned her to be a Travel Blogger. Currently, working as a Senior Content Writer with TravelTriangle.