The Atlantis Of India: This Goan Village Rises From The Water Only Once Every Year! 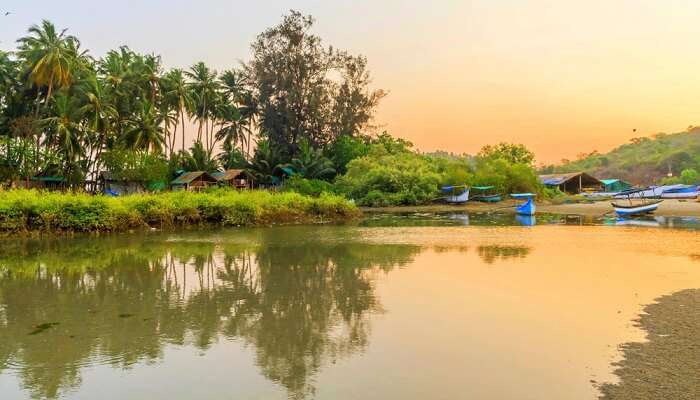 Little does the world know that there is a disappearing village in Goa that emerges from the water only in the month of May every year and then goes under for the remaining 11 months. But when it does magically appear, it’s a moment of pure joy for its original residents who come together to celebrate their home. And while this may sound exciting and unique to us all, it’s rather solemn for the residents of Curdi who have to wait an entire year to see their village and their homes all over again!

Intrigued to find out how this happens? Well, scroll down to know the story of Curdi, a Goan village lost in time.

The Story Of Curdi – The Disappearing Village In Goa

The hip and happening town of Goa was home to the charming village of Curdi many years ago. Nestled between two hills in the Western Ghats, this was once a thriving village in south-eastern Goa with the Salaulim river meandering through it and providing the residents with their daily supply of water.

The residents of Curdi had a simple life. They would wake up to the sound of the gurgling Salaulim, go to work in their paddy fields, and come home to their families for a hearty supper that came from their fertile lands. Over 3,000 people from various religions like Christianity, Hinduism, and Islam once lived harmoniously in this land. The village even had a number of Hindu temples, a chapel, and a mosque to support what could be one of the biggest examples of secularism.

Life went on this way until 1961 when Goa was liberated from the Portuguese. The village’s strategic position caught the eyes of Dayanand Bandodkar, Goa’s first Chief Minister. He decided to build here a dam that would benefit people all across south Goa, but would leave Curdi in ruins!

Must Read: 32 Hidden Places In Goa: Explore The Unexplored Side Of Goa

“Your sacrifice will be for the greater good,” was what Bandodkar told the villages when he brought the proposal to submerge Curdi in order to provide water to Goa’s growing population. Built over Salaulim, the purpose of the reservoir was to provide almost 400 million liters of water for drinking, irrigation, and industrial purposes, a promise it only half fulfilled.

In 1986, heavy monsoons overflowed the newly made dam called Salaulim Irrigation Project, and the village was forced to hurriedly pack up and leave behind their livelihoods and their memories. Over 634 families were displaced from their land, compelled to abandon their homes due to the rising water levels and flee to the nearby villages of Vaddem and Valkinim where they were compensated with agricultural and residential land.

“I faintly remember my parents hurriedly putting everything in a pick-up truck. I was also packed up in the truck, along with my brother and grandmother. My parents followed us on their moped,” 75-year-old Gajanan Kurdikar told BBC. He was only 10 when he and his family had to leave their ancestral home.

The hard part is, that “greater good” never happened! The water from the dam never reached the former inhabitants of Curdi that now resided in the nearby villages.

“The tap system did not come through to all villages of south Goa as promised, so we do not get our drinking water from the dam,” Gajanan adds. These displaced families were left with no other option but to rely on government tankers during the dry months of April and May for their water supply.

Suggested Read: 14 Reasons Why A Trip To Goa In Monsoons Will Be Your Best Trip In 2021

Nature, however, does grant one month to the residents of Curdi to celebrate their history and their motherland!

In the month of May every year, the water recedes from over this area and reveals what is left of this once happy village. All one can see here now is cracked earth, stumps of trees, eroded remains of houses and religious structures, broken household items, ruined water canals, and large tracts of barren ground mingled with water bodies.

Every May, the residents of this little hamlet leave their misfortunes behind and gather to celebrate homecoming. While the Christian community assembles for an annual Chapel feast, the Hindus distribute food in a merry feast inside a temple.

As the village is now starting to catch the attention of the world, many historians, film-makers, and academicians are coming forward to give this land its due recognition and tell its story to the world, immortalizing Curdi at last!

In fact, Curdi is all set to be featured in a book called the ‘Life in Goan villages’, all thanks to Venisha Fernandes, an Assistant Professor of Sociology.

Further Read: There’s A Glowing Forest Near Goa That You Missed Because You Were Partying Too Hard!

So that’s how every year in May this disappearing village in Goa magically resurfaces, calling its residents to gather to relive their memories and celebrate their lost home with a merry feast and festival! And while young wanderers mostly travel to Goa to experience its hippie vibes, gorgeous beaches, and nightlife, there are hidden places like these that are starting to gain attention! So, when are you going to visit Curdi, India’s very own Atlantis?

Cycle Safari In Manas National Park: Assam Launches An Adventurous Way To Get Closer To Nature

12 Affordable Things To Do In Goa With Kids For Your Family Adventure In 2022!

Explore Goa In March By Visiting These 15 Breathtaking Places In 2022!