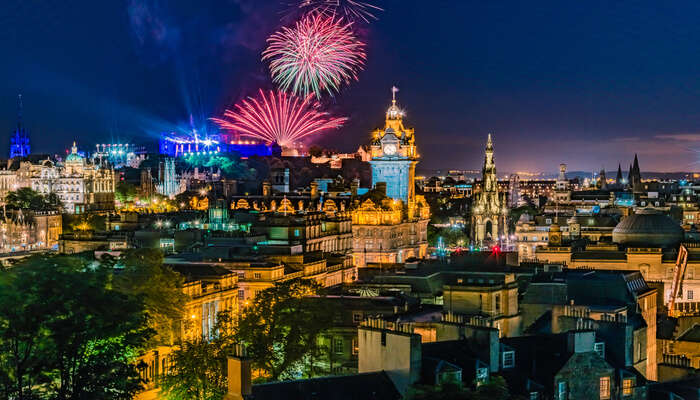 England is not only famous for its fabulous tourist attractions but also equally popular for its vibrant culture and ethos. Such vibrancy is best depicted in its many rich traditions as reflected through the array of festivals in England. From religious to harvest and musical to heritage, England cheers every kind of festival with the comprehensive pomp and show. They are so appealing that most travellers in England develop an urge to participate and celebrate the festivals with ample fun and excitement.

The popular festivals celebrated in England truly reflect the culture and heritage of this region. They are widely popular and are celebrated with full glory. Make your trip to the English land a memorable affair without missing one during the time of your visit. The England festivals’ list provided below will help you plan your trip at the right time!

Diwali in Leicester remains the most famous and well-known religious festival in England, UK today. With amazing fireworks, street décor, music shows, carnivals, and dance performances amongst others; Leicester celebrates Diwali in the fullest of splendour for almost two weeks during Diwali. It is an outstanding and one of the biggest festival outside India. Esteem the sparkling lights, enjoy the peppy songs and dances and indulge with the tasty Indian delicacies.

Where: Leicester
When: During Diwali
Location: Lake District, England

Must Read: 10 Beautiful Places To Visit In Birmingham For A Joyous Holiday In England In 2021

Much famous as one of the famous festivals in England UK, the Jorvik Viking Festival is a grand celebration of the Viking heritage. This festival is one of its kind in the entire Europe where locals celebrate the arrival and conquest of England by the Viking army. From the conflict performances, guided walks to competitions and feasts; this week-long celebration has everything to enjoy for everyone. Besides locals, a good chunk of travellers as well join this festival to enjoy its festivity.

Also called the “Bonfire Night”, Guy Fawkes Day is celebrated all over the United Kingdom on 5th November every year. The British light bonfires, as well as fireworks everywhere in the country, mostly in their back gardens or streets, scintillates the whole country. These days, locals have also started lighting these at planned events in the public parks.

This festival is rejoiced to honour the situation where Catholic Guy Fawkes’ had failed to blow up the Protestant Houses of Parliament on the 5th of November in the year 1605.

Where: All across the United Kingdom
When: 5th November
Location: Yorkshire, Dales, England

The bright Sidmouth Folk Festival is a week-long festival that consists of folk music, dance, and song among other activities. It is conducted in the delightful East Devon regency resort of Sidmouth in the United Kingdom. Sidmouth Folk Festival is among the most popular festivals in the United Kingdom with more than 700 diverse events planned at the town’s venues as well as on the streets of the town.

Such events generally comprise of a wide variety like concerts, roots parties, master classes, and even dance displays to name a few. This festival showcases the best of the British traditions and celebrations to be experienced by the locals as well as tourists visiting this country.

Suggested Read: 7 Best Villas In London For An Ultimate Holiday In This Stunning England City

Boomtown is another thrilling celebration in the UK and is commonly known as the Boomtown Fair that is a core of the diverse and original music culture here. This exclusive fair provides vibrant performances, camaraderie, theatre, fantasy, and also escapism to the tourists as well as locals to feel the true spirit of the region. So don’t forget to attend this festival if you are planning to stay in Winchester, England in August.

Suggested Read: London In January 2021: A Handy Guide For The Most Extravagant Tour Of This City In England!

Another most popular music festival in England, Glastonbury Festival is believed to be the biggest name in music due to its huge Pyramid stage. The place confirms an electrifying line up every year with the artists such as Miley Cyrus, George Ezra, Killers and et al as popular performers. It remains one of the momentous annual musical festivals which witness a huge crowd of masses. Both locals and travellers enjoy it to the most.

Suggested Read: Gateshead Millennium Bridge: A Handy Guide To Know About This Charming Gem In England

Conducted in the isolated Lincolnshire woodland, the Lost Village festival matches the dreamlike surroundings and an exciting carnival atmosphere. Designed to feel like you have tripped into the last civilized garrison of a dystopian future, you will find the lakeside feasts and food halls hidden amongst the trees. The scenario there is bound to give you a unique experience which you had perhaps never had earlier.

Suggested Read: A Tour Around The Windsor Castle In England Will Show You How To Live Life Queen Size!

It is unique even to remember by travellers. This eccentric festival can be a fun long weekend plan for you. Going over and above your usual drink, camp, and dance combination, this festival in England promises a time full of exciting activities for unlimited fun and entertainment you would love to indulge yourself in.

Shambhala is a favourite among eco-minded celebrators for its use of sustainable power. On top of their planet-friendly creativities, however, there are 12 stages of music presenting more than 200 musicians across the weekend, along with circus, comedy, cabaret, poetry and an artfully assistant series of talks, debates, and inspirational speakers.
It remains highly intellectual practice during the festive season. It is attended by a large chunk of masses.

Where: Northamptonshire
When: 24th – 27th July

Enter a world of fun, fantasy, and amazing bands at Neverworld. The beauty of a festival in England, UK goes in on the decoration, creating a full immersive wonderland of mermaids, cabaret, circus, pirates, and sparkle wrestling. Their stages have formerly seen sets from the likes of Bastille, Craig David, and Mike Skinner, while the atmosphere activities bringing you to the drag shows, beach games, and forest raves amongst others.

All set to board on your journey to England? Make sure you visit the country during the festive season to witness its culture, beauty, and hospitality. Plan your trip around all these fun festivals in England to make the most of your holiday. Traveling to England will be more fun if you become a part of the culturally vibrant festivities.

What is the most famous festival in England?

Diwali in Leicester, Sidmouth Folk Festival, Shambhala, and Glastonbury Festival are some of the famous festivals in England.

How to attend festivals in England?

You can check out the corresponding celebration dates of festivals you want to attend. Stay in a convenient location and book your tickets accordingly to attend the celebrations without any hassle.

What is the biggest festival in England ever?

The biggest festival in England is the Greenfield Festival Glastonbury. It remains the largest festival since the 1970s.

What traditions are celebrated in England?

What is England famous for?

England is famous for David Beckham, Fish and Chips, Black Cabs, Oasis, Blur, the Beatles, Big Ben, Red Buses, London and Tea. Windsor Castle is an ancient royal residence still in use. England is also well-known for its educational institutes.

School Admission Drive 2018: Putting The Future Of The World In Classrooms Now

10 Classy Wedding Venues In Tanzania That Are Perfect For Your Big Day!