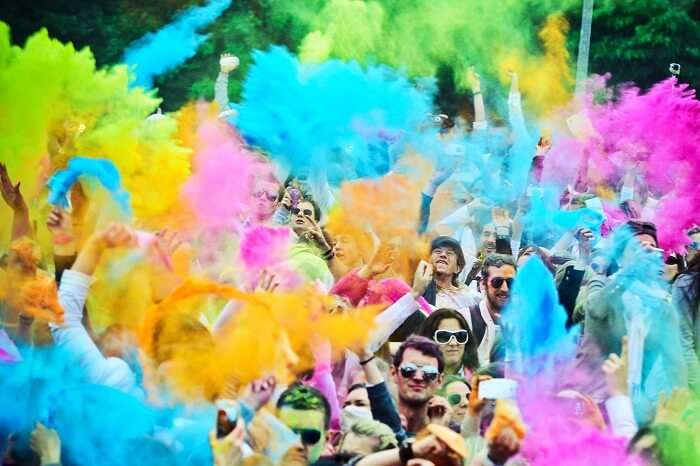 We all wait for the spring season in March after the cold and chilly winter. People in different parts of the world begin celebrating the most fun-packed festivals. The festivals in March around the world are colourful, high-spirited, and filled with a lot of fun. Festivals are the best way to bring together family, friends and a sigh of relief among stressful days. The greatness of a culture is best reflected in its festivals and that is why you must attend one to get to know a place better. Here is a list of vibrant and fascinating  festivals in March. It’s your chance to be a part of these festivals and witness the diversity of some of the most incredible nations. Do take this list along on your vacay and have a blast!

Top 11 Festivals In March In India

Who isn’t fond of festivals? Nothing brings people together as festivals do. Also, one cannot ignore their cultural significance. Here is the list of festivals in March 2020 in India you must be a part of. Take a look:

Holi is primarily a 2-day festival in India. Day 1 includes a huge bonfire at night. It is the next day that people play the festival of color. On the eve of Holi, there is a huge bonfire on the City Palace ground in Udaipur. This marks the burning and fading away of all the evils and negativities. The king of Mewar himself graces the occasion of the Dahan. This is one of the most popular Indian festivals in March 2020.

Key attractions on Holi in 2020: A rally accompanied by royally decorated elephants and horses and a regal band starting from Manek Chowk residence.

Must Read: The Epic Lathmar Holi In Mathura & Vrindavan: Up For It?

Lathmar Holi is celebrated in a unique style in Barsana and Nandgaon towns of Mathura. It is believed mythologically that Krishna once came to Barsana to tease Radha and was playfully beaten by her and her companions. Hence, Holi is celebrated here by playfully beating the men with bamboo sticks. This is one of the most unique Hindu festivals in March. Make sure to visit Mathura in March around the time of this festival to learn about its cultural significance.

Where: Barsana and Nandgaon, Mathura

Key attractions on Holi in 2020: The fun and exciting Holi battle where ladies beat up men with bamboo sticks and men in return throw colors and sing songs to tease them. Undoubtedly an exclusive version of Holi.

Holi is one of the most famous and immensely bright and vibrant festivals in March – celebrated to mark the triumph of Prince Prahlad over Holika. Holi eve is celebrated by huge bonfire known as Holika Dahan; the next day people celebrate with dry and wet colors, share sweets and happiness. In Shantiniketan, West Bengal, Holi is celebrated as Basanta Utsav or Dol Utsav. Here, the festival is celebrated with dry colors or gulal, traditional Bengali songs, and dance performances and carnivals.

Key attractions on Holi in 2020: Gulal and wet colors sprayed through water guns, jet sprays, and water-filled balloons. In Vrindavan, Holi is celebrated with flowers. In Basanta Utsav, one must not miss the morning procession- known as ‘Prabhat Feri’ where local girls and boys in traditional attire explore the streets, singing and dancing in joy.

This is one of its kind festivals in March 2020 India in Parmarth Niketan Ashram in Rishikesh. More than 500 yoga enthusiasts, trainers, and orators from 30 countries gather here to attend the yoga sessions and take part in talk shows and discussions. Make sure to visit Uttarakhand in March around the time of this festival. This excursion will prove to be a very relaxing experience.

Chapchar Kut is a harvest festival of bamboo shoots, celebrated to mark the drying up process and subsequent cultivation. This is one of the incredible cultural festivals in March in India, where the local people wear their traditional outfit, dance, and sing, play drums, gongs, and cymbals. Carnivals are also held along with stalls of local food, flower shows, and handicrafts.

Key attractions: The bamboo dance is the main attraction of the festival. In this dance, men tap the bamboo and open and close them in rhythmic beats as the women step in and out elegantly to the beats of bamboos.

Paripally Gajmela is one of the most incredible temple festivals in Kerala. The 10-day event witnesses parading of up to 50 caparisoned elephants. After that, a host of cultural programmes are organized on the premises of the temple. According to the belief of the locals, an offering made to the elephants satisfies the deity and grants all the wishes of the devotees. This is one of the fascinating festivals in March.

This is one of the stunning festivals of March in India, celebrated in Chettikulangara temple. The festival is devoted to Goddess Bhagavathy. The celebration also showcases a grand procession around the countryside, and offerings of rice and coconuts made to God, fireworks, music, dance and gala decorations. If you want to learn more about why this festival is celebrated and its cultural significance, head to Kerala and get a firsthand experience.

Suggested Read: Top 10 Summer Festivals In India You Must Plan Attending In 2020

This festival coincides with Holi, where elephants are ornamented with robes, jhools, and beautiful paintings. Grand processions of stunningly decorated elephants, camels, and horses are seen along with amazing musical performances. In the end, the best-decorated elephant is rewarded. Undoubtedly, this is one of the most gorgeous festivals in March in Rajasthan.

Key attractions: Elephant polo, Elephant race, and the tug-of-war between Elephant and men and women

Suggested Read: Top 39 Things To Do In Jaipur: Exploring The Pink City All Over Again In 2020

In Goa, Shimotsav is celebrated to mark the change of season. Goans bid farewell to winter and welcome the spring season. Around this festival, the whole state gets soaked in merriment with parades, local dances, folk music, flutes, and drum beats. This is one of the most popular festivals in March in 2020. If you want to learn more about the cultural and religious significance of this renowned festival, head to Goa in March. You will not regret this trip.

Suggested Read: 39 Famous Beaches In Goa That Will Make Your 2020 Vacay A Happy Trip

Thirunakkara Arattu is one of the most fascinating Indian festivals in the month of March, celebrated in Thirunakkara Mahadeva Temple in Kottayam. This is one of the most stunning 10-day long temple festivals of Kerala, where a gala rally of elephants is organized along with traditional drummers to take God for holy bath. Local people perform folk arts like Mayilattom (peacock dance), Velakali etc in the evening.

Suggested Read: 10 Best Things To Do In Nainital For An Amazing Holiday

Myoko is one of the most spectacular Indian festivals in March celebrated by the tribes of Ziro. This festival is organized by the Apatani Tribe to honor prosperity, purification, fertility, and sacrifice. Locals in their traditional attire sing and dance in merriment and cook delicious local food. This festival holds a lot of importance for the Indians. Make sure to participate in it, we promise you will have a fun time.

Suggested Read: 30 Most Famous Festivals Of India You Must Experience In 2020

Top 4 Festivals In March In The World

Festivals are a great way to explore and get to know about the culture of a country or a city and exciting for the young and the old alike. A welcome break from stress and another excuse for taking a trip, festivals are something you can’t miss! With the changing trend people have started exploring new destinations for the sole purpose of attending a particular festivity. So, here are some of the festivals celebrated in March that you can attend!

Established in 1936, the Grape Harvest Festival is one of the March festivals celebrated in Mendoza, Argentina and is a one of a kind of festival that has the wine growers and the wine makers coming together in a summer month in Argentina and is an annual event where over 20,000 revellers come together and there are parades, performances aand even fireworks and of course, great wine to taste! There is a great show where even actors and dancers participate.

One of the March festivals 2020 which will want you to plan that Norway vacation right away is the Narvik Winter Festival. If you are interested in a little bit of history then this festival has its origin in the Second World War. Now that might sound absurd but the festival is also dedicated to workers who built the railway line connecting Narvik and Kiruna during the nineteenth century. Now an international event, Narvik Winter Festival is now an international event wherein dance, threatrical performances, music and literary and art events are held.

Suggested Read: Kyoto Festivals: 6 Traditional Celebrations Which Reflects The History Of The City!

The list of March festivals 2020 can’t be complete without the mention of Australia’s largest free community festival. The Moomba festival reflects Australian tradition at its very best and happens on the iconic Yarra River. A cultural festival that has different kinds of food, sports, art, music and fun performances, Moomba Festival will make your Australian experience so much better. There are carnivals by the side of the river and fireworks which are a sight to witness!

Key attractions: Carnivals along the river and performances

Further Read:
15 Restaurants In Melbourne That Are A Hit With The Tourists

Now you know all about the festivals in March across India, pick your choices and plan accordingly. We are sure that you will have a unique experience altogether. If you’re feeling inspired, go ahead and plan an international trip. Haven’t you heard: the early bird catches the worm? Celebrate these  festivals in March and have a fun time.

Q. Which all festivals will be celebrated in March 2020?

A. Holi, International Yoga Festival, Indian Hip Hop Festival, and Elephant Festival in Jaipur are some of the events that will take place in March 2020.

A. No festival falls on 4th March 2020. However, Panchayati Raj Diwan will be celebrated on 5th March 2020 in Odisha. The thing with festivals of India is that their dates are not permanent are decided on the basis of positions of planets and stars.

A. Ugadi or Gudi Padwa will be celebrated on March 25, 2020. It is a new year’s day for people of Karnataka, Andhra Pradesh, and Telangana. The festival is celebrated by visiting temples, making colorful rangolis, and feasting.

Q. What are some of the major festivals in India?

A. There are many festivals celebrated in India. There are different religious communities in India and each religion has its own festivals. Some of the major festivals in India are Holi, Diwali, Eid, Guru Nanak Jayanti, Vaisakhi, and Christmas.

Q. What are the national festivals celebrated in India?

Camping In Shimla: How About Some Adventure Instilled Romance In 2020?

14 Vibrant Festivals In August In India: Save The Dates To Rejoice In 2020!

Trekking In Manali: A Tryst With The Best Of Himalayan Trails In 2020!

25 Stunning Places To Visit In Summer In Karnataka For A Relaxing Retreat In 2020!