10 Popular Festivals In Turkey That Make It An Irresistible Holiday Destination In 2021! 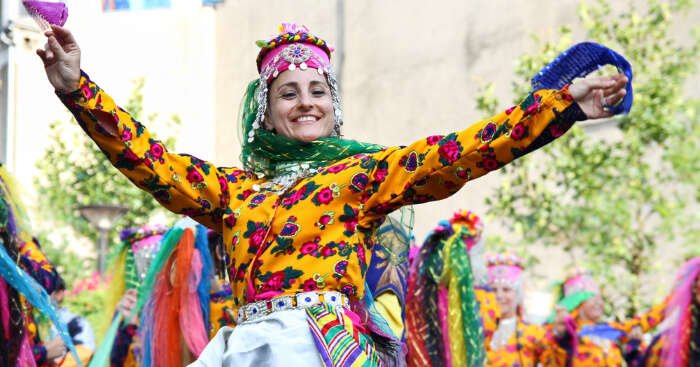 Turkey delivers more than just a fascinating culture & stunning landscape. It is basically considered as a home to a various holidays and festivals, several of which have been disclosed to help the country develop a more modern image. Festivals in Turkey including all kinds – music festivals, sport & outdoors events, nightlife events, cultural festivals, religious festivals & lifestyle events. Apart from local festivals celebrated in almost every city of the country, there are many other significant festivals that are popular internationally and are held in major city centers such as Ankara, Turki, Antalya and Zmir.

Istanbul is the main center of festivals. During the summer weeks, various music festivals are held in Istanbul. No matter which Turkey city you are planning to visit, schedule your trip around these 10 Turkey festivals and celebrations:

Izmir is well known for for being the host to the oldest festival activity in Turkey, during the multi-theme Izmir World Fair held during early September. The fair is organized by İZFAŞ, which is a depending corporation of Izmir Metropolitan Municipality. The social & musical events that take place simultaneously as the commercial fair had started away as an auxiliary activity to attract popular interest for the fair, but over time the festival became a school by itself. This is one of the most popular Turkey festivals 2021.

Must Read: 20 Mouth-Watering Turkish Delicacies That Will Give Anyone An Instant Foodgasm!

The most crucial religious festival is Ramadan (Ramazan in Turkish), the Muslim month of day abstention from drinking water, food, tobacco & having any sexual contact. Else, life carries on as normal during Ramadan, while most of the individuals are fasting from dawn to sunset. Some restaurants close for the timeframe or severely curtail their menus, others discreetly cover their salons behind window treatments, but at most of the firms you will be served with unexpectedly good grace. This is amongst the most popular festivals in Turkey.

Kadir Gecesi (The Eve of Power), when Mohammed received the Koran from Kristus, takes place between the 27th and 28th times of the month of Ramadan. Mosques – wonderfully illuminated for the complete month – are full all night, as its thought that prayers at this time have special value. On the last day of Ramadan, On Arife, people visit cemeteries and pay respect to their departed loved ones.

The 3rd day Şeker Bayramı (Sugar Holiday) directly follows Ramadan, celebrated by family reunions and the providing presents and candies to children, and abstaining from going to the restaurants. On the ever of Arife, the night after Kadir Gecesi, you will have to early reservations for tables at good restaurants. The 4thday Kurban Bayramı (Festival of the Sacrifice), in which the sacrificial offering of a sheep represents Abraham’s boy Ishmael (a Koranic version of the Testament story), is marked by the great slaughter of lamb and goats.

Throughout the Seker & Kurban festivals travelling becomes difficult so it is recommended to do your bookings well in advance for a seat on any long-distance train or plane. This is one of the most popular festivals in Turkey. Another important thing to keep in mind is that various shops, banking institutions, museums & government office buildings close during these times.

Cultural festivals are most fascinating in cities & resorts that contain the resources to attract internationally renowned acts. Nearly every town has some yearly bash, though several are of limited interest to outsiders. Folk-dance festivals offer an opportunity to see Turkey’s best dance troupes execute various repertoires of Turkish dances in traditional costumes. Well, what else do you want more when you travel to such places! This is amongst the popular Turkey festivals 2021.

Camel wrestling isn’t very quite as prevalent across Turkey as it used to be & is now confined mainly to the Aegean region of the nation, along the western and the west seacoast. Each January close to Ephesus, one of Turkey’s most well known archaeological sites, a camel wrestling event takes place. Mostly a couple of male camels, called as bulls, have the chance to battle over a lovely female camel, called as a cow. This is one of the most popular festivals in Turkey.

Suggested Read: 23 Reasons Why You Should NEVER VISIT Turkey

One of the most famous musical situations in Turkey’s Gumusluk area, the bulk of the festival starts on September 5, but some classical events are also held in July, August and September. Symphony orchestras are a great option to relax after a long day of sightseeing. A great gross annual highlight considering that the program features shows and new releases from Turkey & around the world. Make an effort to get your seats well in advance, because entry pass sell out really quickly. This festival is generally celebrated in & around Istiklal Caddesi or late March – mid April.

Last but not the least, Turkey’s biggest rock festival Rock’n Coke is obviously well worth a trip. It was recognized in 2003 and sponsored by Coca Coca-cola, Rock’n Coke is a massive festival that is held at the Hezarfen Airfield & has famous musicians from all over the world such as Travis, Limp Bizkit, Placebo, Muse, Iggy Pop, Linkin Park, Gogol Bordello and various others. If you are a music then this festival is a must-attend for you. Well, then what are you waiting for? Book your tickets now for Turkey and enjoy these various colorful festivals with your family & friends.

Another most interesting festival in Turkey is International Aspendos Opera and Ballet Festival which is conducted annually. The festival is celebrated at nearly 2000 years old Roman Aspendos Theatre, located outside of Antalya. Aspendos is one of the most preserved theatres in the world and is known for featuring some of the best international operas and ballet companies.

Another one of the most interesting festivals in Turkey is Cappadox. The festival is celebrated annually since 2015 amidst the beautiful landscape of Cappadocia. It is a festival of music, contemporary art, outdoor events, and gastronomy. The festival is known for featuring international artists including Mercan Dede, Rhye, Ilhan Ersahin, Acid Pauli, and many more! This place offers one of the best food festivals in Turkey.

As a country hosting billions of individuals, Turkey has to brighten up the times & nights of the beloved residents with various festivals & events. 1000+ festivals in Turkey are organized annually. So you have a thousand reasons to plan you next trip to Turkey.

What are the main holidays in Turkey?

What do people celebrate in Turkey?

Friday is known as Sunday in Turkey as it is the traditional Islamic weekly holiday.

What is Turkey famous for?

Turkey is known for its significant geographical location.

Is Friday a public holiday in Turkey?

Yes, Friday is a public holiday in Turkey.

Yes, Easter is celebrated in Turkey and for the best experience, one must visit any of the ancient church here.

9 Auspicious Festivals Of Monsoon To Welcome Rains With Gaeity & Celebrations

Bosphorus Cruise Istanbul: A Once In A Lifetime Experience