This Glass Hotel In Spain Has Taken The Concept Of ‘A Room With A View’ To A Whole New Level! 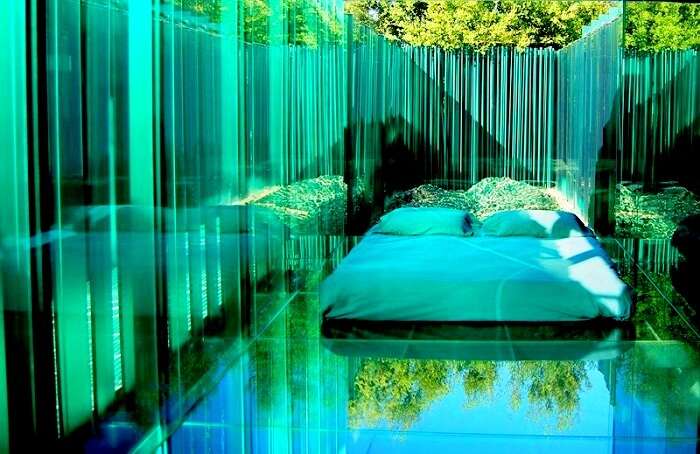 From tree houses to penthouses, ultra luxury resorts to swanky villas, and basic hostels to extravagant hotels, the iconic country of Spain leaves no stone unturned when it comes to offering the best accommodations to its tourists. Continuing its legacy, the country’s hotel sector recently received an extraordinary boost in the form of an utterly unique glass hotel in Spain, which is claimed to be the first of its kind.

Taking creativity to a whole new level, this hotel is now one of the best places to stay in Spain if you’re looking for a sumptuous and fancy holiday!

About The Glass Hotel In Spain

Located in the small town of Olot, Les Cols Pavellons, is the new best place to be, for travelers who are looking for an out of the world experience during their stay in Spain. Housing only 5 rooms, this property strives to deliver an experience that will leave its customers mesmerized. Here are certain highlights of the hotel that will take you to an imaginary world.

These rooms disconnect a person from the real world, and let him rest in the arms of nature. The tranquility, and serenity of the place allow people to find inner peace, and discover the true essence of natural beauty. The abundance of nature spread around the hotel makes up for dreamy landscapes that will leave you awestruck.

Other perks of staying at this spectacular accommodation are that travelers get to explore nearby attractions like Museu de la Garrotxa, and Garrotxa Volcanic Zone Natural Park. One can also visit the mesmerizing city of Barcelona which is just a 2-hour drive from this hotel.

Suggested Read: These Best Villas In Spain Are Better Than A 5 Star And More Exclusive Than A Suite

Here are certain pictures of the hotel that will leave you awestruck:

Suggested Read: Spain Is About To Become Second Most Popular Tourism Destination, Replacing US

Suggested Read: This New Island In Spain Is A Reason Enough To Update Your Travel Wishlist In 2022!

Suggested Read: 10 National Parks Of Spain That Will Take The Travelers To Another World

Suggested Read: 15 Best Beaches In Spain To Bask In The Tropical Sun In 2022

Further Read: 21 Captivating Spain Tourist Attractions That Will Make You Pack Your Bags In 2022

Mesmerized much? So if you are planning a trip to Spain, then look out for the attractive Spain tour packages at TravelTriangle which not only feature Spanish delights but also include stays at such stunning, and otherworldly accommodations.