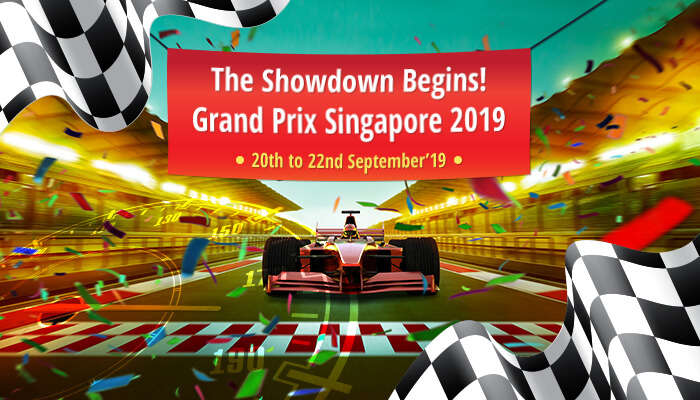 10 teams from different countries are all set to get your adrenaline high and with the fan cheering so loud all around, we aren’t surprised with the increasing number of people to this mega event every year! The Formula One ‘Grand Prix’ is for all those who hold a passion for Mc Larens, Ferraris and also for those who have never been to any event of the like because all the major fan zones, merchandises and flashy lights with a wide range of performances will get you prepped up for the next day!

Every season of this fun tournament brings some unexpected, and exciting results along with a few never-seen-before stunts and episodes of varying category. We bet that this Grand Prix in Singapore will have you all cross your fingers but there’s so much more to this event than just races! If you’re also one of the fans or just curious to know all about this year’s fast and furious carnival of the racing event, scroll down to know what awaits you here!

Beginning of a grand event like Grand Prix was around 1894 in France and even though the concept of a high-speed racing events were just being discovered then, with an average speed of 160 km/hr, the open roads and fewer safety options at the race venues resulted into deaths of both drivers as well as spectators. Flash forward to the current day, the Formula One Group is in charge of such races and major championships like the Formula One World Championship.

Top driver participants from various countries take part in this global race that has all the folks at the edge of their seats. Fascinating cars like McLaren, Ferraris, Mercedes Amg series, Renault RS 18 and Sauber C37 are only a few names from the 2018 Grand Prix race event.

Must Read: 9 Ethereal Festivals In Singapore That Will Force You To Ditch Yours

Highlights Of Grand Prix In Singapore

Certain things cannot be missed when you’re at this famous event of Grand Prix Season Singapore. So, while you decide how to explore around, here are a few things that you should look forward to at the fascinating Formula One race this year!

Some of the top artists that you might have only seen in pictures or videos are performing live at this year’s Singapore Grand Prix. These include Swedish House Mafia, Muse, Gwen Stefani, Red Hot Chilli Peppers, Hans Zimmer, Fatboy Slim and Toots and the Maytals. Artists are to perform at a specific region of this event from 20th September to 22nd September. You’ll also get to listen to DJ Lizzy, Ffion, Glen Wee, Gym and Swim, Raja Kumari, J.S. Ondari and many other famous artists here.

This is the best part for all those fans who are looking to take away more than just selfies here. The merchandise section at the Grand Prix in Singapore 2019 will have all the formula 1 related goodies like t-shirts, keychains, hats, bottle openers, pens, and other products. There are official stores available online if you wish to avoid the hassle of finding the store at the venue. These stores will provide you with authentic goods that are of good quality.

Contests like Thursday Pit Lane Experience and SGP Showstopper are exclusively organized for fans who wish to really make the best of it. You can enroll or participate for these contests through the official website of Singapore Grand Prix and lucky winners will get a ‘Pit Lane walk’ to see the race cars from up close for the first contest and in respect to the second one, you have to upload a video singing the mentioned songs on the website of Grand Prix of Singapore. What’s more, is that there are a driver’s autograph session and a super early bird ticket contest too!

Suggested Read: 3 Things To Do In Marymount With Friends On Your Singapore Getaway For A Great Time!

Due to the unpredictable weather in Singapore, visitors should wear light and comfy clothing. Be sure to check your ticket properly for the day, date and time of the event. If you’re visiting with children, make sure everyone has their own ticket properly issued and in case of a child under the age of 7 years, a signed indemnity agreement for admission purposes is also required at the entry. No outside food or beverages are allowed inside the venue except for clear water bottles that you can also refill at various water points inside. Singapore Grand Prix 2019 date, days and timings are stated as follows:

Singapore Grand Prix tickets along with their respective prices that’ll allow you can access to all 4 zones inside are also listed right here and you can surely book them through the official website!

Further Read: 9 Things To Do In Singapore In 9 Days To Ensure A Memorable 2021 Vacay!

If this has got your hopes up, we wouldn’t be surprised! The stunning entertainment line up only contributes more to the exclusive food options and suite options at the mega Grand Prix in Singapore. So, what is it that you’re waiting for? Make the best of your Singapore vacation this year by adding a dose of Formula One’s Fast and Furious race cars!

Q. How many laps is the Singapore Grand Prix?

Q. Why is Singapore Grand Prix at night?

A. Even though the primary reason for conducting the Singapore Grand Prix is that it can be broadcast in the UK land during by lunch hours, it also helps in keeping the tracks illuminated during the evening and only because of this reason, the overall experience for fans is that of an exhilarating one!

Q. How many laps does a f1 race have?

A. Usually, on an average a formula 1 race has 51 laps which comes to about 305 kilometers and only the Monaco Grand Prix has been an exception to this rule so far, with a total of 260.5 kilometers to cover as it is a street race and not a circuit one.