10 Awe-Inspiring Species Of Hanoi Wildlife You’d Be Delighted To Spot! 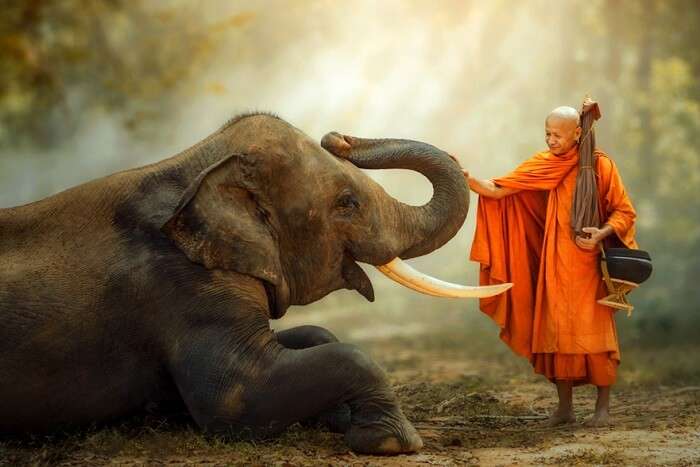 A trip to the most populous city in Vietnam, Hanoi may include a visit to the innumerable museums, ancient temples, and pagodas in every traveler’s list, but the most overlooked activity when in the city is of uncovering the biodiversity of the country. Although the vibrant food and coffee culture of Hanoi steals away one’s attention, the Hanoi wildlife is equally appealing. Surrounded by the tropical backdrop and marshy lands, Hanoi is home to a lot of endangered species that need extra attention in order to survive in the present ecosystem.

Here are a few of the Hanoi wildlife species that one needs to sight on their next trip to Vietnam. Which of these have you spotted already:

Chosen as the national animal of Vietnam, water buffaloes are a common sight in the country especially in the rural masses where agriculture plays an important role. The buffaloes are easy to care for and their work output is extremely important for the economy of the country. Right from its skin to the milk, Vietnamese water buffaloes are useful to human beings and thus sadly it falls under the endangered species list. Poaching and its application in several medical and beauty industries have led to the downfall of the species.

Must Read: Places To Visit In Da Nang: 10 Places To Put On Your Vietnamese Holiday Checklist

These petite nocturnal creatures are found in the marshy riverlands of eastern Vietnam. Found in the bamboo thicket areas of Hanoi, these pygmy species are venomous. They basically feed on natural vegetation but are most endangered currently. The war drove away most of the animals but what is making this species fade away at a faster pace is its poaching and hunting either for medical purposes or to simply own them as a pet. Pygmies are one of the must-see wildlife of Hanoi.

Ever been a fan of the character Yogi bear? Honey bears of Vietnam fit every description of the character except that they are a hundred times more adorable. With a distinctive mark on their chest, the bears are docile creatures other than when provoked. Coming from the Vietnamese region, the bears have stunted growth and off late have been found to be falling prey to various health issues. Because of which they have joined the endangered species list.

The Snub-nosed Monkeys are found in the mountain ranges that surround Hanoi. With excessive hair on their bodies, the snub-nosed monkeys are found in the colder regions of the country. Though not many can be spotted in today’s date, the monkeys can be viewed in the Hanoi zoo. With less than 300 members of the species alive in the world, the monkeys are in extreme danger of extinction. This species of Hanoi wildlife are known to be provincial and aggressive.

Exclusively found in Vietnam and a few other Southeast Asian countries, the water monitor lizards are known to have an aggressive grip over vertical surfaces through their natural habitat is around water borne lands. They are large creatures whose main defensive strike is through its long tail. They are good swimmers are have been reportedly seen even in the busiest cities of the country where there are canals and water streams running beneath. They are soon going to be an addition to the endangered species list if people do not stop poaching its skin to make fashion accessories.

Yet another reptile originated in the river beds and swampy lands is the mossy frog of Vietnam. As the name suggests, its physical appearance resembles a moss covered rock which makes its spotting quite laborious. Any of the Hanoi wildlife tours can take one across the Ba Vi National Park of Vietnam where one can try their luck in spotting this hideous reptile. It is not truly known whether it’s their difficult appearance in the open or simply a low count of the species makes them a member of the endangered species.

With many river beds and tropical growth, Hanoi does not fall short of migratory birds. The most common birds one can find on their top Hanoi nature and wildlife tours are the quail, duck and the cranes. What stands out amongst the bird species in the country is the great hornbill. With its colorful massive wings and distinctive beak, the hornbills reside on a higher elevation and rarely touches the earth. They are often heard making noises in the early morning and they feed on small animals and fruits.

Though most of them are endangered in the country, Indian elephants can be spotted in any of the Hanoi wildlife tours to the sanctuary. Most of the tusker elephants have been a victim of poaching allowing visitors to view only a few of their species in the national parks of Hanoi. There are no rides available here unlike other Southeast Asian countries as their numbers are diminishing with each passing day.

Suggested Read: New Year In Vietnam: 14 Experiences For A Lit Beginning Of 2022

Needless to say, the river shores of Hanoi provide a perfect environment for crocodile breeding. Unfortunately, most are bred for the sake of their skin. Crocodile skin accessories and shoes are a well-established business in the country and Hanoi streets bustling with the products are proof. A few places even use them as livestock which gives a whole lot of eerie feeling to visiting the species in the country.

Tigers have been topping the list of endangered species not only in the country but all over the world. Hunting, that started as an act of heroism in the medieval times has led us to this day. The Indochinese tigers are one of the most important wildlife of Hanoi that needs preserving. Less than 50 tigers are presently breathing according to the latest census in the country. Poaching them for skin, nails, hair or mere trade has led to the destruction of the species in Vietnam. The only chance of spotting a few tigers is in the Hanoi zoo.

Vietnam, with its rich biodiversity, has accommodated a lot of endemic species of wildlife in the country. The wondrous Hanoi wildlife surely deserves a peek via a visit into any of the nature reserves or sanctuaries that you venture into during your vacation in Vietnam. A short ride on the bamboo rafts along the Red River is sure to allow one a few sightings of the wildlife of Hanoi. Plan your Vietnam trip with TravelTriangle and experience all that this rich cultural city of Hanoi has to offer in terms of the diversity of nature.

Which is the best National Park to see the Hanoi Wildlife in Hanoi tours?

The Ba Vi National Park in Tan Linh Commune, Hanoi is one of the best places to witness Hanoi wildlife. It is just 60-km away from Hanoi City.

Which is the offbeat National Park to visit once in Hanoi wildlife tour?

Cuc Phuong National Park is the best offbeat park to visit once in your Hanoi wildlife tour in Vietnam. It is 13-km away from Hanoi City.

Is Hanoi a safe place to take a wildlife tour by a solo woman tourist?

Yes, it is advisable to come under an all-inclusive wildlife tour packages in Hanoi. This will include a local English-speaking guide too.

Which are the best months to visit Hanoi to see its wildlife attractions?

September to November bare the best months to visit Hanoi to see its wildlife attractions. These are pleasant seasons. You can see the wild animals in their natural habitat.

Which National Parks allows cycling for tourists to see its wildlife in their natural state?

Cat Ba National Park in Hanoi allows cycling for tourists to see its wildlife in their natural state. It is a few hundred kilometers from Hanoi City.

How many days are needed to see the Hanoi National Parks and wildlife sanctuaries?

You must visit Hanoi on a weeklong tour to see its wildlife in National Parks and wildlife sanctuaries.

Are there local tour operators in Hanoi to take tourists to wildlife places in and around Hanoi?

Yes, there are many day trip tour operators in Hanoi. They are the best team to take you to the interiors of the wildlife places on a guided day trip tour.

Where to visit in Hanoi to see most of the endangered species of Vietnam and Southeast Asia?

10 Eco Huts In Dhanaulti For A Stay Closer To Nature