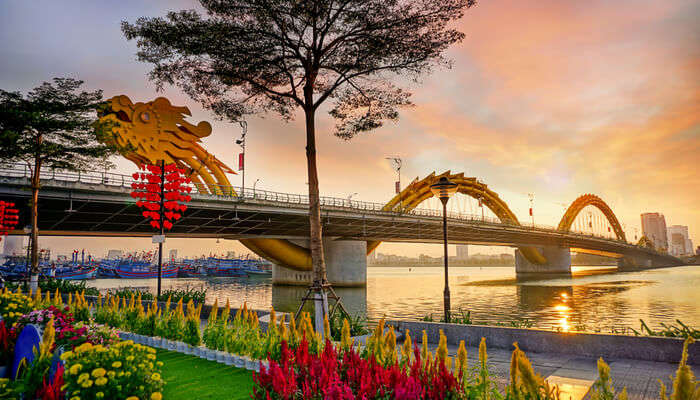 Da Nang is popular for many ancient Buddhist pagodas and markets around it. The city, in its earliest form, dates back to the end of French colonial rule Vietnam. During the Vietnam war, it was also one of the first cities where US military forces landed to fight against the native soldiers. There are a plethora of places to visit in Da Nang that carry the baggage of the past. Marked with rebellions, war, and blood, Da Nang has now risen above its past to become one of the major tourist centers of South Vietnam. Today this port town has a different story to tell.

It is a city with a vast history to tell and those who have the ear for it will find plenty to interest them in Da Nang. Here is a complete list of the places to visit in Da Nang. Take a look and decide accordingly where you want to go and your accommodation options:

Lying just 7 km outside of the city, My Khe is the beach that lies closest to the Da Nang. It is endowed with a long shoreline and is a favorite spot for surfing among tourists. The period from September to December is excellent for the sport, especially along the My Khe coast. At a distance of fewer than 25 miles lie the prominent beaches that surround the city. The natural coastline of the city stretches over 30 miles. It tops the list of places to go out in Da Nang.

Must Read: Shopping in Da Nang: 7 Best Places That’ll Compel You To Stop And Shop!

Lang Co is often referred to as the central coast of Vietnam. It comes a close second in our list of places to go out in Da Nang. It lies on the route from Da Nang to Hoi An. The best way to explore the losing-stretching and quiet beach is to take a private car from Da Nang. You can swim or surf in the waves or take a long walk on the white sands to refresh yourself. Along with forgotten war memorials and the pagodas, the factors that attract people more to the town is its proximity to the most famous beaches of Vietnam.

The old port of Hoi An dates back to the 15th century and has been a major trade port even during the French colonial periods of Vietnam. The mixing of the Asian cultures with the French has made it evolve into a heritage site of Vietnam. It also is home to some of the famous Buddhist pagodas of the country. Make sure to stop by here to get a glimpse of the history of Da Nang. Hoi An offers the perfect backdrop of Vietnamese culture and heritage. It is touted to be one of the best places to visit in Da Nang, Vietnam.

Suggested Read: 7 Top Rated Restaurants In Da Nang That Is A Must-Visit For All The Foodies!

The five element mountain of Da Nang, lying south of the city, is a collection of five hills of either marble or limestone. It is dedicated to the five elements, namely Kim, Thuy, Moc, Hoa and Tho in Vietnamese. It is just a 9 km drive away from the city and you have lots to explore in the caves, temples, and pagodas of these mountains. Da Nang lies just midway between the Southern city of Ho Chi Minh and the northern capital of Hanoi. It is one of the best places to go in Da Nang, Vietnam for young people.

The Son Tra National Park is a 35 min ride away from the city of Da Nang. It is known for the winding adventurous roads that lead up to it where people usually come to enjoy a bit of motorcycling. Many smaller beaches such as BaiBac, Bai Nam and Tien Sa beach are in the vicinity. It is entertaining to the visitors as the shores lines are always teeming with activities such as fishing, surfing, skiing, diving, and yacht rides etc.

Suggested Read: Explore These Gorgeous Beaches In Da Nang And This Scenic City For A Thrilling Holiday!

Built over the River Han that flows through Da Nang, it is one of the latest additions to the tourism of the city. It was opened to traffic in March of 2013 and supposedly in the shape of a leaping dragon, complete with a head. It’s light and Luanda show is really famous. With its rich past and stories, it is no surprise that the city of Da Nang attracts tourists from all over the world. With it, the Dragon bridge has become a symbol of the present in the midst of the past.

Once called the Tinh Hoi Pagoda, it is a true representation of nature and the Buddhist ideologies. It is full of really old and huge trees that lean above the buildings, beautifully maintained gardens and stone sculptures that exhibit the idea of Buddhism to its visitors. Located in central Vietnam, it used to be the main point of contact between the colonizers and the Vietnamese markets and is known to be an important landmark in the city.

Suggested Read: 8 Best Things To Do In Da Nang To Live This Bustling City To The Fullest

Lying in the border between Da Nang and the region next to it, the mountain pass is 21 km long and lies in the National Route 1A. It lies raised 496m above sea level and is called the Sea Clouds pass in English, for its beauty. It’s windy and winding roads are a popular motorcycling hub in Vietnam. Make sure to stop by here to get a glimpse of the beauty of Vietnam. You’ll be amazed by the serenity of this place and the surrounding areas.

Home to a collection of sculptures from the ancient Kingdom of Champa, the Cham museum lies next to the port of Hoi An. The arts in the museum date back even to the 7th century AD, with many of them being considered the masterpieces of the ancient culture. On a visit to Da Nang, this museum should be on your must-visit list, especially if you are a history buff. It is one of the most popular places to go out in Da Nang.

The Da Nang Cathedral was built in the early 20th century and is famous for its architectural peculiarities. It has a weathercock-topped steeply and it has been painted in pink. It was built by a French priest named Louis Vallet around 1923. You may or may not be a God-fearing person, but a trip to Da Nang Cathedral must feature in your itinerary. Stop by to take in the beauty and the ornate structure of this magnificent historical site.

Further Read: 10 Best Places For Shopping In Hue On Your Vietnam Tour

A vacation to Da Nang shouldn’t be less than 5 days since every single one the above-said places are a must visit when you are in the city. To understand Vietnamese culture and history, you must take into account these places to visit in Da Nang on your trip. Book your trip to Vietnam now and experience the history of this beautiful country in its full splendor. You’ll be blown away by everything this country offers and the hospitality of the locals.

Frequently Asked Questions About Places To Visit In Da Nang

Is Da Nang worth visiting?

Yes, Da Nang is a being a coastal city in Vietnam offers amazing travel experiences. It is a perfect destination for both nature lovers and history buffs.

What is Da Nang famous for?

Da Nang is known for its sand beaches and hills including Ba Na hills and hillside Hai Van Pass. The city is also popular among history buffs, for its French colonial vibe. The hidden caves that house Buddhist shrines in them are some other attractions in Da Nang.

What is the best time to visit Da Nang?

The best time to visit Da Nang is between the months of February and May. Da Nang has a tropical monsoon climate and these months are low monsoon season so rain would not interrupt your sightseeing.

What is there to do in Da Nang?

Some of the best things to do in Da Nang include: 1. Taking a cruise tour through Han River 2. Partying at the popular bars and nightclubs in Da Nang 3. Walking on the popular Dragon Bridge 4. Beach at My Khe Beach

How many days do you need in Vietnam?

A 4-day tour to Vietnam is enough to explore the most popular places in the country. And if you want to have a wholesome experience, a week-long vacation should do.