7 Haunted Places In Malaysia That Will Scare The Hell Out Of You! 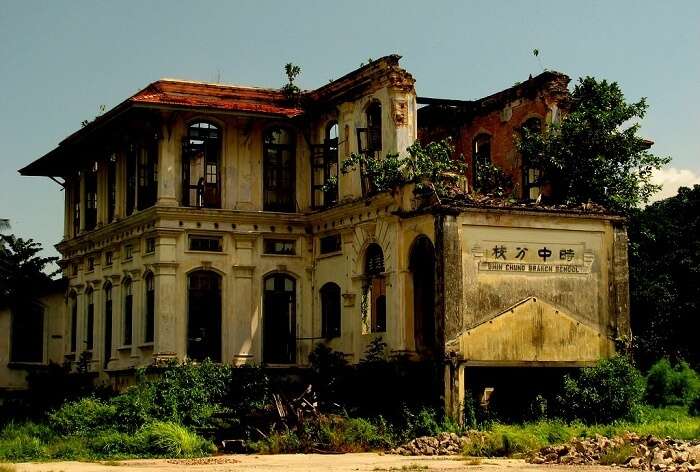 Whether you are a staunch believer of the paranormal or a skeptic resting on cold logic, haunted places have something to offer to everyone. While it may further strengthen your belief, whichever side of the coin you may be on, the most haunted places in Malaysia possess the capacity of giving you some spine-chilling moments like none other.

7 Most Haunted Places In Malaysia

And the sheer thrill of having experiencing such levels of paranormality, can only be felt at these haunted places in Malaysia that are only meant for the bravehearts.

The Karak Highway is one of the most notorious haunted places in Malaysia. Connecting Genting Highlands with Cameron Highlands, two of the most famous tourist destinations, the long and winding E8 Expressway has witnessed way too many accidents. Some unconfirmed sightings are of a lost young boy searching for his mother and of a yellow Volkswagen that continues indefinitely in line once you overtake it. Oh, and did we mention, the Volkswagen does not have a driver! Brr… Creepy!

Movie buffs will be able to connect this location with the 2015 Malaysian horror film by the same name. As the legend goes, a house help, in a fit of intense jealousy, killed all the family members residing in this villa. She buried their bodies all over the premises but surprisingly, even the investigators could not locate their remains. The spot came into focus once again in 2013 when 23 teenagers were reported to have gone missing at Villa Nabila!

Suggested Read: 21 Malaysia Islands You Must Visit In 2022 For Having The Best Vacation Ever

Jails have a history of unfulfilled wishes of freedom, much like the spirits that cannot transcend to the afterlife. Constructed during the British regime, the Pudu Jail confined over 2000 prisoners of war during the Second World War. Visitors experienced unnaturally hot and cold spots in various pockets of the prison. The execution chamber often burst into screams even though it was apparently empty. Despite the fact that it was demolished in 2009 and a commercial development took its place, strange activities are still reported occasionally.

Suggested Read: 10 Top 2022 Malaysian Restaurants That Will Treat Your Taste Buds Like None Other

This place resembles the infamous Winchester House. Once occupied by a wealthy family, the mansion stands abandoned for the past 50 years since a gruesome murder. A local witch doctor then settled into its deserted corridors and used the twisted past of the mansion to contact the unseen. The estate is said to be cursed, and locals refuse to even skirt the area as dusk sets. The place carries an overwhelming aura of foreboding misery punctuated by evil, inhuman sounds.

Mona Fandey, a famous witch doctor, was charged and proven guilty for the murder of the then-politician, Mazlan Idris. Assisted by her husband, the duo chopped up and skinned his body beyond recognition. At the gallows, Mona’s last words were “Saya tidak akan mati” which translates to “I will never die.” The reputation of Aeroplane Bungalow, Fendy’s residence, proves her parting words. It is a hotspot for supernatural occurrences and black magic residue left in the aftermath of her execution.

Suggested Read: 12 Malaysian Street Food Dishes That You Should Try In 2022

A posh hotel bang in the middle of Genting Highlands may seem like the last place to make it on this list of haunted places in Malaysia. However, the First World Hotel is quite an exception. Unexplained activities are credited to the spirits of those who committed suicide on losing everything at the resort’s casino. Guests in the pink of their health fall sick for no reason. Even the hotel authorities would not rent out some of the total 6118 rooms since they are said to be cursed. The 21st floor is kept vacant at all times, even when the hotel is at full capacity. Interestingly, it is also the same floor that the elevator skips during every round.

Suggested Read: 8 Serene Lakes In Malaysia Which Cannot Be Missed On Your Next Getaway!

The former school is tainted by the remains of the torture inflicted during the Second World War. Transformed into the military administrative building by the Japanese, the “school” became a slaughterhouse. Covered in wild and untamed overgrowth, the mere sight of the school is enough to give you goose flesh. The bereaved and abandoned state of the spot can induce shudders. Visitors have been overcome by inexplicable attacks of hysteria and have reported the sightings of Japanese soldiers’ apparitions.

While the daredevils may risk anything to go to the next level, it is always sensible not to mess with the paranormal world. However, if the spirit of adventure beckons you, these haunted places are a must-visit for you on your next trip in Malaysia.