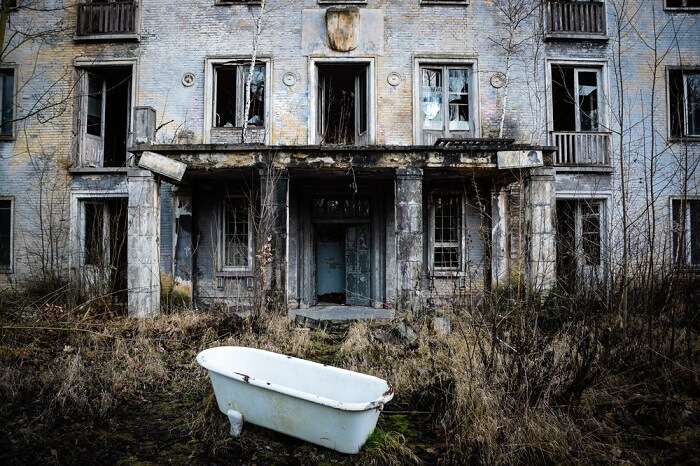 Munich, famously known for its annual Oktoberfest festival, is the home to a large number of buildings which are centuries old and has many museums within the city. The capital city of Bavaria also has a reputation of having few haunted places around which is given as the structures and buildings here are centuries old. These haunted places in Munich have their own unique stories of resident ghost, spirits and a haunted aura around them.

Here are some of the top 7 haunted spots near Munich in Bavaria which you must visit at your own risk as these places are bound to give you thrills.

Wolgsegg Castle is one of the most beautiful castles in the Bavarian region known for its splendid architecture. This place is known to be among the most haunted places in Munich. According to the legend, the owner of the castle murdered his wife when he found out she had an illicit relationship out of wedlock. Soon after, the husband and both his sons passed away.

Visitors have reported hearing strange sounds and noises coming from the caves near the castle. Also, many visitors have also reported a ‘White Woman’ walking the hallways of the castle. If you care travelling on a Eurail pass during October end, a visit to the Wolfsegg Castle can offer you a memorable Halloween experience.

Must Read: 10 Day Trips From Munich That Are Worth Taking Once In 2021!

The Black Forest region is known for its large number of castles, monasteries and ruins, world-famous spas, and the iconic cuckoo clock. But the wilderness of the region has a much more sinister legend associated with the Black Forest region, making it one of most haunted places in Munich According to local legends, devils, witches, and werewolves haunt the Black Forest. One of the most popular legends of the region speaks about a tall, disfigured man having many hands and bulging eye is referred to as der Grossman. Legend states that der Grossman makes naughty children confess their misdeeds to him and bad children are never to be seen again.

Another folklore associated with the region is about Die Gansemagd or the Goose Girl. According to this folklore, a princess was traveling with her maid through the region to a faraway kingdom to meet a prince. The maid forced the princess to switch places with her and killed Falada upon reaching their destination.

The real princess hangs the skull of Falada to the city’s main gate to get the attention of the King. The King punishes the maid by rolling her in a spiked barrel all around the city until she dies. Locals and visitors have reported hearing voices of a girl screaming in pain and some have also sighted a headless horse walking through the forest during the night.

The Wessobrunn Monastery is known to be the site one of the earliest and most famous works of German poetry, the Wessobrunn Prayer. The poetic work was stored for centuries in the library of the monastery, before being shifted to the Bavarian State Library.

But the Wessobrunn Monastery is also known for its haunted past and reports of paranormal activities, making it one of most haunted places in Munich. According to legend, in 12th Century, a sister hid in an underground passage of the monastery as she had broken her vows. She was accidentally locked inside and died of starvation. The legends state that the sister was never at peace and has been wandering the halls of the monastery. Sightings of a woman crying in the hallways have been reported by many who have visited this place.

Also known as Schweinfurt, this site was used to be Nazi hospital with a mess hall and a mental ward. This site was taken over by American soldiers in 1945 and returned to the German Government only in 2014.

But according to many US soldiers stationed at the site, the Nazis had never left the site, making it one of most haunted places in Munich. Many American soldiers based in Conn Barracks reported finding a Nazi soldier and a blood-covered nurse standing over their bed and conversing in German. The Conn Barracks is located in Schweinfurt, which is a 3-hour drive from Munich.

Situated in the outskirts of Munich, the Dachau Concentration Camp was the first Nazi concentration camp which was opened in 1933 with the intent to hold and imprison political prisoners. It is estimated that almost 32000 prisoners were killed and over 188000 prisoners were held captive in the camp till its liberation in 1945.

The sheer amount of death and suffering is ample fuel for ghost stories and make it one of the most important and must visit haunted places in Munich. No extraordinary or paranormal sightings have been reported in the Dachau Concentration Camp, by many people and visitors have reported that the photographs were taken inside and outside the buildings of this camp showcase mysterious black and odd red shapes when developed.

When members of Ghost Hunters International visited the Reichenstein Castle, during their investigations, many members believe to have had certain personal experiences, but their paranormal equipment did not indicate any signs of ghost, spirit or paranormal activities.

This former Premonstratensians monastery ranked top on the list of haunted places in Munich. It is believed, Maria Renata von Mossau, a Bavarian nun’s body was decapitated and cremated after she was forced to confess to several crimes including sorcery and satanism. Locals and visitors to the monastery have reported witnessing her spirit passing through the corridors of the Kloster Unterzell, the convent attended by Maria Renata von Mossau.

So these were the 7 most scary and nerve-wrenching haunted places in Munich. So if you are planning a vacation to Munich anytime soon, you know what places to visit to feel that eerie presence right around your neck.

Top 10 Haunted Places In Odisha And Their Paranormal Activities

Oktoberfest Germany 2021: Bottoms Up Your Mugs At The World’s Largest Beer Fest