12 Tourist Places In Munich You Should Not Miss 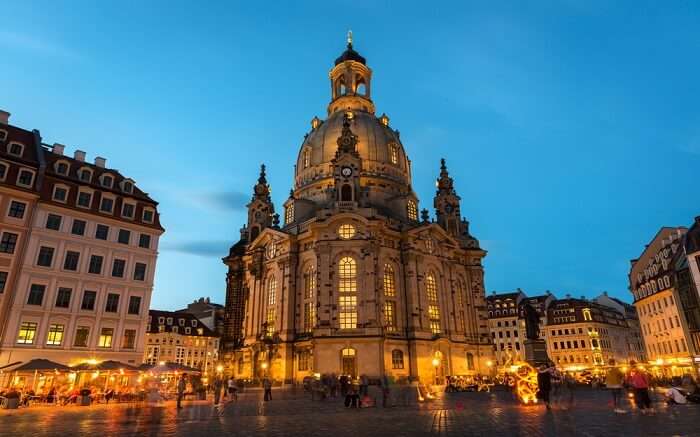 Munich is the third largest German City and the Capital Town of the Bavarian Region in Germany. Like any other part of Europe, Munich too has its share of architecture brilliance, preserve cultural sights and a tourist-friendly culture and infrastructure together. For example, the medieval town charm and appearance is visible on arrival here.

Yet, a walkthrough Munich is not just about admiring its old-world charm. The city has a lot of touristy flair for other reasons. A popular tourist gig here is the fiery, beer-boozing experience. The fact that Munich hosts the famous Oktoberfest at many famous beer pubs in the new town part of the city, is enough to say it all. Honestly, the city never sleeps.

The mentioned tourist places in Munich are full of life and many add flavors to your trip. To begin with, Munich is a versatile destination and has something of interest for casual visitors to special-interest sightseers. It is a perfect fitment of a travel itinerary in central-eastern Europe and to understand it better, it is important to know the city attraction and sights of Munich.

Marien Square has many architectural sights, a swarming market culture, churches, restaurants, and the world-famous pubs, and plenty to shop (surprisingly, buying stuff here is not very heavy on the pocket). The place is among the most visited tourist places in Munich and a photographer’s delight . To walk the length and breadth of the area, join a walking tour and get to know some interesting facts about Munich’s past.

The Town Hall has a glockenspiel: a stunning chiming clock constructed 100 years ago. People gather here to listen to the chimes playing live. The Glockenspiel rings and along with it, the life-size puppets built here dance to the old Bavarian instrument music. These 32 figures replay the past Bavarian event at the centre of the 18th-century-old New Town Hall boulevard. At the end of the show, a golden bird chirps from the top of the glockenspiel.

Viktualienmarkt is the best outdoor market in Munich. Filled with traditional items, local food, and colourful booths, it excites every shopaholic. The concept of the food market is appealing and traditional. The market was built in the beginning of the 19th century and it still has the same layout, at least in the first appearance. Locals come here to buy home décor items, flowers, spices, meats, cheese, fruits, vegetables, and other everyday items. For tourists, the friendly street layout offers a lot to eat at affordable prices and get a flavour of everything local in Munich.

4. The Hofbräuhaus am Platzl

It is an iconic place and one of the most famous beer halls in Munich. This place has a cool hangout ‘live’ vibrancy and tourists are as welcome as the locals here. There is an orchestra band performing live at the venue. The sight of people holding a glass of beer and dancing to the upbeat music is full of spirit.

The ambiance of Hofbrauhaus is typically German. A glass of 500 ml beer or a 1 litre beer mug along with the local specialities can be enjoyed at leisure. Munich people love their beer and it can be seen at the beer palace. The place has an international reputation and not without a reason.

Suggested Read: 5 Best Beaches Near Munich For A Tour Down The Mesmerizing Landscapes In 2019

Olympiapark was built for the 1972 Summer Olympic held in Munich. The same place now conducts concerts, sporting events, and holds festivals on the grounds. The swimming hall and ice-skating rink are for the public visits. Only on a cloudless day, one can enjoy the views of the Bavarian Alps surrounding the stadium. There is a self-guided audio tour available to walkthrough the history of the stadium.

Suggested Read: Munich In Summer: Your Personal Guide For A Soothing Germany Vacay In 2019

Just around the Olympic stadium, is the BMW Welt. This special BMW case is enclosed in a glass and steel, spiral-shaped showcase. BMW Welt is a car show space and people who love BMW auto-style must visit this place. Still wondering what to do here? Well, steer the BMW motorbike, enjoy the genius of auto-tech packed saloons, or simply invest time in the ‘lifestyle shop’. People traveling with kids have plenty to do here. There is a guided tour to help kids learn about mobility, car engineering, and join the junior workshops.

Must Read: 20 Vienna Hotels That Offer Much More Than Luxury And Comfort!

It is a landmark point of Munich and in-houses the city’s largest church called The Catholic Cathedral of Our Blessed Lady. The church can accommodate 20,000 people.

The church is built in the old brick architectural style-late Gothic-prevalent in the 15th century. Enjoy the beauty of the dome-style church decoration and then take a trip to the top of the twin towers attached to the cathedral. Tourists have an option to enjoy the beautiful view of Munich’s skyline. Take the steps to climb up to the tower-top and see the stunning Bavarian Alps encircling the city.

Suggested Read:
14 Best Romantic Places In Munich To Surprise Your Partner On Your Next Vacay In 2020!

Tourist’s looking for architectural exuberance, have an option to spend time in the Royal Palace of the Bavarian Monarchs. It cannot get better than this to enjoy the seamless beauty of European Royalty, notice the lavish life of the European Kings and walk through the elaborate interior decoration settings.

The palace was built in 1935, in-houses several courtyards and beautiful garden décor. The museum display is stunning with 130 rooms showcasing the antiquity of furniture, art, and ceramics. Spend time in the extensive past of European history, spanning the Renaissance, Baroque, Rococo, etc.

Suggested Read: 15 Best Places To Visit In Netherlands: The Perfect Mixture Of Art And Culture

Among the largest urban parks in the world, English Garden is filled with lush greenery and is a perfect place to explore at leisure. Do boating, walk the wooden paths, or take a relaxed tour of the traditional beer gardens. Rent a paddle boat, stroll along the wooded paths, visit one of its traditional beer gardens. Visit the famous urban surfing spot on the Munich’s Eisbach river.

It is recommendable if people are on a family tour or individuals who have interest in noting the architectural sights with a touch of history. It only makes a European tour more meaningful and worthy.

People who know the dark history of Nazi regime in Germany will instantly recognise the title- Dachau Concentration Camp. The original complex, consisting of the prisoner cells, baths, barracks, and the crematorium, has been preserved by the government. The best way to tour the sight is by opting for an audio-guide tour or appoint a walking tour guide. There is an elaborate arrangement to assist tourist’s walkthrough the history.

Suggested Read: This Man Clicks Pictures Of Clouds Over Mountain Tops & It Will Soothe Your Soul

If you’re on a family tour, then your kids will get hooked to this German Museum in Munich’s city center. It is a science and technology museum and one of the oldest and the largest museum of its kind in the world. It has an impressive collection of historical artifacts including the first electric dynamo, astronomy exhibitions, the first automobile, and more.

Jewish history or the dark Nazi past of Germany is something which the locals are not very proud of. To show their sentiment for a community, which was so brazenly thrashed by the Hitler-led Nazi army, Germans have preserved the Jewish belongings. Visit the Jewish Museum in Munich which was opened in 2007 to get a glimpse of the community history, life, and culture of Jews in Munich. A unique point of this exhibition is the showcase of the contemporary Jewish culture, adding a spring to life. The part of the Jewish complex here is a bunker-like synagogue.

Q. What is Munich famous for?

A. Apart from being the largest cities in Germany, Munich is famous all over the world because of its stunning medieval architecture. The city has maintained this old charm and blended it well with a modern touch. The city is also a highly sought after destination for beer lovers who flock to the city for OktoberFest every year. Also, cultural scene of Munich is often highly appreciated and the museums in the city is often considered the best in the country.

Q. How many days should I spend in Munich?

A. If you want to check out all the amazing sites of Munich 4 days is a decent amount of time to do it. However, you can also cover a lot of the city’s attractions in just a couple of days.

A. Munich is easily the safest city in Germany. The rate of violent crimes in the city is extremely low. You can freely travel the city at night and the friendly people will make you feel at home. However, it is always best to remain cautious because cases of petty theft are no news.

Q. What should I buy in Munich?

A. If you want to indulge in a little shopping experience in Munich, let us warn you because you’ll quickly get carried away. And we don’t blame you for there is no limit to the amazing things to pick from Munich markets. So, here are a few things that you ought to buy from Munich:
1. Heilemann Chocolates
2. Traditional Clothing and Accessories
3. Brotzeit (Marzipan Arrangement)
4. Lebkuchenherzen
5. Beer Stein from the Hofbräuhaus
6. Eilles Tea
7. German Cutting Boards and Kitchen Utilities

A. Being a major city in Germany there are a lot of people in Munich who are bilingual or can speak multiple languages. You can get by with English but it is important to carry a German phrase book with you when travelling the streets of the city. While Google translates works fine but you cannot rely entirely on internet service every corner of the city.

Q. How long is the train from Munich to Berlin?

A. There are around 19 trains that runs between Berlin and Munich. These trains are super fast and the average time that you’ll take to travel between the cities is around 7.5 hours.

Q. How do you get around in Munich?

A. Public transport is a great way to travel within the Minich city. The bus lines come to your rescue when you can’t find a U-Bahn or tram to reach the outskirts of Munich.

Try Canyoning In Slovenia On Your Next Trip To Europe!