7 Most Haunted Places In Shimla: Exploring The Eerie Side In 2022! 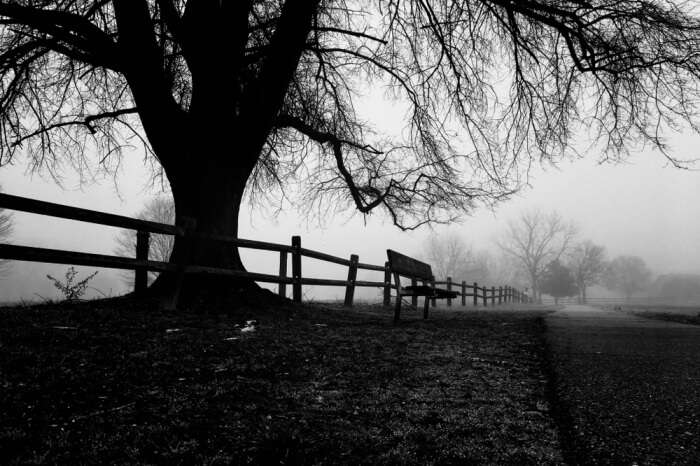 Ghost stories of Shimla Hills, the brilliant book by Minakshi Chaudhry is a compilation of city’s spookiest tales. The hair raising stories are more of folklore than thrilling incidents. But that doesn’t take away the creepiness from these tales of infamous haunted places in Shimla, which include a tunnel, a few haunted houses and many cemeteries. Along with lofty mountains, snowy peaks and pine-tree valleys come the ghost tales from roads, cemeteries, schools, colleges, tunnels and forests in Shimla. Are you ready to have an encounter with the supernatural forces?

7 Most Haunted Places In Shimla

Here are the top 7 most haunted places in Shimla that have maximum eerie stories to their credit. Even if you are brave enough, the uncanniness of the places will surely chill your spine!

Image Source
Clearly topping the list of most haunted places in Shimla is Tunnel 33. British engineer Captain Barog was assigned the responsibility for constructing this tunnel enroute Shimla Kalka Highway. He failed to complete the task assigned and was thus humiliated and penalised by the supervisors. Out of frustration and defame, Barog committed suicide.

Locals believe that spirit of Captain Barog still roams in the tunnel. Many people have also seen a woman walking along the rail track and disappearing gradually.

Must Read: 47 Most Haunted Places In India And Their Real Ghost Stories In 2022!

Image Source
Charleville Mansion is a century-old deserted castle, built in the British era. Located up the lush green hills of Shimla, it was once, home of a British officer Victor Bayley and his wife. Prior to them, an army officer resided in the mansion. The mere sight of the mansion is eerie, which makes it a definite entrant in our list of most haunted places in Shimla.

Both the families have reported uncanny incidents inside the house like sighting a British gentleman who slowly disappears, breaking and crashing things in the house. The activities are quite violent and disturbing.
Presently the mansion is owned by an Indian who has refurbished the entire house. Even today, locals report ghostly figures and shadows loitering inside the mansion. It is indeed one of the famous horror places in Shimla.

Suggested Read: 9 Scary Haunted Hotels In India That Will Give You Chills On Your 2022 Vacay

Image Source
Besides being a well-known convent school in Shimla, Jesus and Mary is popular for more than one eerie stories and incidents; even though most of them appear to be rumors.

There is one story around Friday, the 13, when a headless horseman appears and offers a rose to one of the girls. He takes along ones who agree and kills those who don’t. Another folklore talks of a fire in the CJM’s dormitory for orphans during British rule. The current play area is where the kids were buried. Of many ghost mentions, there is a young girl who keeps asking for her doll, and other young women who were taken by the horseman.

Adding fuel was a 2012 tragedy, when two IVth standard students were found dead near the school. The family and friends of the victims claimed that they committed suicide because of mental harassment and nuisance by their teachers. Some claim that the building is haunted by their souls too.

Suggested Read: 53 Best Places To Visit In Shimla To Relax And Unwind

Indira Gandhi Medical College is the largest medical set up in not only Shimla but whole of Himachal Pradesh. At the same time, it is also among the most haunted places in Shimla. Patients, their families, doctors and other staff have many times complained of mysterious activities in lifts, corridors and rooms.

Besides weird noises and strange voices, some have also reported being pushing from behind while taking the stairs. Common belief is that all these activities are due to the presence of spirits of the people who have died in the hospital. Even the forest road near the college is said to be spooked by the ghost of an orange seller. Though there is no reason for these spirits to be haunting the college, the premises are quite scary sometimes.

Suggested Read: Bhangarh Fort – The Most Haunted Place In India

5. House Of Dukhani: The Old Man In A Gown

Dukhani is a beautiful house at one of the hills of Shimla, said to be haunted by the ghost of an old man, wearing a gown. An old story from the British era tells that he shot himself in the Dukhani house in the same outfit. A spooky occurrence, narrated by Sir John Smith—one of the guests at Dukhani, when the place was owned by an old Britisher Bucky—is the most popular haunted tale of this house. During a short stay at Dukhani, Sir John Smith encountered the ghost of the old man in a gown, in the very same room where he had shot himself. Having said that this is one of the most rated horror places in Shimla.

Suggested Read: 5 Thrilling Water Sports In Shimla That Can Turn Your Boring 2022 Trip To An Exciting One!

Another one of the most famous haunted places in Shimla, Chudail Baudi lies between the way to Chotta Shimla from Shimla Highway. It is believed that your car speed will automatically reduce while you are crossing this point and the evil doesn’t end here. You will be stopped by an old woman and like movies, she will ask for a lift. The only difference is that whether you say yes or no, she will be sitting on the seat right beside you. A lot of accidents take place at this spot. Are you ready to meet with the old lady?

Suggested Read: Honeymoon In Shimla 2022: Guide To A Romantic Escape For Newlywed Couples

Kingal is a village in Shimla district and while driving on the road at night, locals have seen weird lights on it. Nobody has a valid reason for the lights but the locals believe that it is because of some supernatural occurrence. While you are in Shimla be cautious and don’t cross this road at night. If you want to have an encounter with the supernatural forces then you may visit it. These were some horror places in Shimla that you should visit while touring the beautiful land.

Further Read: 15 Haunted Places In Delhi That Will Give You Creeps

For all brave heart folks and adventure freaks, next time you visit shimla, check out the darker side of the summer capital. If these haunted places in Shimla have given you some serious chills and while exploring the city you come accross new places then do let us know in the comment section below!

Are tourist places open during Covid-19?

Slowly as things are getting back in order and we are learning to live with the new normal ways it is evident to say that tourist places are opening despite the pandemic is still on. However, it is advised to all that adhere to the given precautionary measures for Covid-19 and pay heed to the latest guidelines and orders of the government.

Are there any haunted places in Shimla?

Shimla has numerous ancient buildings from the colonial times that have given rise to many ghost stories.

Is the Charleville Mansion in Shimla haunted?

The Charleville Mansion in Shimla is a colonial building that is allegedly haunted but before believing any story confirm it from reliable sources.

Is it safe to visit Tunnel 33 in Barog?

Yes, it is perfectly safe to visit Tunnel 33 in Barog but take care of your belongings when visiting the Tunnel 33. Having said that, your safety is always in your hands.