17 Hidden Places Of 2020 In Delhi That Have Aged Gracefully Without Losing Their Charm! 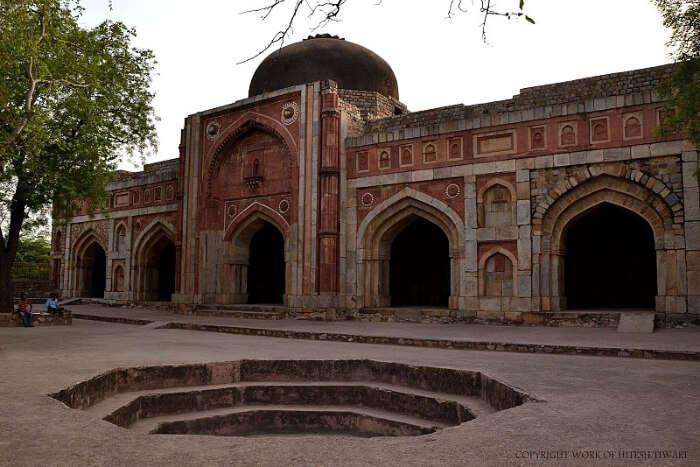 Be it a popular historical monument or the age-old ruins of the bygone era, there are many hidden gems in Delhi which are yet to be explored to their fullest potential. From artistic to architectural, from religious to haunted, and from historical to rooted deep in culture, these 15 hidden places in Delhi reflect the centuries-old charm that will compel you to walk through the glorious past of India’s capital, once again!

New Delhi, our capital doesn’t need any description when we talk about exploring places and tourists hoarding in the place. How about visiting the hidden and unexplored places to gain knowledge about the ancient culture, history, present days along with the future. Plan and venture out for a trip to Delhi as we give you a brief glimpse of some of the amazing secret places in Delhi.

Majnu ka Tila is included in one of the unexplored places in Delhi which is also known as Tibetan Colony. The Tibetan Colony provides shelter to all the refugees coming from Tibet who were the followers of the great Dalai Lama who was their spiritual leader. Majnu ka Tila is in North Delhi where you will get to see a bright display of the Tibetan culture which is shown in cafes, restaurants, guest houses, temples that the little Tibet comprises.

Must Read: Crippled By The Air Pollution In Delhi? Head To These Fun-Filled Places For A Smog-Free Weekend!

One of the unexplored places in Delhi which is a must visit is Hauz Khas Village which sets the spirit of partying for the new generation. Hauz Khas Village is a seamless display of medieval leftovers of Delhi which was constructed on the ruins of the city named Siri in the medieval times. You are going to witness some of the amazing cafes with exquisite ambience and bars in which you can hang out with your friends. You will be amazed to know that the place is crowded as it is located in South Delhi. Spend your weekends in one of the secret places in Delhi and chill.

Suggested Read: 6 Adventure Sports In Kochi That Will Let You Challenge Your Fears In 2020!

Literally translating into “seven bridges” in both the Hindi and Urdu origin, the Satpula Bridge is one of the most remarkable hidden places in Delhi. Located in the close proximity with Khirki Masjid, the Satpula Bridge held a lot of historical significance as it not only served as the water harvesting dam but was also a wall of defense during Sultan Muhammad Shah Tughlaq’s reign.

Suggested Read: 4 Enchanting Islands Near Phi Phi That Will Leave You Awe-Struck!

Christened with rhyming names, Jamali and Kamali are two hidden gems in Delhi of which one is a mosque and the other one is a tomb. It is believed that a renowned person named Shaikh Jamali Kamboh who was a highly regarded sufi saint was often associated with a common man of Kamali. Since both of them have been buried together side by side, the mosque and the tomb have also been named accordingly.

Suggested Read: Best New Year Parties In Delhi For Welcoming 2018 Like A Boss

Historically rich and rooted deep with the Mughal dynasty, the Tomb of Adham Khan dates back to 1561 and belongs to one of the famous generals of Emperor Akbar. Being one of the mystical hidden places in Delhi and of such great significance, it also happens to be protected by the very own Archaeological Survey of India.

Though the renowned Begumpur Masjid or the Begumpuri Masjid is the most vital of all the ancient monuments that belonged to the Tughlaq dynasty, very less people know of its historical significance and how it accommodated an entire village during the time of an invasion. Considered to be one of the most important features of Jahanpanah – a new city established by Muhammad bin Tughlaq back in 12th century, Begumpur Masjid is indeed one of the iconic hidden places in Delhi.

3. Bijay Mandal Fort: Gain Knowledge About The Victory Of Kings

Established in the 12th century, Bijay Mandal Fort is yet another striking feature of the newly built city of Jahanpanah by Muhammad bin Tughlaq. Literally translating into the victory pavilion of the whole city, Bijay Mandal is one of the best hidden places in Delhi where the Muhammad bin Tughlaq built his thousand-pillared palace which is popularly known as Hazar Sutun.

Though only the ruins remain at present, Tughlaqabad Fort still remains one of the most crucial of all hidden places in Delhi as it is eminent for being established by the founder of Tughlaq dynasty, the great Ghiyas-ud-din Tughlaq himself. Founded in the year of 1321, the fort was famous for its gigantic bastions which measured upto a height of upto 30 meters.

Built in between the late 15th and early 16th century, Jahaz Mahal is one of the best hidden places in Delhi which got its name due to an illusion that it created. Encircled by a reservoir, the shadow of the palace reflected an image of a sailing ship which is how the fort received its name.

Surprised much? So how many of these hidden places in Delhi have you heard of before? Let us know in the comments below! plan a Trip to Delhi without wasting a moment and make the best memories of your life.

Which is the most beautiful place in Delhi?

What are the places to visit near Delhi?

Where can I spend my evening in Delhi?

You can spend a fascinating evening in Delhi at spots like India Gate, Kingdom of Dreams, Hard Rock Café, Hauz Khas, and Connaught Place.

Where can I relax in Delhi?

There are a number of places in Delhi that are known for their peaceful ambiance, namely Lodhi Gardens, Hauz Khas Fort, Swaminarayan Akshardham, Humayun’s Tomb, Lotus Temple, and more.

Where can I spend a day in Delhi?

If you want to make the most of your time in a single day in this capital city, then you must indulge in at least one of these activities - exploring the food streets in Chandni Chowk, going for a walk at Lodhi Gardens, visit Nehru Planetarium, and going for Light and Sound show at Purana Quila.

How can I have fun in Delhi?

There are many ways to have fun in the city of Delhi. You can visit the Kamani Auditorium to enjoy the amazing performances, visit the National Museum, explore the city via HoHo bus, have a great time at Jantar Mantar, etc.

Where can I spend the weekend in Delhi?

Weekends can be quite fun in Delhi; you can spend time at the historical sites like India Gate, Qutub Minar,Red fort, and more or go shopping in Connaught Place, Chandni Chowk, Hauz Khas, etc.

Where can families go in Delhi?

There are a number of places in Delhi that families can enjoy visiting. Some of them are - Worlds of Wonder, Rail Museum, National Bal Bhavan, Kingdom of Dreams, Purana Quila, Qutub Minar, Lotus Temple, and many more.

Which is the famous seven arch bridge in Delhi?

Satpula bridge is one of the unexplored places in Delhi which is also a dam located just a kilometre distance from Khidki Masjid.

Which is the ancient water reservoir that is hidden in Delhi?