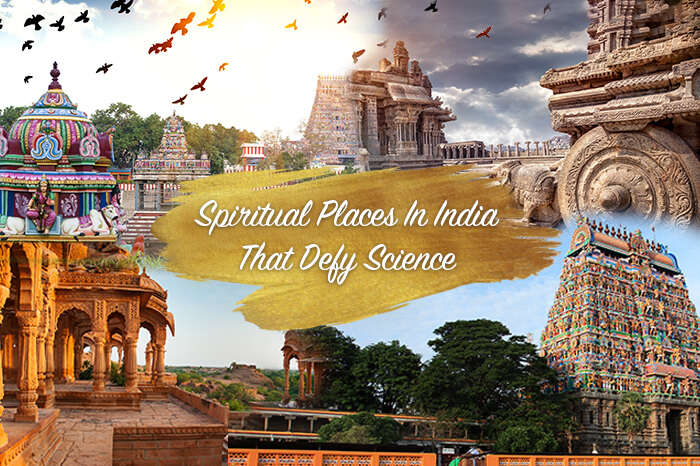 There’s more to India than what seems if only one wishes to look beyond! Often, we switch on to news channels and some of the major debates that question the reasoning of the very existence of such places catch our attention quickly. Standing firm and proud when there’s not a firm foundation, there are many holy places in India that you have to see to believe.
While we couldn’t be more sure that India is filled with more extraordinary places than you can think of, some of them surely spark a unique zone of imagination that you just cannot resist visiting.

When it comes to a diverse land like India, logic can certainly not be associated with a number of places. Here’s a list of a few holy sites that are a must visit to witness these mysterious hypes yourselves.

Located at a distance of 16 km from Mumbai, Hazrat Qamar Ali Darvesh is known for having a mysterious stone on board. Such is the legend of this stone that tourists from far off lands come to witness its grandeur. It is said that this stone is blessed by a saint and only 11 men, chanting the name of their holy saint can pick up this stone together. Many have tried and failed but there is no other way to do so. Science is yet to provide a logic for this kind of an occurrence.

Must Read: 10 Best Shiva Temples In India For Soaking In The Blessed Vibes Around

Situated amidst a lush forest region called as Nidhivan in Vrindavan is the temple of Rang Mahal. Even though there are several mythological legends attached to this place, many unnatural events in and around this temple cannot be explained with proper reasoning. Despite being a dry land, the trees present in this forest have green leaves all throughout the year and are also bent towards the Earth. Offerings such as sweets, saree, and nuts are kept inside the temple which is found to be consumed the next morning. Those who have tried to remain on the premises, post-sunset in spite of the ban either go blind, insane or die.

Himachal Pradesh has many secrets abode- one of which is the glorious temple of Jwala Mukhi that has various beliefs attached to it. When you visit, you’ll find an eternal flame burning in the premises of this temple and it is believed that this place is where the tongue of Sati, wife of Lord Shiva fell on Earth after her death. Several scientific organizations have attempted to find the source of this stunning flame but have failed to provide us with any answers yet.

Suggested Read: Famous Temples In South India That Are A Perfect Amalgamation Of Art & Divinity

Without many handy tools at their disposal, many artisans and architects have said to accomplish a unique structure that has left people wondering. One such temple of Chidambaram Nataraja Temple in Tamil Nadu creates a question in our minds when we visit this place. In the era, where such tools did not exist, the question, ‘how is it that three temples of Kanchipuram Ekambareshwar temple, Chidambaram Nataraja Temple and Sri Kalahasti temple, have been built at an exact same longitude?’ is worth pondering!

Suggested Read: 20 Mysterious Places In India To Visit In 2019 More Bizarre Than The Bermuda Triangle

Also known as the Lepakshi Temple, after the name of Lepakshi district within which it is located, Veerabhadra temple is famous for the mystery of a hanging pillar in the premise. With a total number of 70 pillars present in the temple grounds, no one has yet been able to answer how just one pillar remains detached from the ground. Visitors often check the said space at the bottom of the pillar by passing a cloth piece through the area.

Suggested Read: These 9 Mysterious Temples Of India And Their Weird Rituals Will Amaze The Hell Out Of You

Did you know that gravity is perhaps stronger than you thought? Of course, it facilitates for all life on Earth but what if you can see the effects in one region only? Well, maybe not. The head of the deities of the renowned Sugali Mata temple remains a complete mystery that is yet to be solved. No matter how many times this deity has been attempted to be made by different artisans, it is observed that after some time, the head tilts in one direction soon again. So, maybe it is something other than gravity.

What makes any place interesting is the mere site that catches your eye. However, what compels you to explore it are the legends and myths that make your journey worthwhile. Those legends that have been passed on through generations are challenging the very foundation of science. To find out more about these intriguing places, a vacation to India will prove to be just the perfect plan! So, when are you visiting?

4 Pristine Waterfalls In Calicut One Must Visit To Enjoy A Relaxing Getaway In 2020!

6 Best Picnic Spots Near Vellore Which Will Chase All The Stress In A Minute!

5 Relaxing Picnic Spots Near Ooty Which Are Perfect For That Long-Awaited Break In 2020!

4 Ideal Picnic Spots Near Kasauli One Must Visit To Spend A Happy Weekend!

Waterfalls Near Mussoorie: 4 Amazing Places To Feel The Serenity Of Garhwal

Waterfalls Near Nainital: 4 Spots To Enjoy Serene Views Like Never Before