See What Makes The Japanese New Year An Irresistible Affair Every Year! 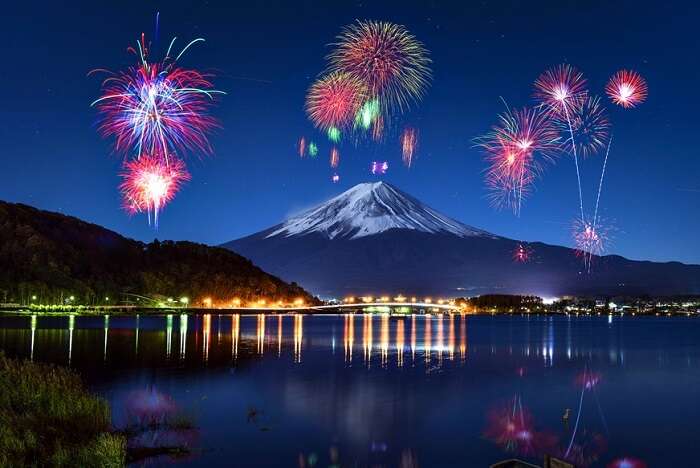 Japan is a beautiful place that is commonly known for its large population. It is also known for its advanced cities such as Tokyo and Kyoto. Apart from the advancements Japan has made, it is also a place that has beautiful scenery which includes green mountains, breathtaking lakes and, a lot more natural beauty. If you happen to be in Japan during New Year, you might be wondering what exactly you can do during Japanese New Year.

Most of the restaurants and other businesses tend to be closed during this time of the year because most people would at home spending New years. People will usually wish each other ‘akemashite-omedetou gozaimasu’ and then take part in various festivals and enjoy dishes like Mochi (rice cake) and much more.

Things To Do During The New Year In Japan

If you are wondering how to be a part of the joyous and jovial Japanese New Year traditions during your holiday then take a look at this list:

1. Be a part of the Joya no Kane at temples

Most people visit shrines and temples to rid themselves of the negative emotions and leave the past in the past. You will be able to hear the bell rung 108 times to remove past sins. This is one of the most popular New Year traditions that you can take part in. If you visit Zozo-ji temple (the most popular temple in Tokyo) you would be able to visit the ancient temple that survived the ravages of time and the aftermath of the war. The grounds will get crowded somewhere during the afternoon but you can still enjoy the forest and the beautiful greenery that surrounds this temple.

Must Read: 10 Unbeatably Fun Things To Do In Japan That All Travelers Must Try

2. Take part in the countdown parties at Port Yokohama

Visiting Port Yokohama during New Years can actually be a very fun experience. This is a great place to be for a Japanese New Year celebration because of the lively atmosphere. You can watch the fireworks go off and reflect on the sea when it’s midnight. The view is absolutely breathtaking and it continues for about 10 minutes. Thereafter you can just head off to any party that you can find on the port. You can also visit Yokohama Hakkeijima Sea Paradise which is a massive amusement park that has a huge aquarium, a shopping mall and plenty of amusement rides if you choose to spend the day. You can spend the rest of your time just exploring the port.

3. Be blown away at Mount Kaimon in Kagoshima

Since Japan is called ‘The land of the rising sun’, one of the Japanese New Year customs include watching the sunrise on the first day of the year. You can visit almost any mountain to get a great view, you can even head up to Mount Fuji if you are up for the task, but Mount Kaimon is one of the easier mountains to hike. Mount Kaimon is located on Kyushu Island that is famous for its hot springs and volcanoes. This mountain has a dormant volcano and offers a beautiful view of the ocean. You can head up here a few hours before to be able to experience the sunset, or you can take a day trip if you are up for the hike.

4. Experience the nightlife in Japan

Although most people visit Port Yokohama for their countdown parties, a lot of people like to visit nightclubs. If you want a fulfilling Japanese New Year celebration, then this would be ideal for you. You can either visit Shibuya or Roppongi in Tokyo which is both very happening places and are best known for their nightlife. There is no shortage to the number of clubs you can find here. You can head to any club you like and enjoy some great food, drinks, and music. You can hop around different clubs or party till the next morning.

5. Visit Meiji Jingu-Mae Shrine for the first prayer of the year

Another one of the very popular Japanese New Year traditions would include visiting a shrine at the beginning of the year. This is called Hatsumode. At this time people visit a shrine, make offerings, prayers, wishes and even collect plenty of lucky charms. This is one of the biggest shrines in Tokyo and is very beautiful. It was built in dedication to the spirits of Emperor Meiji and his wife. Most of the temples and shrines are crowded at this time of the year and there are plenty of food stalls and other vendors that can be found here. You can purchase amulets and necklaces to keep with you throughout the year. Most people purchase these and then burn these next year.

If you plan to visit any temples or shrines, you might just come across lion dances outside of the temples. Shishimai or lion dancing wasn’t originally a part of Japanese culture, but it has now become a large part of it. During the celebrations, the lions protect the shrines and dance around it to music. It is a very lively and fun event to be a part of. You will be able to enjoy some traditional New Year food as well as observe many Japanese New Year decorations. The lions continue to dance around until they come across people who have children, they playfully bite on the child’s head. This is said to bring good luck and good health.

Although most of the restaurants might be closed, you may be lucky enough to come across a few that might be open. If you do then you can indulge in Toshiaki soba which is a dish that is very popular and eaten during New Year’s Eve. You can also eat O-sech ryori which is a dinner item and has different elements that are supposed to bring luck and health. Another one of the famous New Year customs would include eating Mochi. This dish is essentially a round rice cake and it is also strangely used in the Japanese New Year decorations and is placed on top of several Mochis or rice cakes.

8. Read your fortune at the Senso-Ji temple in Tokyo

‘Omikuji’ is another Japanese tradition where you can have your fortune read. You will have to pay a small amount and then shake up or spin a jar which contains sticks that the fortune is folded around the stick. After you have chosen your stick, you will be able to tell if you will have good fortune or be cursed, you can find your fortune in details. You can take it with you when you leave, however, if it is a bad fortune, you can tie it back up to a section where most of the bad fortunes lie. The fortune teller there will also tell you how to change or improve your life so that the bad luck does not follow you.

Suggested Read: 15 Best Places To Visit In Japan That Make It Look Right Out Of A Storybook

9. Have fun and take part in the traditional games

Some of the most popular games that you can take part in would include ‘Hanetsuki’. This is similar to badminton but it has wooden panels that are beautifully decorated. There is also a game that children play where they spin wooden tops on surfaces. One of the most common Japanese new year traditions would include flying kites. Japanese demon kites were flown to ward off evil. You can also fly regular kites and you can find these in most shops during New Years.

The Imperial Palace is a beautiful place that has some really colorful gardens. Walking through these gardens is very relaxing. Although there isn’t much to do, there is plenty to see, which the dense forest and all the watchtowers surrounding the palace. If you visit during New Years, you will be able to see the Emperor and he will greet everyone a happy New Year. This is actually one of the rare times that the palace is open to visitors.

There are plenty of things that you can do if you are in Japan during the Japanese New Year. Although most businesses will be closed, you can take part in many of the Japanese traditions even if you don’t know any people from the locality who can show you a good time. If this interests you, then why wait? Take a trip to Japan and get ready to make positive memories this New Year with your friends and family.

Q. What is the Japanese New Year called?

A. The Japanese New Year is called Oshōgatsu in the Japanese language. It is accompanied by a traditional decoration called the kadomatsu.

Q. How does Japan celebrate the Lunar New Year?

A. Earlier, Japan used to celebrate the New Year as per the traditional lunar calendar exactly like China. But during the Meiji Era, the government of Japan decided to move towards Westernization and adopt the Gregorian calendar. So, now the people of Japan celebrate New Year on 1st January.

Q. What happens on the Japanese New Year?

A. The traditional Oshōgatsu or New Year Eve celebration in Japan is considered to be the most important holiday in Japan. You’ll find most businesses and shops to be closed from 1st January to 3rd January.

On this day, families usually gather and spend the days together. And then on the final day of the year (New Year’s eve), the traditional Toshi Koshi Soba (buckwheat noodles), are served as they are considered to be a symbol of longevity.

Q. Why is Japanese New Year so important?

A. New Year is to the Japanese and Christmas is to Christians! It marks a time for celebration, spiritual association, and being close to one’s kins. Also, it’s a great time for the Japanese people to celebrate the vivid Japanese culture, meet friends and family, and eat delicious food.

Q. Where should I go for New Years in Japan?

Q. What food is eaten on the Japanese New Year?

A. Some of the most popular dishes made and served on New Year’s Eve in Japan include:
1. Datemaki
2. Kuri Kinton
3. Namasu
4. Chikuzenni
5. Tazukuri
6. Kuromame
7. Kazunoko

Q. Why do Japanese eat Soba on New Year?

A. Eating Soba on New Year is a very old tradition that the Japanese people practice every year without fail. It symbolizes the “Passing of the Year” and is known to bring good luck and good fortune. In fact, the Japanese people associate the shape and length of the soba to a lean and long life.

Top 5 Kyoto Waterfalls For A Refreshing Getaway To The Land Of The Rising Sun!

14 Places For Shopping In Japan That Will Make Your Shopping Experience Worth It!

Luzon Island: The Longer Stretch Of Coastal Extravaganza In Philippines

Shopping In Osaka: What To Buy And Where To Shop In The Beautifully Ancient City!