Jordan In August: A Trip To The Land Of Historical Wonders 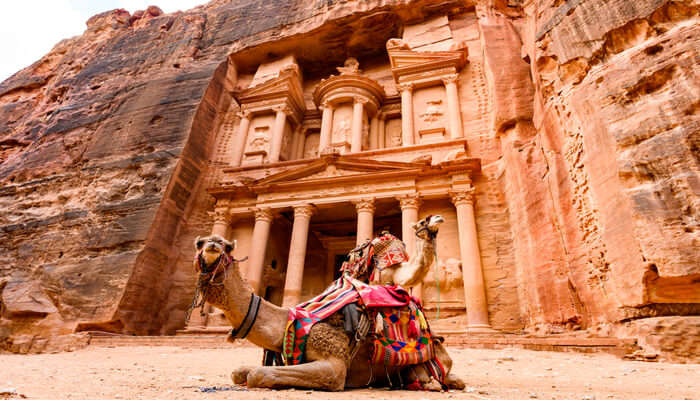 Home to one of the seven wonders of the world, Jordan is a country full of picturesque sights as well as historical sites. With that said, many consider Jordan to be an offbeat destination. However, such people are often surprised to run into large crowds of tourists when they land in the country.

The truth is that Jordan is a popular tourist country and during the peak seasons, attracts thousands to tourists looking to visit its historical sights and natural and man-made wonders. While the weather truly is pleasant during this time, the presence of large crowds can turn out to be off putting.

In order to avoid the swarms of tourists and make your journey to Jordan more pleasant, a great idea is to travel to the country in the off-season month of August.

However, there’s a reason August fell out of the “peak seasons” category. Let’s find out why and if its really a good idea to visit Jordan in August.

Weather In Jordan In August

August in Jordan is a summer month, with temperatures reaching the higher 30-degree celsius. There is practically no rainfall in the country during this month and thus, the heat is pretty dry and humidity remains low.

While the heat can be a bit overwhelming, it is not impossible to manage with the right clothes and a lot of water. The weather, however, is the most pressing reason behind the unpopularity of August among visitors.

With that said, the presence of fewer crowds does have a few advantages.

Reasons To Visit Jordan In August

The most salient advantage of visiting Jordan in August is everything is cheaper than in the peak season. You can potentially save a surprising amount of money on every aspect of your trip- from flights and accommodations to local taxis and sometimes, even on the activities on offer!

The best part is, you will not have to struggle with long queues and nativage through large crowds every time you visit a place worth visiting. Moreover, there is a good chance that you will be able to click photographs that don’t have a group of tourists.

The unique event attracts participants from all over the country that run a marathon under the scorching summer sun of Petra. The unique marathon starts in the city of Petra and the route takes runners through some of the most important relics and tombs surrounding the ancient site. Finally, the route enters the lunar-like surface of the Jordanian Desert.

Almost anyone can participate and the experience is often said to be extremely exhilarating. However, even if you’re not the kind of person that loves running under glaring sunlight, you can be a part of the event as a spectator. Simply find some shade, grab a bottle of water, and cheer the brave runners as they compete in a run of a lifetime.

If a hot desert adventure doesn’t suit your taste, maybe a cool one would get you interested. August is also a great for stargazing in Jordan. The expansive Jordanian desert, the lower footfall of tourists, and the dry weather and clear skies of August make for ideal conditions to spot some rare sightings of outer space.

However, what really makes the month of August special is the annual Perseid meteor shower that is clearly visible from the Jordanian desert. If this sounds interesting, simply head to one of the camps in Wadi Rum in August, and be a witness to the magnificence of the mighty meteor shower.

Now that we have established enough reasons to visit Jordan in August, let’s look at the best places to visit in the country.

Places To Visit In Jordan In August

The saltiest sea on the planet needs no introduction. However, what many people don’t know is that the Dead Sea is also the lowest geographical point on the Earth, outside the oceans, of course. The lake is surrounded by a number of desert beaches and mineral spas, making it one of the most interesting spots in Jordan, if not across the planet.

The Kalia Beach is perhaps the most preferred spot around the lake. The beach boasts saltwater floating and mud bath activities and has a number of bars and food vendors dotting its shoreline.

Must Read: Nightlife In Jordan: Experience The Lesser Known Side Of Jordan

Among the seven wonders of the world, Petra is an intriguing ancient city in Jordan. Carved completely out of limestone, the city was an important trade hub centuries ago. The city is accessed through an ancient gully, or siq, which is about a kilometer in length. As one walks through the Siq, the rock formations and different colours reveal themselves.

At the end of the Siq lies the treasury, known as the Al-Khazneh, which is a 43 meter high temple carved out of pink limestone. The 30 by 45 meter treasury can make the tallest men feel like dwarves, and is among the most revered man-made structures on the planet.

Being a UNESCO World Heritage site and a wonder of Earth, Petra is flooded with tourists during the peak season. However, in August, you actually have a chance to experience the beauty of Petra in solitude and comfort.

Suggested Read: 8 Amazing Restaurants In Amman To Experience The Best Food In Jordan

The capital city of Jordan is a definite must have on your itinerary to Jordan, regardless of the month you choose to visit. The city presents a unique blend of modern skyscrapers standing in juxtaposition with the ancient building that also call Amman their home.

Apart from historical monuments like the Amman Citadel or the Roman Amphitheater, Amman is also home to some truly unique and quirky terrace cafes that offer a brand new perspective on this gem of a city.

Suggested Read: Scuba Diving In Jordan: A Never Miss Out Experience For Everyone!

The Dana Biosphere Reserve, home to the spectacular Wadi trails, is a hiker’s paradise. The bioreserve is the largest one in Jordan and houses a number of hiking and trekking trails, some of which last for up to a few days.

Lined with spectacular views of the arid Jordanian landscape, the nature reserve is so large that it is not uncommon to not run into a single person during the span of 24 hours.

If you’re looking for true solitude, in the company of spellbinding panoramas, make sure the Dana Natural Reserve is part of your Jordan itinerary.

Suggested Read: Aqaba Restaurants: 7 Handpicked Places Where You Can Relish The Rich Flavors Of Jordanian Cuisine

Things To Do In Jordan In August

1. Dusk Diving In The Red Sea

Sharks, deep seas, and complete darkness, dusk diving in the Red Sea is a thrilling experience, to say the least. Don’t worry, complete darkness doesn’t mean you won’t be able to see anything, your instructors will ensure there is enough underwater lighting for you to watch as a whitetip shark swims right past you.

Even during the day, one can spot hammerhead and thresher sharks, and not to mention some surreal looking coral reefs.

Suggested Read: 6 Spectacular Things To Do In Madaba For Your Jordan Vacay!

2. Drive Through The King’s Highway

Running almost parallel to Jordan’s two most prominent highways, the King’s HIghway is an ancient route that connects the northern and southern parts of the country. While the newer highways are much shorter, and will get you to your destination sooner, driving on the King’s Highway is an experience in itself.

Further Read: 8 Madaba Restaurants That Will Provide You With The Flavours Of Jordan!

So, if you have a bit of time, and fall into the category of those who would rather take the scenic route, make sure you carve out time for a drive along the King’s Highway on your Jordan trip.

Is diving in the Red Sea safe?

Yes. While exhilarating, diving in the Red Sea is absolutely safe, even for beginner divers.

How do I get around in Jordan?

The cities of Jordan are connected with a number of bus services and trains, and just one flight route between Amman and Aquaba. Within the cities, there are taxis available. However, Jordan is an easy country to drive in, and thus, the best way to get around is to charter a private car.

How much does entry to Petra cost?

The entry to Petra for international tourists is $70.

Is Jordan safe to visit?

Yes. Despite the underlying political and social issues of the country and its neighbours, visiting Jordan is safe for tourists.