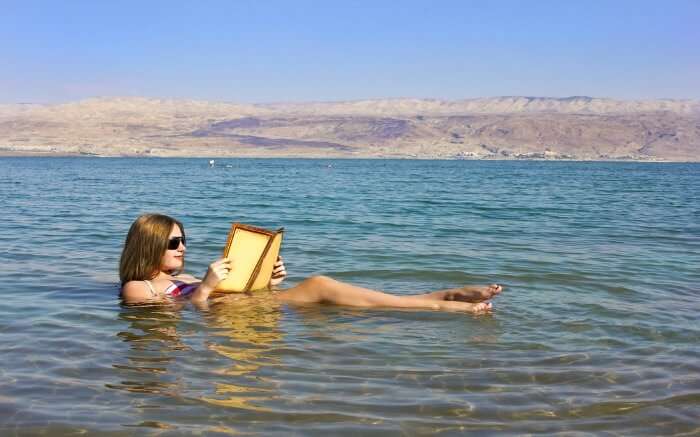 That’s how the magical nature enthralls you with its breathtaking shades and dramatic creations, and the Dead Sea in Jordan is the perfect example. BTW it’s not just Jordan but the super salty lake almost equally falls in the territory of Israel too. At 423 m below sea level, Dead Sea is a hypersaline water body well enveloped by Jordan and Israel from all sides. The high density of water doesn’t let anyone drown in its waters and body tends to float on it effortlessly when left alone. 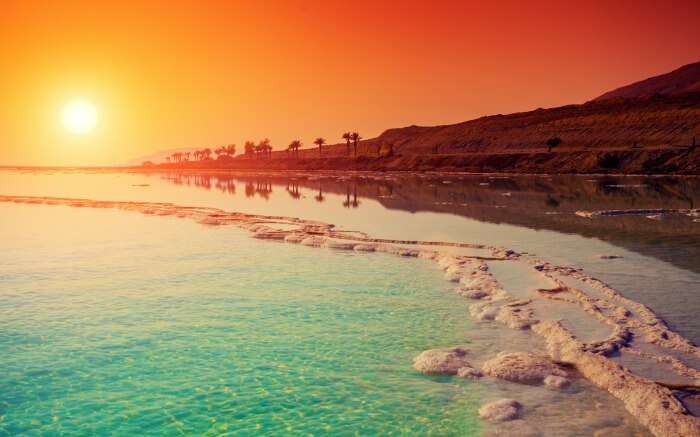 The minerals and clay found in the waters of Dead Sea possess miraculous properties that have been popular as beautifying and healing agent. No wonder why Cleopatra – the great ruler of Egypt, ordered to set up a cosmetic factory by the shore of Dead Sea!

Here, I am more fascinated about the Dead Sea in Jordan and in the coming write up we are going to discuss the same. 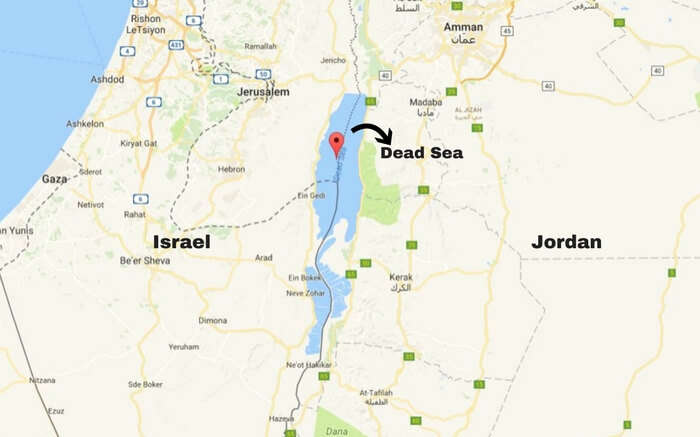 Divided by the international border separating Jordan to the East and Israel and Palestine to the west, the Dead Sea is an oasis of wonder in the middle-east Asia. The super saline water body dates back to 3 million years and is known to contain magical healing properties. Its water has saline content that exceeds dangerous limits making it extremely bitter. So, don’t even think of tasting it!

How to reach the Dead Sea in Jordan 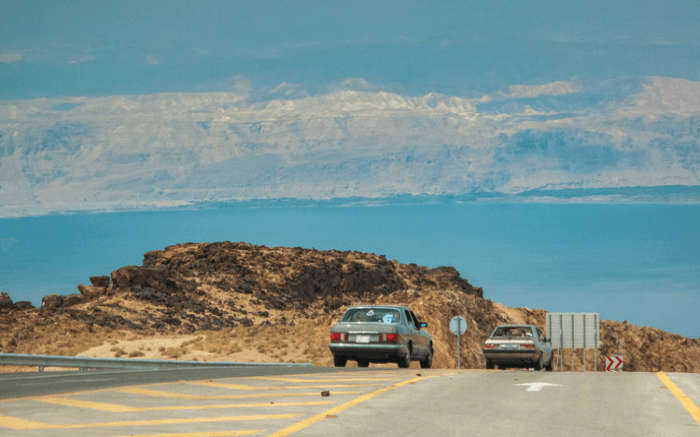 By air: Queen Alia International Airport is the main airport of Jordan and is located at a distance 52.4 km from the Dead Sea. The airport has great connectivity with countries across Asia, North Africa, Middle East, and Europe. Taxis are easily available from the airport that takes you to the Dead Sea directly. Price is mostly fixed and it would cost you around 40 JOD (Jordanian Dinar).

By road: Jordan also has proper road connectivity with Arab countries like Syria, Egypt, Israel, and Saudi Arabia. Apart from taxis, there are options to hire private buses as well. Amman is almost an hour drive from the Dead Sea.

*Daily tours are arranged from Jordan to other nearby attractions, which also includes the Dead Sea. The charges are $ 100 onwards. Find more details about the daily organized Dead Sea tour and other day tours here. 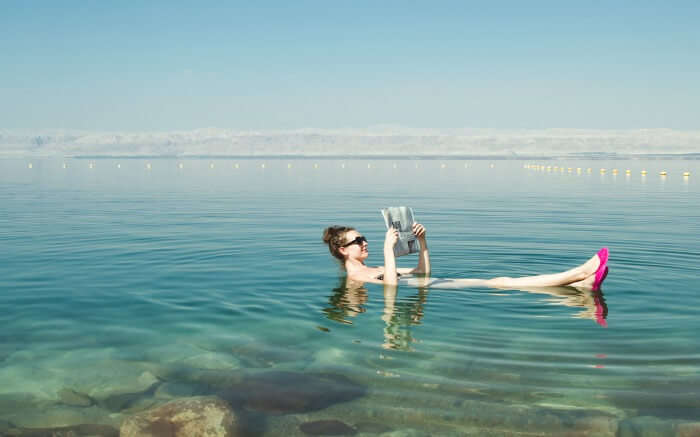 Post fall to early summers (September to early May) is the best time to visit the Dead Sea when days are slightly warm and nights are comfortably cold. Temperature stays around 23 degrees and conditions are ideal to plan a trip in and around the Dead Sea. Tourist spots in the vicinity of Dead Sea are not too crowded and you’ll love the times spent there. Fridays are not ideal to plan a visit to the place as advised by the Jordan tourism board because it’s the day when local visitors plan to chill out in the sea.

Places to see around Dead Sea in Jordan 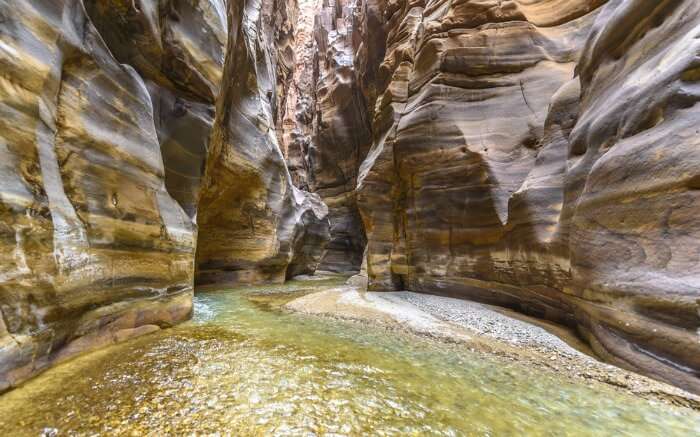 Nature’s fervent charm, the perfect scenery around, and the lofty mountains bordering the Dead Sea make Mujib a popular attraction around the Dead Sea. The biosphere reserve, at 410 m below sea level, happens to be the lowest in the world among its kind. Exciting hikes, dangerous trails, and the mesmerizing views of a rapid Mujib river flowing past define the charm of this nature reserve.

A stay in a Mujib Chalet is highly recommended to get the exceptional views of Dead Sea from the residing place. Time for some walk in the canyon? 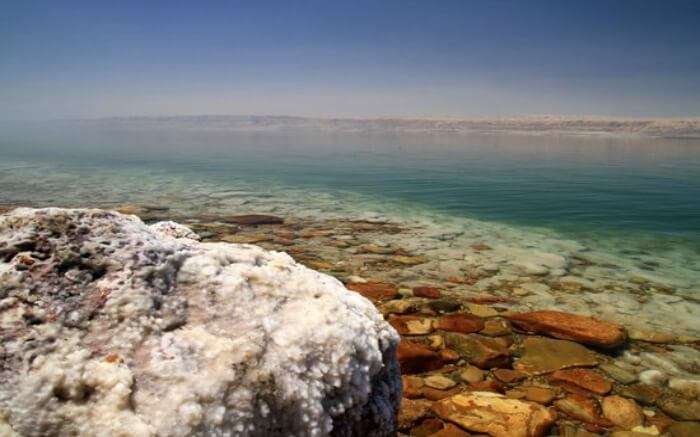 Exploring the Petra Caves and glamping in Wadi Rum isn’t all about the excitement in Jordan. The Dead Sea and its beaches are heavenly creations that look nothing less than a miracle. O Beach is a secluded spot where you get the privacy equivalent to private beach resorts.

This beach is particularly known for fascinating views, infinity pools, and landscaped terraces. And water is one shade darker of the green here!

Suggested Read: 15 Best Places To Visit In Jordan In 2022: A Blend Of Old And New 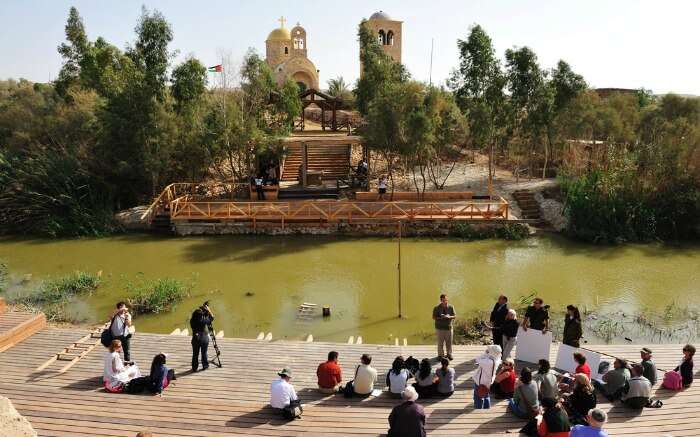 Qasr el Yahud is believed to be a holy site where Jesus was baptized by John the Baptist. The quiet place located on the banks of Jordan River has religious relevance for Christians. People, mostly enrobed in white, take a dip in the holy river. There are additional facilities to take shower, arrangements to offer prayers followed by a good car parking at the site. 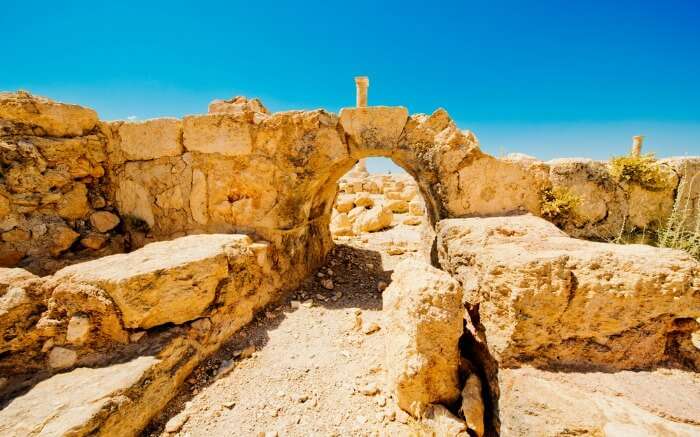 Located on the eastern side of the Dead Sea, the castle ruins of Machaerus is the place where John the Baptist was held captive and subsequently executed. Located close to the Ma’in Spa this historical site is an hour drive from Amman. 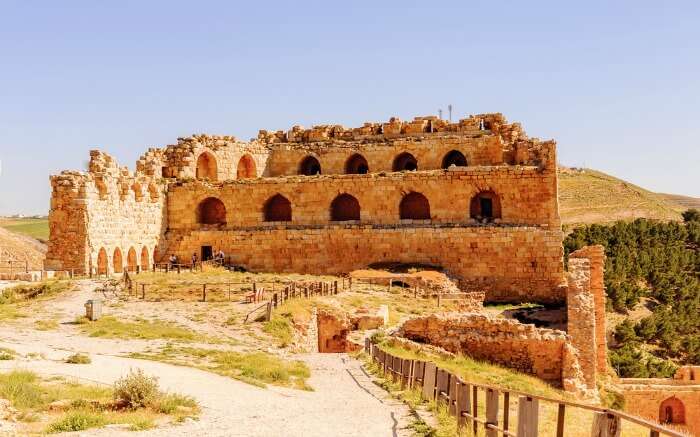 The holy land of Jordan has quite a few places of historical and religious relevance around the Dead Sea. Kerak Castle being one of them is a preserved castle from 9th century B.C that has stood the test of time. The castle offers panoramic views of the Dead Sea and surroundings and is indeed a visual treat for onlookers.

The castle exhibits Crusader architecture duly depicted by numerous corridors, stone vaults, and underground corridors, There is a Kerak Archeological Museum to the left of the castle with excavated artifacts.

Best things to do in Dead Sea in Jordan

i) Bathe in Ma’in Hot Springs 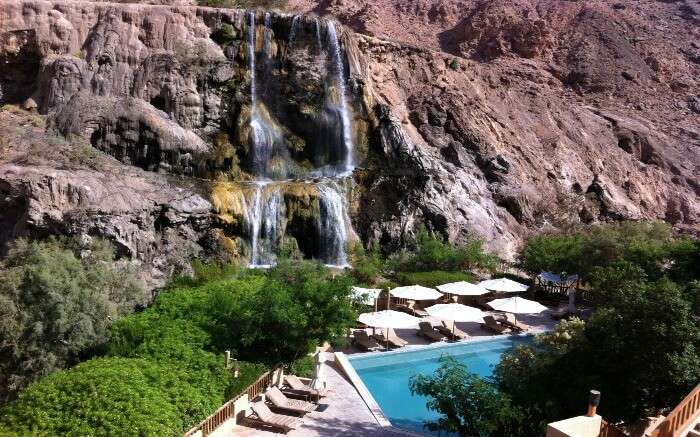 One of the highlights of Dead Sea tourism, the Ma’in Hot Spring is a mix of mineral springs and waterfalls and is a must-visit for all. Fascinating as it looks, the hot water springs cascade down the rock making it one of the most mineral-rich desert oases in the world.

The springs originate from the high land plane of Jordan with gushing torrents ending up in 109 different hot and cold springs in the valley before converging into Zarqa River. A perfect wonder in Jordan this one must not be missed at any cost.

ii) Hike up to Mount Nebo 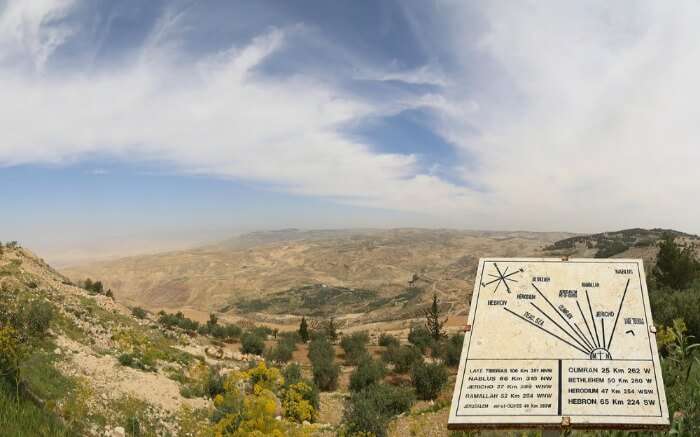 One of the prominent Biblical sites in Jordan, Mount Nebo is an interesting place to explore. Adorned with beautiful mosaics and spectacular views around, Mount Nebo offers grand views of The Dead Sea, Jordan River, Bethlehem, and a distant Jerusalem on a clear day.

The 820 m high summit of Nebo peeps down on the beautiful Dead Sea some 1220 m down. It is believed that Moses – a prophet in Abrahamic religions, saw the promised land from here. A hike to this point would give you a memorable experience on your trip to Jordan. 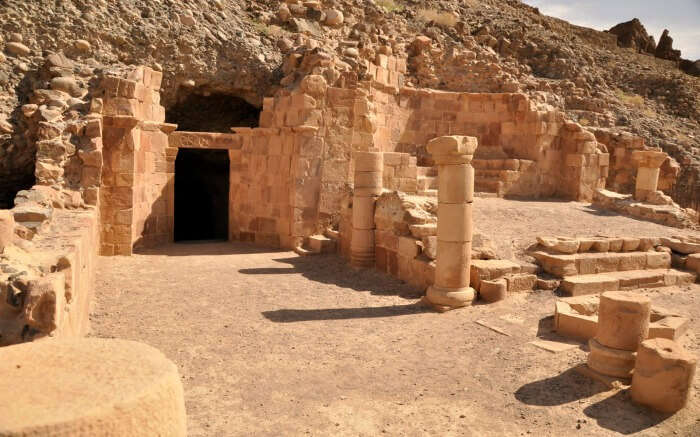 Lot’s Cave is another tourist attraction around the Dead Sea that boasts of a glorious history. The place is mostly quiet and is truly a slumbering beauty with plenty of architectural wonders around. Dead Sea’s southern shores look vibrant from here. The Pillar of Salt is a renowned structure, which is believed to be Lot’s wife who accidentally turned into the structure after looking back at the burning city.

The hike up to the cave top takes almost 10 minutes from the base, and the stairs are rather steep. Around the cave, there is also an ancient church, some wonderful mosaics, and a reservoir.

iv) Walk up to the Zara Cliff 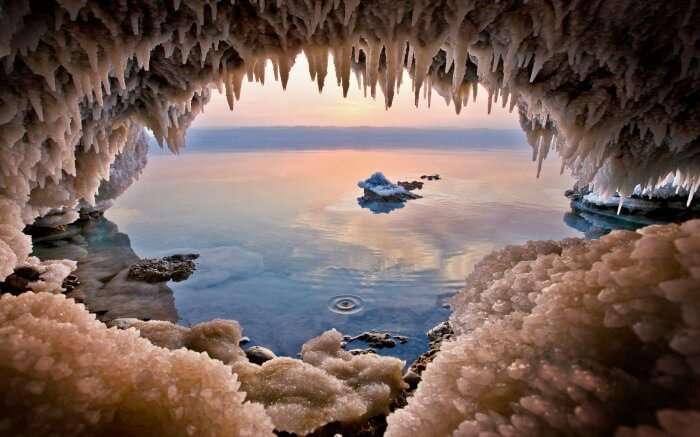 Walking the Zara Cliff is certainly one of the best things to do in Jordan and must be on the bucket list of everyone traveling around the Dead Sea region. Tucked in the Great Rift Valley, a walk around the desert trail is so comforting as you behold the volcanic rock forms and limestone structures around. Some terrific views and wonderful feel of the great land awaits you as you take this daunting trail.

Hotels in the Jordanian side are luxurious and fascinating. Depending upon their exotic locations and the range of services provided, here some of the most popular hotels near the Dead Sea in Jordan: 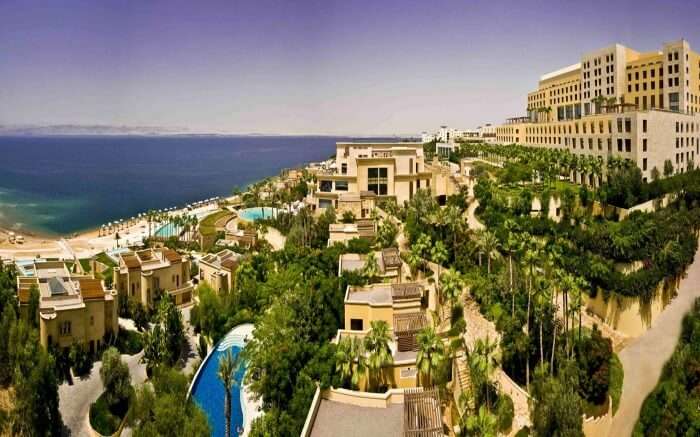 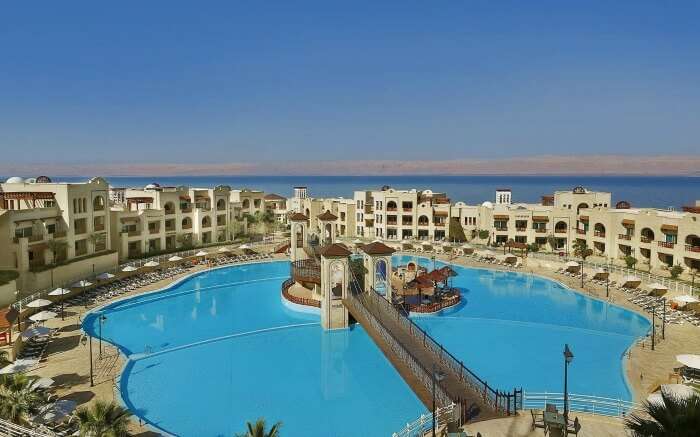 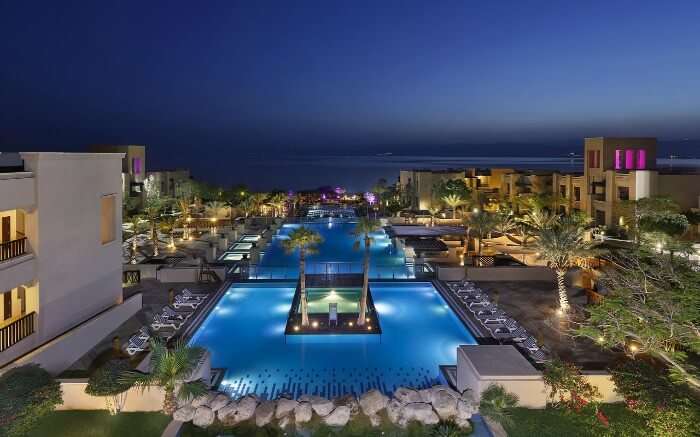 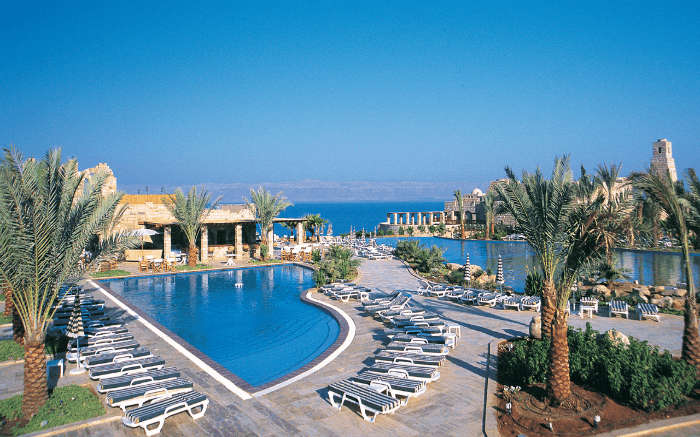 Must Read: 15 Best Hotels And Resorts In Jordan For Every Type Of Traveler 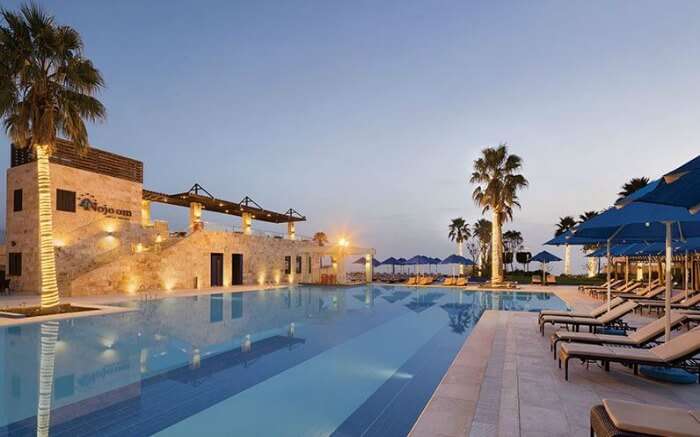 Some places of attraction near Dead Sea in Israel

The Dead Sea in Israel is equally beautiful and endearing! Right from the famous Dead Sea Scrolls to Dead Sea Spa, there’s a lot to see and experience if you are planning to explore the sea region from the Israeli side. Here’s a glimpse of the some of the must-visit attractions of Dead Sea in Israel. 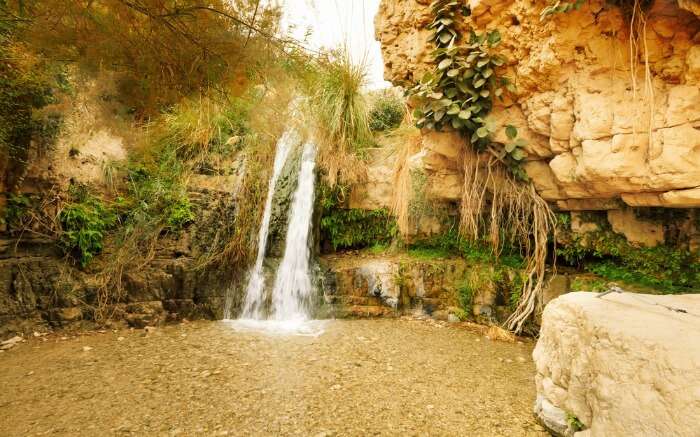 The Archeological site on the west bank of Israel lies at the foothills of the cliffs of Judean Desert. This one dates back to 2nd century B.C. 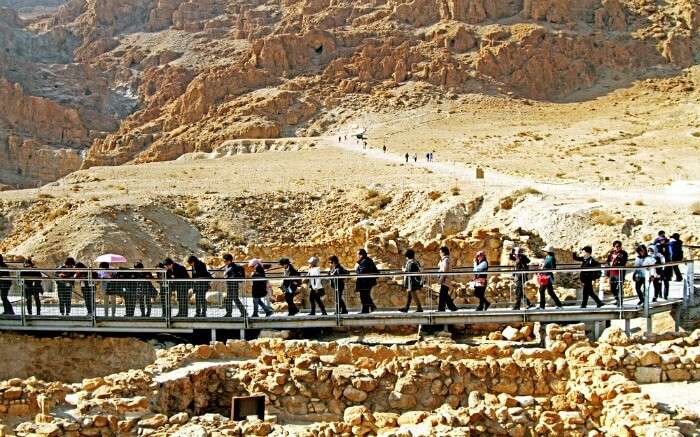 Found in Qumran Caves near the Dead Sea, the Scrolls are one of the oldest manuscripts in the world dating back to 4th century B.C. The Dead Sea Scrolls have 1500 fragments from more than 500 manuscripts. 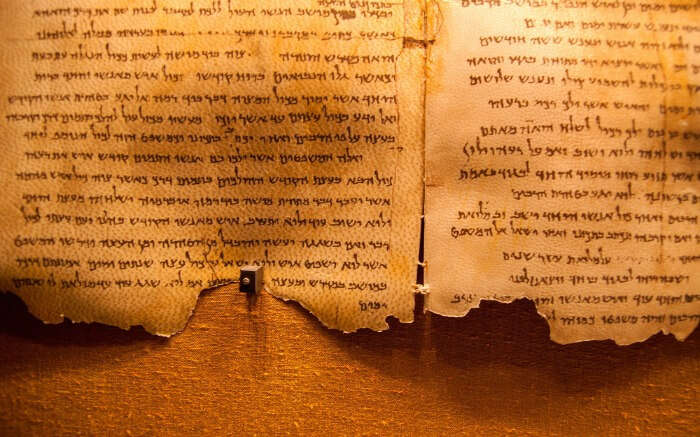 Ancient fortress near the Dead Sea with panoramic views of the Dead Sea and surroundings. Masada dates back to the 30 B.C. 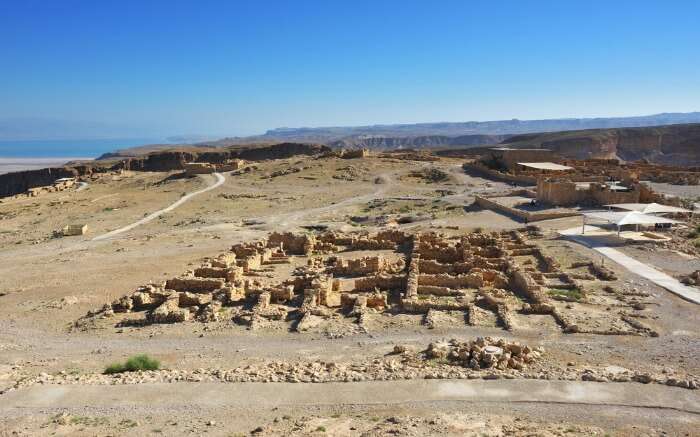 For many, Dead Sea is an unmatchable tourist destination for others Dead Sea is a pilgrimage. How is the Dead Sea going to be like for you when you would be looking for the best Jordan tour package!

Is the Dead Sea toxic?

The high salt and chemical content in the water of Dead Sea make it toxic for marine life. For humans, it is perfectly fine unless you expose a cut or wound to the saline water, which causes a stinging sensation.

The super saline water (8.6 times saline than the ocean) of Dead Sea makes it difficult for ocean animals to survive in it. That is the reason why it is named the Dead Sea.

Can you go diving in the Dead Sea?

Why do you not sink in the Dead Sea?

What animals live in the Dead Sea?

The high salinity of Dead Sea makes it difficult for sea life to flourish in the Dead Sea. Only bacteria and microbial fungi are the microorganisms that live in the Dead Sea.