Kilimanjaro Trek: A Guide To Conquer The “Roof Of Africa” 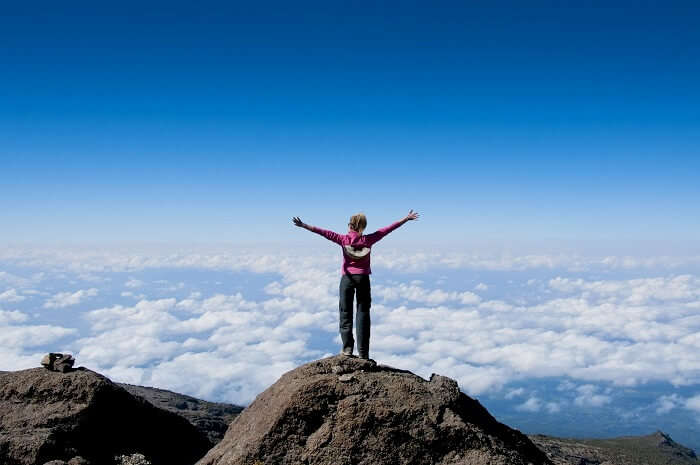 Standing at a height of 5,895 meters, Mount Kilimanjaro is the highest peak of Africa and the tallest freestanding mountain on Earth. Also known as the “Roof of Africa”, this colossal mountain is a part of the seven summits of the world, and hence, attracts numerous adventure seekers from around the globe to embark on a trek to the peak of Kilimanjaro.

For those numerous adventure lovers, here’s an elaborate Kilimanjaro trek guide, that includes everything from packing essentials to cost of the trek, and from the best time to trek to the apt routes that match your level of fitness.

An Overview Of The Kilimanjaro Trek

Featuring 3 volcanic cones, namely, Kibo, Mawenzi, and Shira, Kilimanjaro is also regarded as a dormant volcano. Numerous adventure enthusiasts travel to Tanzania every year to embark on one of the most challenging treks in the world, the Kilimanjaro trek. Here are a few facts that one must know before climbing Kilimanjaro:

Suggested Read: Explore These 15 Best Places To Visit In Tanzania To Taste The Thrill Of An African Adventure!

January to March, and June to October are considered to be the two best seasons for climbing Mount Kilimanjaro. If you have an eternal love for snow, then January to March is the best time for you to climb Mount Kilimanjaro, as this season is relatively colder, hence, the chances of witnessing snow during the summit are quite high.

June to October marks the summer season in Kilimanjaro, hence, there are relatively lesser chances of snowfall during the summit. This season is also the peak trekking season, therefore, all trekking routes are quite crowded throughout these months.

Being a mighty mountain, Kilimanjaro can be climbed through 7 different routes, namely, Machame Marangu, Rongai, Shira, Lemosho, Umbwe, and Mweka routes. Here is a brief preview of all the possible routes, along with their pros, and cons, for an easy comparison.

Also known as the ‘Whiskey Route’, due to its tough climb, Machame route is considered to be the best and the most popular route for climbing Kilimanjaro. This trail boasts of breathtaking natural bounties, and variety of flora & fauna thriving on the southern side of the mountain

Duration: 6 to 7 (including acclimatization) days

Marangu is the oldest, and most developed route for Kilimanjaro trek. It used to be the most popular route among the climbers before the discovery of Machame route. This route is also called the ‘Coca-Cola Route’, due to its easy trekking trail.

Duration: 5 to 6 (including acclimatization) days

Lemosho is one of the recently added routes to the Kilimanjaro trek, as an initiative by the Tanzanian government to reduce traffic on other routes. Lemosho is, therefore, one of the most scenic, and serene trails to Kilimanjaro, with minimum crowd even during peak seasons. This route joins the Machame and Shira routes in later days.

Duration: 6 to 8 (including acclimatization) days

Rongai is the only route to climb Kilimanjaro from the northern side. This route is the easiest trail for Kilimanjaro trek, and is best for lesser experienced trekkers. It is also the best trail for people who wish to trek amidst remote, and tranquil surroundings.

Duration: 6 to 7 (including acclimatization) days

Beginning from the Shira Ridge, this route is not as popular among the trekkers as the other routes due to the high altitude of its starting point. Trekkers who opt for this route for their Kilimanjaro trek approach the peak from the western side of the mountain, covering the entire Shira Plateau, and descend down using the Mweka route.

Approaching Kilimanjaro from the south, Umbwe route is the most difficult path to the peak. Even though it is the shortest route to Kilimanjaro, but also the steepest one. The difficulty level of this route is so high that only trained professionals dare to opt for this route.

An average budget per person per day has been taken into consideration as the budget may depend on the particular trek route chosen by the trekker. It includes the cost of accommodation, meals, transport, and other miscellaneous costs such as the staff wages, camping and trekking equipments, and so on.

Flights Per Person Till Nairobi International Airport (NBO): Starts from $885 or INR 57,500 approx. for a round trip (Based on booking done 60 days prior to departure)

Accommodation Per Day (Including Kilimanjaro National Park Entrance Fees, Camp or Hut Stay): $200 or INR 13,000 per person (including Tanzanian taxes)

Transportation Per Person: $100 or INR 6,500 per trip on the basis of the route chosen

While packing your luggage for Kilimanjaro trek, try to keep only the necessary items. Since, it is a long, and arduous trek, therefore, a lot of physical strength will be required to reach the summit. By carrying light, you will reduce the burden on your shoulders, and, hence, the extra amount of fatigue will also be eliminated.

How To Reach Mount Kilimanjaro

By Air: Traveling by air is the easiest way to reach Kilimanjaro. The city of Kilimanjaro is equipped with an international airport which is well connected to certain foreign, and African countries.

By Road: Once you reach Tanzania, then there are abundant road transports available for Kilimanjaro. One can hire a taxi, board a bus, or Dalla Dallas (minibus).

For those who wish to travel by road, can drive onto the Mombasa Road and C102 as shown in the map below to reach the desired destination in a time period of 7 hours by covering a distance of about 386 kms.

Adrenaline pumping high? Train hard and prepare yourself for a brave climb to the “Roof of Africa”, and quench your thirst for adventure by embarking on one of the most strenuous treks, the Kilimanjaro trek.

Q. Is it possible to climb Kilimanjaro without a guide?

A. One can trek to Kilimanjaro only by booking a registered guide, and porters to carry necessary amenities. Therefore, it is not possible to climb Kilimanjaro without proper planning, permission, guides, and porters.

Q. What type of animal species can one encounter during their Kilimanjaro trek?

A. Kilimanjaro National Park is home to numerous species like leopards, spotted hyenas, giraffes, warthogs, bushbuck and blue monkeys, and water buffalos. Therefore, one can encounter numerous animal species during their trek to Kilimanjaro.

Q. Is it difficult to climb Kilimanjaro?

A. Standing at 5,895 meters, Kilimanjaro is the highest peak of Africa, and also a part of the seven toughest summits across the globe. Therefore, it is classified as an extreme altitude mountain trek. Therefore, everybody cannot climb Kilimanjaro without proper training, or else they will encounter various problems such as Acute Mountain Sickness (AMS) or altitude sickness.

Snorkelling In Singapore: Top 4 Spots For A Rejuvenating Holiday In 2021

10 Enchanting Honeymoon Destinations In South Africa For A Romantic Sojourn In 2021!

Summer In Mauritius: Know All About The Weather, Experiences & Tips For Your Trip In 2021