Explore These 15 Best Places To Visit In Tanzania To Taste The Thrill Of An African Adventure! 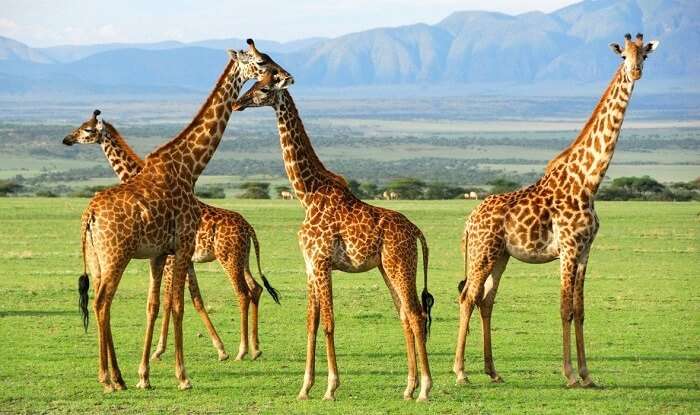 From vast wilderness to lush green islands, and from the Big 5 game to colorful corals, the East African country of Tanzania is known for its vivid wildlife, and rich aquatic life. Home to numerous islands, and monumental structures, the tropical town of Zanzibar also boasts of some of the most thrilling adventure sports, and alluring places to visit in Tanzania.

15 Best Places To Visit In Tanzania

With so much to offer to the tourists, here are some of the best Tanzania tourist attractions, that you must visit on your trip to this safari paradise.

Located in the Zanzibar Archipelago, Mnemba Island is just a 90-minute drive from the Stone Town. This private island is a heaven located. It is one of the best places to visit in Tanzania for a luxury retreat amidst extensive spice plantations, and azure ocean waters. Visit this place for a perfect private island experience where you get to live in lavish suites, relish the tropical weather, enjoy relaxing massage sessions, and indulge yourself in numerous water sports.

Suggested Read: Tanzania In December: Witness Wildlife, Adventure And Nature At One Place In 2020-21 Winters!”

Measuring 5,895 meters tall, the prodigal mountain of Kilimanjaro is the highest peak of the African continent and also the tallest freestanding mountain on Earth. This mountain is a part of the Kilimanjaro National Park which is famous for its unique faunal variety. This peak is also one of the most popular Tanzania tourist attractions amongst adventure enthusiasts as it is the base to some of the most arduous hiking, and trekking trails.

Also known as the “Mountain of God”, Ol Doinyo Lengai, is an active volcano the Gregory Rift, in the region of Arusha. Known for its unique lava eruption, this stratovolcano is one of the top places to visit in Tanzania where numerous adventure lovers flock every year to embark on a strenuous trekking journey to the peak of this mountain.

Looking for solitude during your vacation in Tanzania? Head to one of the most serene Tanzania points of interest, Lake Tanganyika. With its vast expanses, serene shoreline, and lush green surroundings, it is one of the best places to relax in the arms of nature. Here are certain facts about the lake that might lure you to this place:

Situated at the base of Mount Meru, the sprawling city of Arusha also one of the best Tanzania places to visit. Arusha is an important destination because of its location which renders it as a gateway to thrilling adventure spots such as Mount Kilimanjaro, and Serengeti National Park. Due to a soothing temperate climate, and bustling markets, it is also one of the best places to stay in Tanzania.

Known for its Big 5 Game (Lion, Leopard, Rhinoceros, Elephant, and Cape Buffalo), Ngorongoro Conservation Area is also one of the most famous Tanzania tourist places. If you want to add a dash of adventure to your trip to Tanzania, then visit this place to witness the volcanic Ngorongoro Crater, and an extensive migration of wildebeests, and zebras.

Olduvai Gorge is one of the most popular Tanzania destinations because of its historical, and biological importance. Located in the eastern Serengeti region, Olduvai Gorge is an important paleoanthropological site which consists of fossil deposits of the human lineage, that has proven as an invaluable source of information to the biologists, in the field of human evolution during the past 2 million years.

Regarded as one of the largest faunal reserves in the whole world, the Selous Game Reserve is among top Tanzania attractions that one must visit. Sprawling over an area of 5,000 square kilometers, this wildlife area boasts of over 350 species of birds, and reptiles, more than 2,000 species of plants, and an extensive wildlife which are a treat to watch. This place is also well equipped with furnished lodges for tourists to spend a night amidst the wilderness of the reserve.

Located in the Stone Town of Zanzibar, the Old Fort, is a historical heritage of Tanzania. As the name suggests, this fort is the oldest building of the town which was built by Omanis to restrain a Portuguese attack. It is one of the best places to visit in Tanzania which reflects the rich history of the town, and is also a popular place for souvenir shopping.

Another important part Tanzania tourism is the National Museum of Tanzania which takes you through the elaborate history of the country. A tour through this museum will take you past the historical colonial era, slave trading history, famous fossil discoveries of Olduvai Gorge, the peppy culture of Tanzania, and lifestyle of the locals.

Located in the Manyara region, Tarangire National Park is the 6th largest national park in Tanzania. Though it is not as popular as its counterparts like Serengeti, and Ngorongoro, it is still one of the top places to visit in Tanzania where one can encounter African variants of animals like elephants, lions, zebras, and more.

Want to enjoy the nightlife of Tanzania? Then head to Level 8 in Dar es Salaam, one of the most lively places to visit in Tanzania to experience its vibrant nightlife. Level 8 is a rooftop bar in Hyatt Regency which offers exotic cocktails, scrumptious food, 360-degree views of the harbor, and a taste of Tanzania’s party culture.

Quality Center Mall, a 24-hour shopping complex, is one of the best places to visit in Tanzania for shopping. Treat yourself to a heart-filling shopping experience as you walk past this shopping haven which boasts of numerous retail outlets of international standards, restaurants, and theatres for family entertainment as well.

Adorning the Northern part of the country, Serengeti National Park is a major part of Tanzania tourism. It is a stunning natural spectacle and also a popular UNESCO World Heritage Site, known for its unique ecosystem that comprises of extensive grasslands, distinct fauna, and attractions like Grumeti River, Lobo Hills, and Mbalageti Serengeti. This place is also famous for a massive annual migration of two million wildebeests, and other animals like gazelles, and zebras.

Bored of the wildlife safaris, and historical tours? Spend a day amidst the ultramarine sea waters, and lush greenery of the Pemba Island. It is one of the top places to visit in Tanzania to enjoy the tropical weather, witness the rich corals and the thriving underwater life by indulging yourself in exhilarating water sports.

Dreaming of a vacation at these exciting places to visit in Tanzania? Book a tailor made Tanzania tour package with TravelTriangle to explore these thrilling places, and quench your thirst for adventure.

Frequently Asked Questions About Places To Visit In Tanzania:

Q. What are the best things to buy in Tanzania?

A. Tanzanite, woven baskets, jewelry, wood carvings, colorful fabrics, tribal jewelry, and batik are some of the best things to buy in Tanzania.

Q. Which are the best things to eat in Tanzania?

A. Ugali, samaki, Ndizi Kaanga, wali wa nazi, and date nut bread are some of the best things to eat in Tanzania.