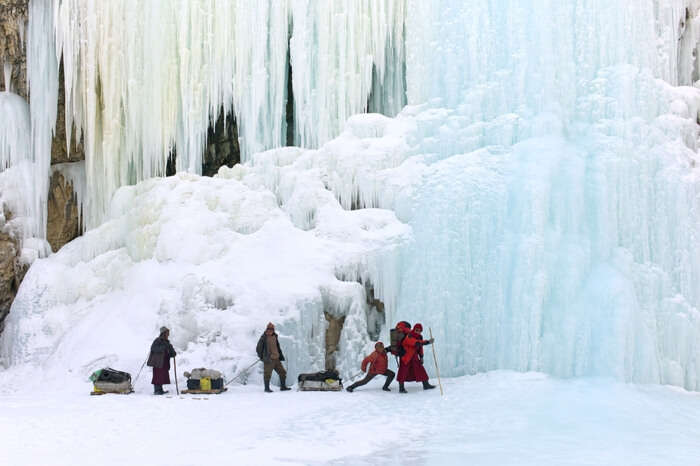 Ladakh in winter is all about the daunting trails, snow coated mountain peak, rustic maple leaves adorning the streets, and frozen lakes creating an endless streak of dreamlike frames.

Nothing gives a high as intense as high mountain passes – this is the exact meaning of Ladakh in Tibetan! Located at an average altitude of 3000 meters above sea level, Ladakh has remained the first love of almost all the backpackers, nature lovers, and adventure enthusiasts from across the globe.

Venturing Ladakh in winter season comes with its own lethal combination of fun and fantasy. Here’s a peep into the incredible journey gets!

Places To Visit In Ladakh In Winter

Ladakh in winter is synonymous to awesomeness and wonder. Geographically, Ladakh is made up of the four fantastic beauties in The Great Himalayan Range, Zanskar Range, Indus river, and Siachen glacier. All of them are spectacular in their own way.

Bordered by POK and Tibet, Ladakh has Himachal to its south and the heavenly, Vale of Kashmir, to its west. A picture perfect setting as this is too much to leave you wander lusting.

As spellbinding as it seems, Leh-Ladakh in December is equally unpredictable. Therefore, don’t plan to stick to a predefined itinerary. Weather conditions during winter just love messing with your schedule and you have to be mentally prepared to take it as it comes. A step forward and you are ready to contain the uncontainable!

1. Hemis National Park: The Natural Habitat Of The King Of snow

Named after the famous monastery Hemis Gompa, the Hemis National Park Sanctuary is an ideal destination for sightseeing in Leh-Ladakh in winter. It is also the first national park in India to be established north of the main Himalayan Range. Mostly frequented by the trekkers, there isn’t much of a proper settlement in the region. So one has to plan a makeshift arrangement in the form of a tent or a hammock, for an overnight stay.

Hemis is home to a large number of rare species that are found especially at high altitudes. Some of the exquisite species found in the park are the rare shapu, bharal, and the snow leopard. Among others, the wolf, Pallas’ cat, ibex, Tibetan argali, and the Ladakh urial can also be sighted at Hemis.

Snow leopard comes down the valley when the mercury dips down the freezing point and on such rare occasion they can be sighted at the Hemis. Bharal or Blue Sheep and Urial make for easy sightseeing in Leh-Ladakh in December. Also, they stay at altitudes higher than other animals and frequent the place during winter.

One of the toughest terrains in the world, Kargil is the second largest town of Ladakh after Leh spanning across 1500 km of area. Stationed at an altitude of almost 2700 meters is quite near to the Line of Control.

As they say, if it’s beautiful, it’d be difficult; and so is Kargil. Ideally, it’s recommended to visit the place during the months of May – August, but winter gives a completely new makeover to the place. With temperature freezing down to -15 to -20 degrees, it becomes a perfect place in Leh-Ladakh in winter for nature aficionados.

Suggested Read: 9 Places To Visit In Leh Ladakh For A Spell Binding Effect

3. Pangong Tso Lake: Where Time Stops To Gape At Beauty

Wearing the darkest shade of blue and holding the imposing mountain ranges in the backdrop, Pangong Tso lake is the world’s highest saltwater lake stationed at an altitude of 4250 meters above sea level. En route to the lake, one has to ride through Khardung La – the highest motorable road in the world.

As the lake is either partially or completely frozen during winter, it gives a feeling of being transported to the ice age. But in the end, it is the priceless experience that you carry along.

Suggested Read: 8 Experiences That Make Ladakh In May 2020 A Heartwarming Trip

Brownie cake with icing sugar topping! That’s how the Nubra valley looks like in winter. Sandwiched between Kashmir and Tibet, the valley is among some of the most exquisite sites to stroll in Leh-Ladakh trip in winter. Situated 150 km from Leh, Nubra is known for lovely orchards, scenic vistas, Bactrian camels, and quaint monasteries.

One has to cross Khardung La to reach Nubra. The valley looks arid from a distance but it is here that you find the prime farmlands. Precisely the reason why the valley has been bestowed with the prestigious tag of Orchard of Ladakh.

Some of the monasteries in Nubra valley: Ensa, Samstemling, Diskit, and Hunder

Remember: A lot depends on the current weather conditions. Most of the passes leading to the gorgeous valleys remain inaccessible because of heavy snowfall. Brace yourself and hope for the best.

Suggested Read: Magnetic Hill In Ladakh: A Handy Guide To Unravel This Mystery In 2019

Ladakh is all about towering peaks and vast mountain ranges, but make sure you spot the colorful flags perched at the top of these peaks and the territory around is guarded by one of the monasteries. Yes, these are monasteries and gompas of Ladakh and the town has a lot of them. Most of them have been favorite of Bollywood filmmakers.
But you have a task cut out in making it to these monasteries during winter because most of them remain veiled under thick layers of snow and path leading to them remain clogged for the entire winter season. However, here are a few monasteries that can still be accessed during winter in Ladakh.

Some of the popular monasteries to visit during a Leh-Ladakh trip in winter are shown below:

Suggested Read: Travel To These Buddhist Monasteries In India To Find Inner Peace

Things To Do In Ladakh In Winter

Rustic trials make for the heart and soul of the trip to Leh-Ladakh in December. The hostile trek routes become even more challenging when they are coated with a super slippery layer of stiffened snow, as thick as 10 inches.

Chadar, being a special attraction in Leh-Ladakh in December, is known more popularly for the Chadar Trek – counted among the world’s toughest treks. Given that you have to walk on a frozen ice for a distance of 100 plus kilometers under freezing conditions makes it even more thrilling. The crunchy sound of disintegrating snow sheets beneath the feet pumps up the adrenaline while sub-zero condition make is as challenging as it could get.

The extreme chilly weather leaves the Zanskar lake frozen as the temperature reaches below freezing point. The lake thus turns a subtle sheet of ice, which is ideal for trekking. The overall beauty of the trek imparts a unique never ending impression on a traveler’s mind.

Suggested Read: 9 Astounding Treks In Ladakh That Need To Be On Every Hiker’s Bucket List

The trek in Hemis National Park is another crowd puller in the northern frontier of the Himalayas. The Snow Leopard Trek in Leh-Ladakh in winter is popularly known for sighting the wildlife in the park, especially the Himalayan big cat, which is an endangered species and the pride of the Himalayas. The elusive cats are difficult to spot because most of the time they are camouflaged by snow in the background.

Further, the diverse flora and fauna of the Trans-Himalayan region make it a must explore place. The entire trail is dotted with mud palaces and magnificent Buddhist monasteries, which makes it even more interesting. This popular winter trek in Leh Ladakh region certainly brings the best out of a traveler, therefore one has to be in their prime take this trek.

Walk the daunting treks and don’t forget to experience some of the most exciting things to do in Ladakh when you are around.

Tips For Traveling To Ladakh In Winter

Homestays in mountains make for an ideal retreat. They provide an affordable and easy stay in the valleys. Ladakh being a vast and secluded terrain doesn’t boast of luxury resorts comfy hotel stays. But when we speak of the people of Ladakh, they are peace-loving, warm and approachable.

As you plan to venture across the valley, the locales become an ideal Ladakh winter travel guide who open their heart and gates for the fellow travelers coming to the valley. Along with the comfort, they ensure that travelers get good food and basic facilities, and for all that they charge a nominal rate. The villages along the trekking routes get trained by private institutes and trusts to ensure that travelers coming to Ladakh have a wonderful time there.

Some of the most prominent homestay options for your trip to Leh-Ladakh in winter are:

Suggested Read: Ladakh In April 2019: When Your Adventurous Heart Yearns For The Himalayas!

Must Read: 10 Hotels In Leh Ladakh For A Cozy Stay: Luxury And Budget Options

Additionally, you can also consider staying in Himalayan homestays in the breathtaking locales of Hemis National Park, Zanskar Sham, and Zanskar Lugnak Valley.

How To Reach Ladakh In Winter

With ample of commuting options available, traveling to Ladakh is not a big deal anymore. But it is a big deal in winter when Manali-Leh highway is completely blocked because of the heavy snowfall. Therefore, your traveling options are reduced to airways and railways.

By air: Leh airport is the nearest airstrip, which is well connected to Delhi, Jammu, Srinagar, Chandigarh, and several other cities in India

By rail: Jammu Tawi is the nearest railway station at a distance of 700 km from Ladakh

With attractions, places to visit, things to do, tips, and stay options being sorted, it is time to go ahead for an adventurous Ladakh trip during the winter season. Ladakh in winter will definitely ensure you undergo one of the best travel experiences you’ll ever have.

Q. How cold is Ladakh?

A. During the summer season, the temperature goes above zero degrees in the day and the night is below -30°C. Ladakh in winter observes a major drop in the temperature, reaching -40°C.

A. Attractions like Pangong Lake and Nubra Valley can be accessed in the month of December. However, if it is snowing around Chang La, you may not be able to visit this place.

Mountaineering In Ladakh 2020: A Handy Guide To Satiate The Adrenaline Rush!