8 Experiences That Make Ladakh In May 2020 A Heartwarming Trip 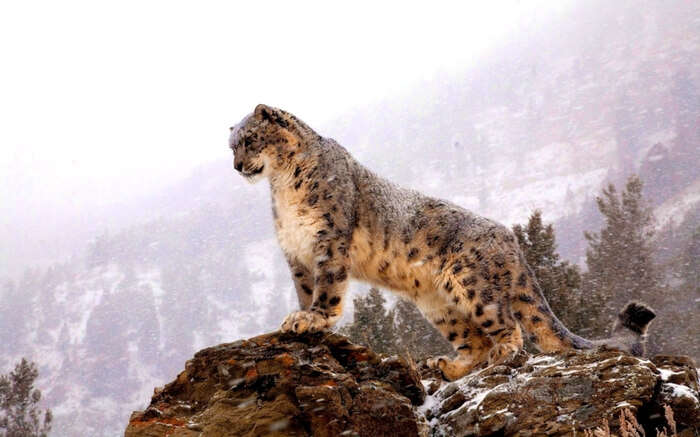 Walking into an unmarked territory fills you with excitement and you are unsure about things! But, what is going to unfold is an incredible series of events that would leave you thrilled. Ladakh in May is one of those destinations that cast the picture of a wonderland after facing yet another harsh winter.Scattering beauty everywhere around, the rugged Himalayan mountains and virgin trails cutting through them hold plenty of treasure. As you keep ascending the ‘heights’ of awesomeness, the magical surroundings around the top would dope you with unbelievable vistas.

Ladakh In May Weather

Pretty monasteries sitting atop the mountains, frozen rivulets and streams, incredible ride across the most daunting passes, and maybe a wandering snow leopard, if at all you are super-lucky, make for a glorious Leh Ladakh in May. Ladakh temperature in May could be anything between -15 to 16 degrees, therefore adequate preparation is required before you set foot for the beautiful place in the north. Should you plan on a Ladakh trip in May, these experiences would come handy. If you are expecting snow in Leh Ladakh in May, then you will only find hard ice, not fresh snowfall.

Top Experiences In Ladakh In May

If you are visiting Leh Ladakh in May month, do not miss out on these exhilarating experiences on your journey. These fun and action-packed experiences are bound to make your Ladakh trip in May an affair to remember.

1. Trip To Dras In Kargil

For the kind of mountain pilgrimage that it is, Ladakh bedazzles its visitors with its striking landscapes. And while discussing the beauty, it’s the gateway to Ladakh that makes a remarkable impression on us. At 10,700 feet Dras is the coldest inhabited hill-station in the world and is the famed gateway to Ladakh. Winter in Dras is indeed the most extreme event in the valley when the mercury drops down to as low as -45 degrees. May is the time when views around are perfect and everything around looks so fancy.

Trekkers absolutely love the experience of this 5-day trek which is located at an altitude of 5200 meters. The best part of this trek in May is that it encompasses the best of Ladakh. While there are a few guest houses and hostels available, homestays are the most sought after stays that would let you experience Ladakhi culture like a local on your Ladakh trip in May.

The campsite along the streams and in the remote villages stand out from the rest. Interacting with locals make the highlight of these homestays in Ladakh. May–November is the perfect duration to take this Ladakh trek.

Tip: Try to start early so that you can cover all monasteries on the same day.

MustRead: 8 Tourist Circuits To Cover The Best Of Ladakh

Ladakh differentiates between a tourist and a traveler. Scaling the mountain pass at 17582 feet which happens to be one of the world’s highest motorable roads is a gut-wrenching experience. Khardung La top is 39 km away from Leh town. While May is a great time for trekking in Ladakh, it also happens to be an ideal time for a motorbiking or mountain biking expedition in Ladakh. Besides, this also happens to be another top photogenic place in the Leh Ladakh region. If you wish to visit Ladakh in May, then this should definitely make it to your bucket list.

This map would come handy when you are in and around Khardungla top!

Nearby attractions: Tso Moriri Lake, Hall of Fame, Gurdwara Pathar Sahib
Tip: Only ride or drive to this point in a recently serviced and sturdy vehicle.

Suggested Read: 15 Places To Visit In Leh Ladakh For A Spell Binding Vacation In 2020

Monasteries of Ladakh are neatly strung across the vast Himalayan land and have stood the test of time. These monasteries from centuries ago still uphold the customs and rituals that their precursors started long back.

May is a bit too early for these gompas and monasteries in Ladakh to shed the white sheet of snow that they wore months back at the beginning of winter. Therefore, they become a striking attraction for all the visitors planning a trip to Ladakh in May.

Tip: Respect the rules regarding discipline and dress code laid out by these monasteries.

Suggested Read: Visit These 10 Monasteries In Ladakh For A Purifying Experience

Commemorating the life of Buddha, Saka Dawa Festival celebrates the goodness of the lord and Ladakhis try to inculcate the practices in their daily life. It is believed that any good deed done during the entire month multiplies hundred million times over and comes back to you. The festival is celebrated for an entire month and the most auspicious day is the 15th day which happens to be a full-moon day. People from various parts of the world and the country will be visiting Ladakh in May 2020 to be a part of this festival.

Tip: Respect the local traditions and customs during festivals in Ladakh.

Suggested Read: 10 Ladakh Resorts That Are Ideal For A Splendidly Comfortable Experience

While watery eyes would peer around delving deeper into the expanse of white which, for the most of the time stays under sub-zero degrees, you must brace yourself for one memorable sight whether you visit Ladakh in April or May. And it would be that of the emperor of the Himalayas, the Snow Leopard. They are one of the endangered species on Earth right now, and certainly the fascinating beauties in the Himalayas. But they only venture out when winter is at its peak.

May could be the month when they might appear from behind one of the mountains while chasing a mountain goat. That’s what you can pray for when you visit Ladakh in May 2020. These elusive beauties aren’t easy to spot.

Tip: Take a guided tour if you want to increase your chances of spotting wild animals like snow leopards.

Suggested Read: 10 Festivals Of Ladakh That Celebrate The Life In The Valley

Masala chai, noodles, and momos, that’s what you get served at Rinchen Cafeteria, the world’s highest cafeteria at 18380 feet. Catch some breath, and comfort yourself at Rinchen Cafeteria while at Khardung La. Doesn’t really matter which month of the year you are traveling to, Indian Army can be spotted in this part of Ladakh throughout the year. Not a single soul apart from Army personnel can be spotted here. Travel to Ladakh in May add this cherishing moment to your sweet memories with friends. Maggi and mountains do have a strong connection and when you are in Ladakh it makes it all more special.

Suggested Read: 6 Best Things To Do In Ladakh In June For A Soul-Satisfying Vacation

By the second week of May, the crucial Srinagar-Leh highway opens up leading to a flurry of tourism energy into Ladakh. And thus opens the gateway to Pangong Tso Lake. The azure beauty looks like an artist’s fantasy. At 14,270 feet, the lake stretches from Ladakh to Tibet in the north.

Shutterbugs find eternal bliss here capturing, mountains, lake, boulders, and trying compositions like mountains with lake and builders with mountains. Early May is the time when the lake is partially frozen and infinite landscapes and views would complete your trip for sure.

Suggested Read: Head To Ladakh In Winter For An Adventure Of A Lifetime

What To Wear In Ladakh In May

Image Source
Even in the month of may, temperatures can drop down in Ladakh. So, you must be prepared for all kinds of weather situations. Pack light, cotton shirts, and trousers for the day. Have a down jacket and a warm sweater for the night. Do not forget to pack a raincoat for sudden downpours. Socks, cap, and sunscreen are also an important part of the packing list.

Suggested Read: 4 Ladakh Guest Houses To Plan A Comfortable And Budget Friendly Stay At In 2020

Road Conditions In Ladakh In May

Image Source
May is the time when the highway just opens. So, you may find melting snow and slush on the road. There wil be mud and even a few streams of water. Some of the patches on the highway are rough and terrible. Though rest of the road is fine. You may also find jams during the peak season or long line of trucks on the highway.

Further Read: Pangong Tso Lake: At 4350 m It Will Take All Your Blues Away

By the way, North India in May is already a furnace, and all you need is some fresh air sourced from the mountains! What could possibly be a better place than the Himalayan kingdom! Hope you have found all the necessary information about Leh Ladakh in May. What is stopping you now? Just plan a trip to Ladakh and get Leh’d in the most spectacular way!

Frequently Asked Questions About Ladakh In May

Q. When is the best time to visit Ladakh?

A. May- September is the best time to visit Ladakh

Q. When is the best time to visit Leh Ladakh on a bike?

A. June-July is the ideal time to visit Ladakh on a bike

Q. How to reach Ladakh?

A. Leh airport is the nearest airstrip to Ladakh from where Ladakh can be easily reached by road. However, Ladakh can also be reached from Manali via Rohtang Pass.

Q. Is Manali Leh highway open in May?

A. Yes, it opens in May. The info is released online. So, you will have to confirm the dates before you plan a road trip.

Q. Is Leh and Ladakh same?

A. No. Ladakh is a region in Jammu and Kashmir which is divided into two districts; Leh and Kargil.

Q. Can we go to Leh Ladakh by car?

A. Yes, people even plan an exhilarating bike trip to Ladakh. So, you can take your car if you want. It will be a long journey, but a splendid one.