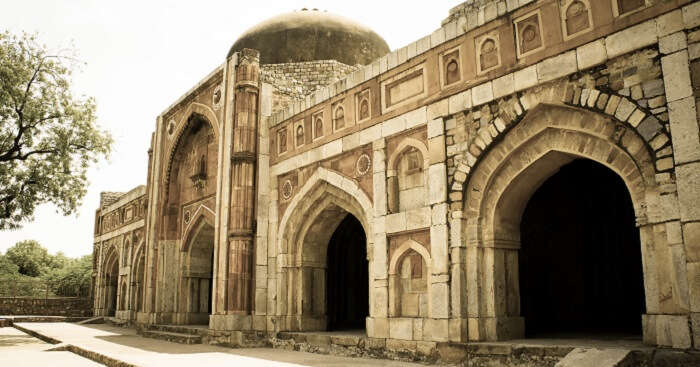 I could not help but smile, pondering – is it that easy to introduce this city? Being a Delhiite by religion, I did empathize with this guy’s impression of my city. Actually this is the reason why a city like Delhi scores lovers like Ghalib and Dinkar! You keep discovering it beyond layers and with each layer, you keep falling in love with it… And even a mere knowledge of the most apparent things drive you so passionate that you can’t keep yourself from sharing it out loud with everyone.

Anyways, coming back to what came across as a concern – obviously, there is a lot more to Delhi beyond these highlights. I am daring to go beyond these layers and bring forth these places in Delhi which have either remained untouched or to be blunt, ignored for long.

1. Not so haunted but serene Agrasen Ki Baoli in Connaught Place

Image Source
Located on the outskirts of busy Connaught place, Agrasen ki Baoli is believed to be a monument from 12th century AD. The cold spot at the bottom of the Baoli has, allegedly, made it a haunted spot.

2. A fort-full of histories and heritage in Tughlaqabad Fort

Image Source
The historic fort is a huge ruin spread over a perimeter of 6 km. Built by Ghiyas-ud-din Tughlaq, it was the wall that protected the city from the Mongol attacks. The monument, today, remains scarcely visited and largely unmaintained.

Well this one was a real surprise after the locals narrated a story of a plane crash which demolished the tall minar in Uttam Nagar.  For history buffs, it was built by Shahjahan and used as a hunting lodge during 1650s.

4. Hard to believe something like Bharadwaj Lake of Asola can coexist with the all new face of Delhi

Image Source
On the outskirts of the city, this lake and the hills surrounding it are a hard to believe site in the city. The lake is surrounded by the Asola wildlife sanctuary and maintained by the Indian army.

5. 9 Homes of Naughara at the end of Paranthe wali gali

An alley behind the famous Paranthay wali Gali contains these nine colorful Jain havelis which have maintained their charm since the early 18th century. The street also has the ancient Jain temple and a museum that is run by one of the families.

Must Read: 32 Places To Try Street Food In Delhi That Is Worth Every Calorie

Image Source
The tower of thieves aka Chor Minar is a 13th century minaret situated near Aurobindo Marg in Hauz Khas. Built by Ala-ud-din Khilji, it was used for displaying severed heads of thieves and criminals on a spear through the 255 holes on it.

Image Source
In Ballimaran, at the end of Gali Qasim Jaan, is the home of the 19th century Urdu poet Mirza Ghalib. The Archaeological Survey of India maintains the heritage site and its various displays that depict the times and life of the legendary poet.

Image Source
A serene retreat in Nizamuddin area of Delhi, the khanqah is where the 14th century saint lived and offered his prayers.

Explore The Ultimate List Of Weekend Getaways Near Delhi

Image Source
Also famous as Lal Darwaza, this monument earned its name when the three sons of Emperor Bahadur Shah Zafar were shot at the gate on September 22, 1857. It lies today on the Bahadur Shah Zafar Marg opposite  Ferozshah Kotla ground.

10. And of course, the ‘Sair-i-Gulfaroshan’ from Jahaz Mahal, Mehrauli

Image Source
For starters, the monument got its name due to its reflection in the adjacent water reservoir in Hauz-e-shamsi. It was built during  Lodhi dynasty rule as a sarai(leisure spot) and is famous for hosting the annual Phoolwalon ki Sair festival.

Guilt tripping, ain’t you? Not unusual. This happens when you get to know something new about your beloved when it was there, all along waiting for you to acknowledge them So? Embrace them and explore your beloved and let it enchant you.

If explored enough, try your hands at our Delhi Quiz

Which is the most beautiful places in Delhi?

Lotus Temple is one of the most beautiful places in Delhi. It is a place of worship associated with Baha ‘i faith. It is notable for its flowerlike shape. It is open to all, regardless of religion or any other qualification.

Where can I spend my evening in Delhi?

You can spend your evening enjoying the light and sound show at Red Fort, heading to Pandara Road for lip smacking street food, and relishing parathas with lassi at Moolchand Parathe Wala, among other fun things to do in Delhi.

Which is the best place in Delhi for couples?

Some of the best places in Delhi in couples include Garden Of Five Senses, Lodhi Garden, Hauz Khas Village, Parthasarathy Rocks in JNU.

Where can I enjoy in Delhi?

You can spend your day visiting Delhi Haat in INA, India Gate Complex, and Ridge Road in North Campus to have a good time.

Delhi is a fairly safe place to visit for those who can defend themselves against huge crowds and other malices that usually come with an enormous city.

Where can I spend Sunday in Delhi?

You can spend Sunday in Delhi by taking a walk to India Gate, visiting Rashtrapati Bhawan, boating at Old Fort, and ending the day with a meal at the India Habitat Centre.

Is Purana Qila safe for couples?

Yes, Purana Qila is safe for couples. You can enjoy a romantic boat ride with your partner and click pictures of yourself against its backdrop.

Why is Delhi famous?

Pretty Soon You’ll Be Able To Travel From Delhi To Jaipur In 90 Minutes Only!

30 Reasons I Would Rather Be In Delhi Than Anywhere Else