Magnetic Hill In Ladakh: A Handy Guide To Unravel This Mystery In 2021! 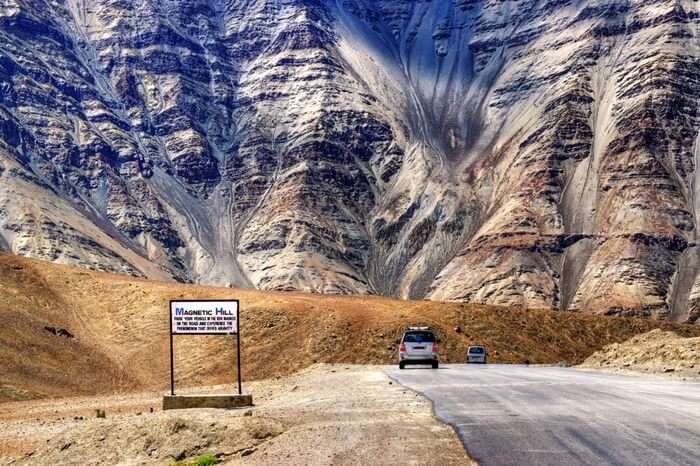 Located at a distance of 30 km from Leh city on the Leh-Kargil Highway is a small stretch of road that defies the phenomenon of gravity. The reason is the magnetic hill that pulls stationary vehicles upwards. Famous as the Magnetic Hill in Ladakh, it is a major tourist attraction in the valley and a perfect pit-stop for tired riders moving on the highway.

About Magnetic Hill In Ladakh

The strange world that we live in, there are plenty of theories backing this strange wonder of nature. All of them propose a different logic and are backed by strong reasoning, barring superstitions like ‘the magnetic road is a straightaway to heaven’. Here’s a look at what each of these beliefs and theories have to say.

Villagers residing in the magnetic hill of Ladakh believe that there once existed a road that led people to heaven. Those who rightly deserved were pulled to the path directly while those who didn’t deserve could never make it there.

Next comes a sensible theory, which is also the most widespread. It states that there is a strong magnetic force emanating from the hill that pulls vehicles that are within its range. The strange occurrence on the Leh-Kargil highway has been experienced and testified by travelers from across the world. As a matter of fact, the notorious hill has caused planes of Indian Air Force to divert their route in the past to avoid magnetic interference on them.

Another widely accepted theory says that the hill is no source of magnetic force, rather it’s just an optical illusion that makes the downslope of the road leading to the Magnetic Hill Ladakh, India look like an upslope. So, when you see the vehicle going uphill, it is actually going downhill.

There are people who believe Magnetic Hills to be characterized as Gravity Hills that can be seen all across the world. Some of the popular examples of Gravity Hills are Tulsishyam in Gujarat, Electric Brae, and Gansu in Scotland and China respectively.

Suggested Read: Snowfall In Uttarakhand, Himachal, And J&K Turns The North Into A White Wonderland

Image Credit: Gktambe  for Wikimedia Commons
Wondering which are the best months to head on your enthralling journey to this mystical hill? The best time to visit the Ladakh Magnetic Hill is from July to September. The roads are clear at this time of the year and the weather is just right to explore Ladakh and its beauty.

Sitting pretty at an altitude of 14,000 feet, Magnetic Hill is located on the Leh-Kargil-Baltic National Highway in the Trans-Himalayan region. Sindhu river flows to the east of Magnetic Hill and makes the surrounding a picture-perfect frame.

Blessed with amazing natural beauty and mysterious magnetic abilities, the magnetic road in Ladakh is where travelers stop by to experience the strange, gravity-defying phenomenon. A yellow box marked on the magnetic road, few meters away from the Magnetic Hill road, Ladakh indicates that the vehicle must be parked in neutral gear.

It is from here that the vehicle starts to move at a speed close to 20 kmph. By now, several curious travellers have recorded and uploaded magnetic hill road, Ladakh online for everyone to see! So, is the magnetism really this strong at Magnetic Hill in Ladakh? Or it is just a mind-blowing illusion? Let’s look at both possibilities!

Suggested Read: 7 Secrets Of Ladakh That Only The Hills Whisper

How To Reach Magnetic Hill

By air: Magnetic Hill is at a distance of 32 km from Leh International Airport, which is the nearest airstrip and well connected with major airports in India. From the airport you can take a taxi to reach the Ladakh Magnetic Hill located on the Leh-Kargil-Baltic National Highway.
By train: Nearest railhead is Jammutawi at a distance of 700 km from Leh Ladakh. Jammutawi is well connected with Delhi and other major Indian cities by railways. Cover the remaining distance can by a taxi.
By road: If you are traveling from Delhi, Manali-Leh highway makes for the easiest and the most convenient option to reach Leh. State transport buses and private buses frequently run from a magnetic hill in India, Himachal Pradesh to Leh Ladakh. Travellers also prefer to travel Manali to Leh (490 km) in their own vehicle.

Suggested Read: From Pune to Leh: Our Picture Perfect 9 Day Trip To Ladakh

Tip For Your Vacation

As the hill falls in the barren region 30 km far from Leh, don’t expect eating joints & hotels in the region. If at all you are that lucky, you might come across a few homestays which can make your places to visit in Leh Ladakh worthy and memorable. Therefore, stock enough snacks in your vehicle before you head for the Magnetic Hill in Ladakh.

Further Read: 11 Best Things To Do In Ladakh That You Can’t Afford To Miss!

Among the two primary suggestive theories – that of magnetic force in the hill and the illusion – there is no conclusive theory till date. But, there is certainly something mysterious about the magnetic hill in Ladakh! So think no further; plan a trip to Leh Ladakh and find it for yourself.

You will feel your car rolling uphill in total defiance of natural law. This attraction is an entirely natural phenomenon.

How far is magnetic hill from Leh?

Magnetic Hill is located at a distance of nearly 30 kilometers from Leh.

Where is magnetic mountain located?

Magnetic Hill is located at an altitude of 14,000 feet on the Leh-Kargil-Baltic National Highway in the Ladakh region.

How much does Magnetic Hill cost?

The surrounding slopes create an optical illusion of the hill at the site.

How do I get to Magnetic Hill?

You can take a taxi from Leh to reach Magnetic Hill.

A Detailed Post-Covid Travel Guide To Ladakh: Where Social Distancing Is Done Right

7 Secrets Of Ladakh That Only The Hills Whisper

Leh Ladakh Bike Trip 2021: Everything You Need To Know From The Scratch