8 Monuments In Hong Kong That Are An Epitome Of Architectural Perfection! 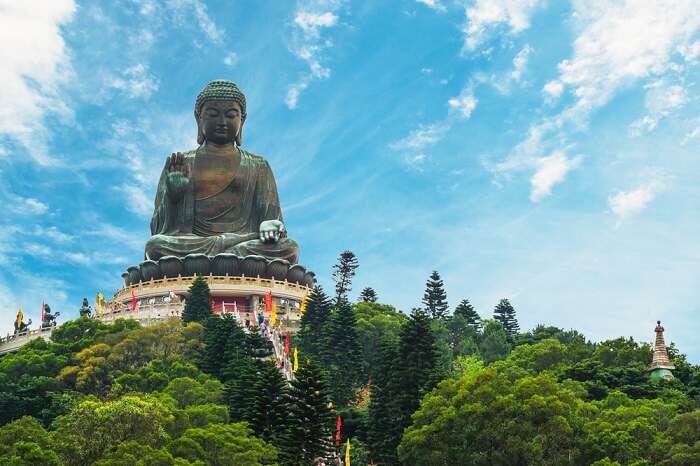 Hong Kong is very famous for its gigantic skyscrapers which are architectural wonders but there are many more buildings or monuments that are amazing and breathtaking. This place is a dream for all history enthusiasts and people who are fond of intricate architecture and man-made landmarks. Tourists that love historical monuments will fall in love with this place as there are plenty of places which are build to showcase the history and culture of Hong Kong in a beautiful way.

Take a look at some of the best monuments in Hong Kong that are a must visit by all the travelers alike on your next trip to this paradise.

This temple is officially a Taoist establishment but now it also holds some Buddhist and Confucian texts. Worshipers pray and come here to pay their respects or reflect on their sin as the shrine is known for answering prayers of devotees. Even though you dont believe in god, you must visit this temple as it has great architectural and cultural importance in Hong Kong. This temple is situated at the far north of Kowloon and is built in the architectural style that is famous for Chinese temples. Fortune telling is also performed in Wong Tai and is also known as kau cim where in a bamboo cup wooden sticks scripted with oracles are shaken.

Must Read: 10 Fun Things To Do In Tsuen Wan That Draw Travelers To Hong Kong

A large bronze statue of Buddha which was completed in the year 1993. To reach this religious icon you have to take a combination of bus and ferry or ferry and skyrail. It took several years to build this great monument with gold and bronze and when you see this gigantic statue you will know why. This monument is a symbol which shows the harmonious relationship of man and nature, people and faith. A popular tourist attraction and a major place of Buddhism in Hong Kong.

This place was found in 1906 and is a Buddhist Monastery. The shrine in this monastery is an impressive architectural structure and one of the most popular monuments in Hong Kong. A massive hall of ten thousand Buddhas is soon going to open here which will make this place even more magnificent. Initially this monastery was known as the Big Hut and renamed as Po Lin Monastery in 1924. Wooden bracelets are made here and sold near Tian Tan Buddha Statue which is also known as Big Buddha.

If you want to know more about the Hong Kongs pre-skyrise history then you must visit this museum. Settled in Tsuen Wan district this museum is a very well known monument and is named after its three beam floor plan. The Hakka walled village was declared as a historical monument in the 18th century and then transformed into a museum by Chan Chan. This museum was formed in 1980s and though most of the architectural monuments of this complex including the ancestral hall and stand alone houses that have traditional furnishing are stored there has been some changes brought to this place which includes a reception area and an exhibition hall.

Suggested Read: 13 Hong Kong Travel Tips That Will Come In Handy For First Time Travelers In 2022

Built in 1849 this church is the oldest church in Hong Kong. Also known as the mother church of the Anglican Diocese of Hong Kong. The close proximity to barracks is because this church was supposed to be used by the British army. After the war this church was restored and is known to be used as the Japanese clubhouse during the war. A great architectural piece and it has a gothic style which also includes stained windows that can be opened as it was built according to the tropical climate.

Suggested Read: These Hong Kong Airports Are So Lavish That You’d Never Want To Leave!

This Greek revival style monument was built from the year 1913 to 1914. The former building of Hong Kong Magistracy was demolished and this building was made. The walls here are made with massive granite blocks and this monument sits on a gigantic basement. The hugeness of the basement created many complications during the construction.

Suggested Read: 45 Most Delightful Tourist Places In Hong Kong On Your Trip In 2022

An interesting but not that popular temple in Hong Kong. Chinese sculptures and many murals around this place explain to you the great Chinese mythology and in a very simpler way. 18 levels of hell in this temple showcase the demons in a terrifying yet colorful way. This place is known for ancestral worship and also functions partly as a columbarium and shrine for spirit tablets.

This big blue house is a 1920s style building and is named after its bright blue exteriors. There are regular exhibitions and shows that exhibit the various stories of ancient Hong Kong and help the curious people know more about this wonderful city. This wel preserved architectural piece holds the culture and heritage of this city and also promotes the neighborhood. Wan Chai residents conduct regular tours around this majestic heritage and long walking tours are also given to many tourists. This building is also the citys first livelihood museum.

Enchanted by these monuments? Add these amazing structures on your next trip to Hong Kong and gear up to strike them off your bucket list.