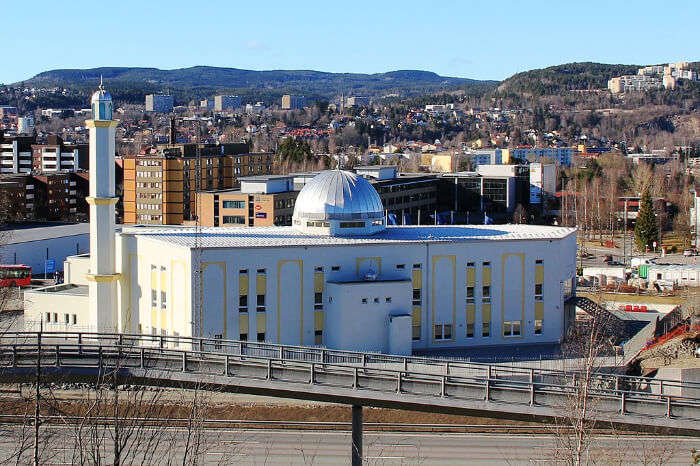 Norway is a place of diversity and openness. People following different religion are living happily together in Norway. Muslims in Norway are the second largest religious group in Norway after Christianity. According to some research, Norway has more than 5% of the total population is of Muslims and Islam is growing and becoming popular in Norway, although Islam is only a few decades old in Norway. Largest Muslim community in Norway has their roots to south Asia. There are a number of mosques in Norway that are popular not just among the locals but also the visitors from round the world.

Mosques in Norway are not just the symbol of religion but also of love, humanity, art and architecture. Here is our researched list of top mosques in Norway which shouldn’t be missed if you like going to Mosques and are visiting Norway soon:

This is one of the largest and perhaps most significant mosque of Norway. It is huge and amazingly beautiful. This splendid mosque is also the headquarters for World Islamic Mission in Norway. People here also know it as World Islamic Mission or simply WIM. This big mosque has room for more than seven hundred people. Mosques walls were specially designed and built from tiles imported from Spain and Iran. The walls has fascinating engravings related to teachings of Islam and inscriptions from Quran.

Adding again to its beauty this mosque has a huge exquisite chandelier from Turkey and a magnificent floor rug imported from Persia in the major prayer hall. The mosque is affiliated to Sunni traditions and is the biggest Sunni mosque in Norway.

Baitun Nasr mosque is the largest mosque in the country in terms of its capacity to accommodate visitors and any time it can have more than five thousand people in its campus. This mosque is also known as the Furuset mosque locally. Baitun Nasr mosque is situated in northeast of Oslo. To add to the beauty of this mosque has one grand dome and a dazzling minarat on the south side of the mosque. Mosque has a modern architecture with incredibly beautiful wall designs and decor.

This is one colossal mosque situated in Oslo. Mosque has been built by Pakistani community in Norway and is extremely popular among the south Asian immigrants and visitors to Norway. Mosque can accommodate more than two thousand five hundred people at once. This is a Sunni mosque and follows strong traditional affiliation with Sufism. A new building for the mosque was built in the year 2006 and is more than sixty seven thousand square feet big. This beautiful Mosque is one of the biggest in Norway.

This is both, a mosque and a cultural center in Oslo. This is one of the oldest mosque in Norway. It was opened for public in 1974. Both Muslims and Non-muslims are welcomed in this massive and splendid Islamic center which also acts as a teaching center for Islamic values, faith and traditions. Best part about this mosque is its comfortable connectivity and is very easy to reach.

Suggested Read: 9 Lakes In Norway Worth Exploring On Your Vacation To Europe

This is the largest mosque in the city of Bergen. This is beautiful mosque in a very serene locality close to residential areas. This mosque is very popular among the muslim community in Bergen and perhaps the biggest in the city of Bergen. Mosque has a separate section for females to pray. This cozy and warm ‘house of almighty’ has a very spiritual and homely vibe to it.

Mosque is situated in the town of Alesund. The mosque building is extremely cozy and peaceful. Mosque usually opens around noon time between Zuhu and Isha prayers for visitors. This is the biggest mosque in Alesund town. The medium of prayers at Alesund Jamii Islamic Center is Enghlish. There are also separate sessions for women.

Muslimsk samfunn-i Trondheim in the town of Trondheim is also known as MST locally here in Norway. Masjid has been built in a huge very beautiful old building. Building has an area of more than twenty five thousands square feets and is four floor big. Building of the mosque is old and was built in 18th century. Building was bought by MST and was converted into a mosque in the year 2003. Mosque is comfortably located in the center of Trondheim.

Further Read: Want To Visit Norway This Winter? This 2021 Guide Will Help You Plan Your Trip Well

People in Norway are extremely kind, very tolerant and perhaps more religious than other neighbouring countries. Majority of the mosques in Norway are in or very near to the residential localities and thus these also offer a great chance to interact and mingle with local people and take a deeper experience of the city. So, plan a trip to Norway , to visit these mosques and know more about its heritage and colourful accommodating culture.