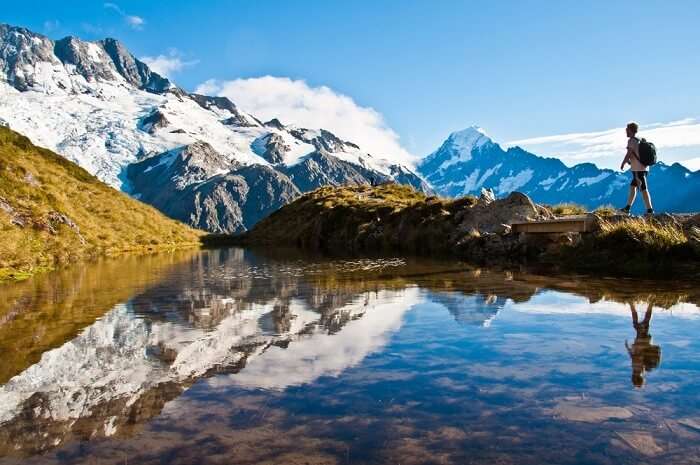 Our world is full of different landforms which make it quite diverse. Along with the plains, there are the majestic mountains that show us dreams. New Zealand is an island country situated in the south-western Pacific Ocean. Its size is compact but we can see its participation in many things. The country is well-known for its mountains, volcanoes and national parks. In the country, you can also see the cultural mixture between the Maori and the Europeans. Day by day the tourism is rising owing to its popularity.

So, here we will learn about some of the mesmerizing mountains in New Zealand that you may visit in your next trip.

Mount Taranaki also was known as Mount Egmont is an active stratovolcano present in New Zealand Taranaki region of the North Island. The mountain is 2,518 meters tall and the cone of it is one of the most symmetrical from all around the world. The mountain looks quite similar to Mount Fuji, so films like The Last Samurai has been shot here. You can visit the Egmont National Park if they want to visit this mountain. Different mountain climbing facilities are also provided by clubs for those people who have the capacity and experience to climb Mount Taranaki. The ski field present on the eastern slope of this mountain.

Mount Cook is the highest mountain in New Zealand. Its height is now 3,724 meters but it was higher in the past. The peak is a part of the Southern Alps situated in the South Island. This mountain is also regarded as the most dangerous mountain present in New Zealand. But mountaineers have always taken the challenge to climb this snow-covered peak. The mountain has three summits. It is a part of the Aoraki/Mount Cook National Park. Only the brave hearts try to climb the mountain but others can enjoy its view while visiting the National Park.

After visiting Aoraki you can move on to visit Mount Tasman which is the second highest peak of New Zealand. It rises to 3,497 and is situated in the Southern Alps, 4 KM from Aoraki. It sits in the South Island’s Main Divide between the Aoraki/Mount Cook National Park and Westland Tai Poutini National Park. You will get to view this mountain in the Canterbury region of the Aoraki/Mount Cook National Park. People who want to take up challenges do attempt to climb this mountain. If you are an experienced climber, then you can go on some of the expeditions organized to climb the mountain.

Suggested Read: 10 Interesting Things To Do In Nelson That Make This Town In New Zealand A Must Visit

This mountain is important to New Zealand as it is considered one of the most active volcanoes present in the world. The mountain is made from layers of lava and tetra. It is regarded as the secondary cone of Mount Tongariro and is present in the Central Plateau of the North Island. The elevation of this mountain is 2,291 meters. The Mangatepopo track is used to climb the mountain from its western side. Most climbers can climb this mountain quite easily. They should definitely use proper gears. So, check out this mountain if you want to see a volcano that still breathes.

If you love to ski, then this mountain range is going to be perfect for you. It is situated in Otago of the South Island. You will find this mountain range in the south-eastern shore of Lake Wakatipu and creates a beautiful backdrop for it. The highest point is the Double Cone peak which has a height of 2,319 meters. When you are in the ski field you can spot small lakes like Lake Alta. It is best to visit the place during winter as you can experience the Remarkables ski field. The ski fields have an elevation of 1,943 meters. Do visit the mountains to have an amazing view of them.

You will find this mountain in the Mount Aspiring National park situated in the Southern Alps present in the South Island. It has an elevation of 3033 meters and makes it the highest peak out of the Aoraki / Mount Cook in New Zealand. Seen from the Matukituki River it resembles a pyramid. Climbers choose the West Matukituki Valley to climb the mountain. There are different huts which form the staging points for these climbers. You need to have experience in climbing if you want to overcome this peak. Common people may visit the national park to see the spectacular view of this peak.

Mitre Peak in New Zealand is a well-known mountain that you will find in South Island. It is situated in the shore of Milford Sound which is a fiord and is a part of the Fiordland National Park. The peak is photographed quite often because of its distinctive shape when compared to the other islands. The elevation of the mountain is 1683 meter. You need to access the Milford Sound via State Highway 94. The mountain is very difficult to climb and most people should stay away from it. But if someone is visiting Milford Sound, you will get a good view of the mountain.

When in Mount Maunganui you can actually enjoy all the amenities of modern life. It is a suburb present in the north-east of Tauranga. This is a lava dome which is an extinct volcano. Its location by the ocean is very beautiful. People can easily climb it and tourists often do so to take pictures or have a stroll. Along with visiting the mountain you can also enjoy the beaches and reside in any well-known resort. The elevation of Mount Maunganui is 232 meters. In the local Maori language, the mountain is called Mauao which roughly translates to ‘caught by the morning sun’.

Suggested Read: Ski In New Zealand: 10 Places Every Adrenaline Junkie Must Visit At Least Once!

This mountain is yet another stratovolcano that is present at the end of the Taupo Volcanic Zone. This is the largest active volcano currently present in New Zealand. The mountain contains three major peaks which look spectacular when covered in snow. You can find major ski resorts at this mountain along with the only glaciers. The elevation is 2797 meters. A deep active crater is also present on this mountain. If you want to visit the ski fields, then you have the Whakapapa in the north and Turoa in the south. The season for these generally depends on the snow and weather. You should also visit the small glaciers along with the crater lake present on this mountain.

If you want to see a mountain that has been formed by continuous volcanic activities, then this is the perfect place. Whakaari is only the visible part of a submarine mountain. The elevation is 321 meter and is the most active cone volcano present in New Zealand. Guided tours are held on the island to show people around. To reach the place one needs to travel 48 KM from the eastern coast of the North Island. Tauranga and Whakatane are the nearest mainland towns. The journey via the boat is a spectacular sight when you will visit this mountain.

So, here are ten of the spectacular mountains that you will find in New Zealand. Just remain careful if you are attempting to climb any one of them as the weather may change in these islands quite drastically. But despite that make sure to tick off these nature’s retreat while taking a trip to New Zealand.