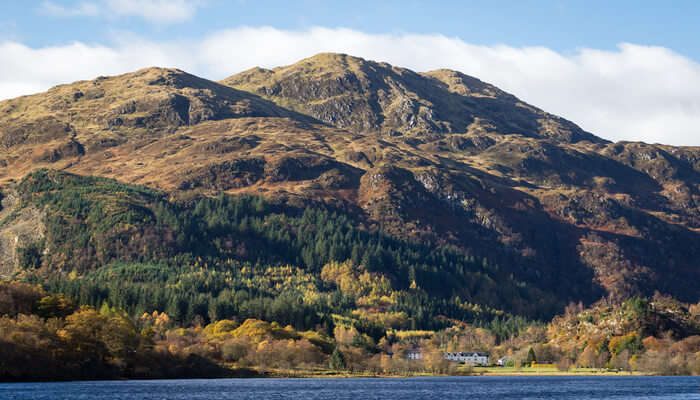 Scotland, the home of British Highlands, offers a wide variety of natural beauties like the United Kingdom’s highest mountains, the southern uplands, beautiful rivers, cities built over mountains, Munros, Glens and a lot more. It is a city with traditions and culture rooted so deep that you can see it in their festivals, food, music and of course, architecture. Scotland gives an image of a beautiful landscape that dances to the beat of its own wonderful culture and history. But is Scotland just about its mores and traditions? We don’t think so.

Image Source
In the Highlands of Scotland, at the head of the Glen Etive mountain is Buachaille Etive Mòr, commonly known as The Buachaille. The pyramidal design made it one of Scotland’s most identifiable mountains and the most featured on postcards and calendars. This range is surrounded by the beautiful Etive River, while the other four significant peaks make up the hill.

Must Read: 10 Festivals In Scotland To Witness In 2022 For An Exotic Dip In The Scottish Culture

Image Source
Ben Nevis is considered as the highest mountain in Scotland, standing at 1345 meters above sea level. It falls on the western side of the Grampian Ranges in the area of Lochaber of the Scottish Highlands. It is the most famous mountain in Scotland and gathers a lot of visitors for its scenic northern view.

Image Source
The Aonach Eagach is a rocky ridge in the Scottish Highlands on the north end of Glen Coe with two Munro peaks. The full ridge continues 10 km west to east on the Devil’s Staircase from the Pap of Glencoe. It is the longest stretch of mountains in Scotland and also one of the highest mountains in Scotland with a beauty that fills your belly with butterflies.

With a height of only 494 meters, the climb around this mountain is relatively straightforward and a bit lengthy. It has a fantastic view of the best mountains in Scotland. Right in the center of these mountain ranges lies the magnificent Lochan glen.

Image Source
Stac Pollaidh is a mountain in Scotland’s Northwest Highlands. The peak has a rugged plateau, with many pinnacles and deep grooves of Torridonian sandstone. It is elevated at 612 meters above the sea level and Stac’s rocky surface makes it one of the most challenging mountains in Scotland to climb.

Image Source
We can’t list the famous mountains In Scotland and not mention Ben A’an. Among the smaller hills in Scotland, Ben A’an is one of the most popular. The position in the heart of the Trossachs makes it a genuinely excellent lookout point, often known as the mountain in miniature. It is raised at 454 above the sea level; this mountain attracts a lot of commuters for its sunset view.

Image Source
Suilven, a Scottish mountain located in a remote region in western Sutherland is about 2 km in length and has a steep depression. It is a tall mountain with a height of 731 meters above the sea level, giving a fantastic view from the Inverpolly National Nature Reserve. It is one of the most challenging mountains to climb given that it is one of the biggest mountains in Scotland and in fact, the United Kingdom.

Image Source
In the mountains of Trossachs area of Scotland lies a gem called the Ben Venue. The ascent is a great walking distance from the summit, with both sweet and rocky terrain higher up the mountain. With a height of 729 meters above the sea level, Ben Venue is famous for its rich natural beauty that can be captured from Loch Venachar, Loch Achray, and Loch Katrine

Scotland is a land of mountains, some small and some big, but trekking on these mountains is heavenly and so divine in its presence. Most of these mountains in Scotland have fantastic valleys and widely spread ranges of plateaus that are surely worth making your friends envious of. The chilled breeze of life that runs through the depths of these mountains is surely enduring and charismatic to the skin and your soul. So what are you waiting for? Book your trip to Scotland with TravelTriangle to experience the magnificence.

What are the major mountain ranges in Scotland?

The Scottish Highlands, Central Lowlands, and the Southern Uplands are the major mountain ranges in Scotland.

What is a mountain called in Scotland?

How many mountains are there in Scotland?

Scotland has nine major mountains with a height of 4000 feet above the sea level and more than a hundred peaks above 3000 feet from the sea level.

Which is the most famous mountain in Scotland?

Ben Nevis, the highest mountain in Great Britain, is the most famous mountain in Scotland.

Which is the smallest Munro in Scotland?

Ben vane, of the Trossachs, is the smallest Munro in the famous mountains of Scotland.

Which is the most comfortable climbing Munro in Scotland?

The Cairnwell is the most comfortable climbing Munro in the mountains of Scotland.

When is the best time to visit Scotland?

During spring ( March to May ) and autumn ( September to November) are the two best times to visit Scotland because the weather is sunny and comfortable and the mountains are easier to climb during this time.

Mountains In Thailand Hiking In Azerbaijan Trekking in Norway

Top 10 Villages In Scotland That You Must Visit In 2022

25 Most Romantic Places To Visit In Los Angeles: Romanticize, Relish, And Revisit In 2022!