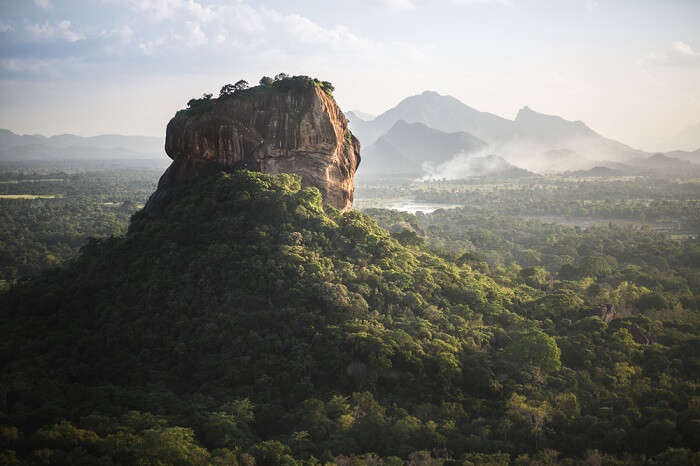 Sri Lanka is well known all over the world for its beautiful mountains and the scenic beauty that comes as a plus with it. The central and southern parts of the country are dotted with a lot of rugged mountains and peaks. These places are of high ecological value and are biologically diverse. The mountains of Sri Lanka have well-preserved forest areas and they also form the origin of a lot of rivers in the country. The Sri Pada Mountain of Sri Lanka is the holy peak to which pilgrims from across the world visit to worship the footprint of Lord Buddha. This country is also home to many waterfalls and is famous worldwide for its tea plantations.

The weather conditions of this country are almost stable throughout the year with low temperatures. Huge mountains covered in lush greenery and occasionally marked by waterfalls are the features of the country that make it starkly beautiful. Sri Lankan towns such as Nuwara Eliya with their majestic sightseeing opportunities and mountains in Sri Lanka are what makes the country remarkable.

The weather of Sri Lanka is very complicated because of the fact that this small island country is affected by two monsoons. Due to which it becomes very essential to keep in mind the time of the year and the prevailing weather conditions before you plan your trip to Sri Lanka. However, you can visit the country and there is always good weather in at least one part of it.
The early months of January to March make the best time of the year to visit this country. These months have the most of sunlight making it soothing, warm and perfect for traveling. Temperatures in the higher altitudes are much lower compared to the dry and sunny beaches on the south and west of Sri Lanka.

There are numerous mountains in Sri Lanka that not only takes away the breath of travelers but also satiate the thirst of adventure amidst the thrill seekers. Take a look at this list of top mountains that one should definitely conquer when traveling to the Pearl of the Indian Ocean, Sri Lanka.

As said earlier, the Sri Pada of Sri Lanka is well known for its Buddhist pilgrimage. Sri Pada or the sacred footprint is a 1.8-meter rock formation near the summit of Adam’s Peak which is at an altitude of 2,243 meters. This mountain is the junction of a bunch of religions such as Buddhism: who consider it to be the footprint of Buddha, Hindus believe it to be the footprint of Lord Shiva. In Islam and Christianity, this footprint is considered to be that of Adam or Saint Thomas. Adam’s Peak is one of the most beautiful mountains in Sri Lanka and is located in the Ratnapura district on the edge of the central massif. The surrounding group of mountains in this region is known as Wilderness of the Peak and is extensive when compared to the bulk of other mountains.

The second highest mountain of Sri Lanka, Kirigalpotta has an altitude of 2,388 meters above the mean sea level. This is also the highest mountain of Sri Lanka which is easily accessible to the common civilians of the nation. Pidurutalagala, on the other hand, is a region of the military base and thus, is not accessible to the public. The peak of Kirigalpotta is located in the Nuwara Eliya district. A 7-kilometer hiking trail which is not very well known leads you to the mountain summit through the Horton Plains National Park. The trail, however, is a splendid adventure for hiking mountains in Sri Lanka.

Pidurutalagala is the only ultra prominent peak of this island country. This also happens to be one of the only 1,515 ultra prominent peaks all across the globe. This mountain has a forest reserve in the surrounding location which was subjected to severe damage, five years ago in a forest fire. The fire had caused a loss of more than three acres of forest land. However, with time and the help of the people of Sri Lanka, a lot of the damage has been repaired and is still improving every day. The mountain summit of Pidurutalagala acts as a base of the communications array of the Sri Lankan government and armed forces. It is marked as an ultra-high-security zone due to the confidentiality of the activities in the region. These are the best mountains in Sri Lanka in contrast to the lush green surroundings, consisting of forests with a large variety of rare and endemic species of plants and animals. The mountain summit gives one the chance to have a glance at the beautiful country of Sri Lanka and is a perfect panorama.

Suggested Read: 15 Romantic Beach Resorts In Sri Lanka To Melt Your Hearts Away In 2019

Thotupola mountain in Sri Lanka is one of the highest-ranking mountains amongst the top ten of the list. This takes around a half day of the journey for climbing and sightseeing. The flora of this region is a contrast to the rest of the mountains of the country. The top of the mountain is the best catch you can get if you have a thing for mountainous greenery. The Thotupola Kanda is one of Sri Lanka’s most famous and beautiful mountains and also happens to have a historical connection to King Ravana Era.

Rare species of birds are frequent in this part of the country, they include the likes of Dull Blue Flycatcher, Sri Lanka White Thrush and many more. The rare Horned Lizard is very common around the Horton Plains and you might even catch a glance of a leopard if you’re lucky enough.

This is commonly referred to as Rajagala Aliso or Rajagalathenna, meaning ‘The Monarchs Rock. Rassagala is a rugged mountain which is heavily forested and has an altitude of 1,038 feet above he mean sea level. This is located in the sparsely populated Eastern province of the country, having an important archeological value. The Rajagala archeological site spreads across 1,600 acres and is the second largest of its kind, the first being the Mihintale monastery in Anuradhapura. This place consists of above six hundred prehistoric ruins, monuments, and artifacts, out of which one could find hundreds of stupas.

Conical Hill is yet another stunning beauty of the Sri Lankan island. The location of this mountain has been unexplored by hikers for decades and has been recently found out. Hiking this mountain might be a little difficult because of the absence of properly figured out roads leading up, but if you are convinced enough you can use the trails used by the wild animals of the region. This region also witnesses the presence of a huge type of wasp, which further makes this a difficult place to explore.

The Great mountain at an altitude of approximately 2,212 meters above the mean sea level happens to be the sixth highest mountain in the country. This is another remarkable mountain situated in Nuwara Eliya district of central Sri Lanka. The location gives the mountain the advantage of a picturesque setting. Traveling by train allows one to view this mountain with a span of 1 kilometer between Thalawakele and Nanuoya. It is a climbing mountain in Sri Lanka which is accessible from the ends. However, it is considered to be one of the most difficult summits because of the steep and sharp terrain.

The Bible Rock is located near Aranayake islands near the Kegalle district in the central province of Sri Lanka. It is known as the Bathalegala in the Sinhala language and the name Bible Rock is due to the fact that the surface of this terrain resembles that of a book. It has a remarkably flat surface resembling the more famous Sigiriya citadel towards the north of it.

The Gombaniya range is located in the Matale district of the country. The range consists of five peaks resembling the knuckles of a closed fist and thus, are also known as the Knuckles range. The highest point of this range is at an altitude of 6,248 feet above the mean sea level. The five peaks of the Gombaniya range from West to Southeast are Kirigalpotta, Gombaniya, Knuckles, Koboneelagala and Dotulugala: also known as the Mini Alps. This mountain range has a span of approximately 20,000 hectares of land. It houses a biodiversity of indigenous flora and fauna of the Indian subcontinent, making it a must visit on your trip to Sri Lanka.

Further Read: 9 Alluring Things To Do In Nuwara Eliya, The Heart Of Sri Lanka!

Sri Lanka has a unique geographical location that puts it at an advantage with all the greenery that this land has to offer. With hidden waterfalls here and there in the amazing mountains in Sri Lanka , this is definitely a lifetime experience.

Q. How many mountains are in Sri Lanka?

A. The mountains of Sri Lanka exhibit some of the most surreal and mesmerizing views, allowing a visitor to witness the beauty of the Pearl of the Indian Ocean at a glance. There are around 19 mountains in Sri Lanka that attracts tourists all year long.


Q. Which is the highest mountain in Sri Lanka?


A. Pidurutalagala is the highest mountain is Sri Lanka standing at the height of 2,500 above the sea level, making hiking and trekking even more adventurous for thrill seekers.


Q. Which hill is situated in Sri Lanka?

A. Sri Lanka is home to the famous Conical Hill that is 2,166 metres high and is located in the Nuwara Eliya District of Sri Lanka.


Q. What is the highest plateau in Sri Lanka?

A. The highest plateu in Sri Lanka is located in 32 kilometers from Nuwara Eliya on the highlands of the central province and is called Horton Plains.

15 Spectacular Places To Visit In Galle And Around In 2020 To Witness The Best Of This Historic City!

38 Best Places To Visit In Colombo In 2020 That Will Spice Up Your Sri Lankan Sojourn!

Sri Lanka Travel Tips: 21 Dos And Don’ts For A Memorable Vacation In 2020

5 Best Places To Visit In Sri Lanka In October Which One Must Visit In 2020!