8 Museums In Barcelona Which Will Take You On A Heritage Walk Of The City’s Past! 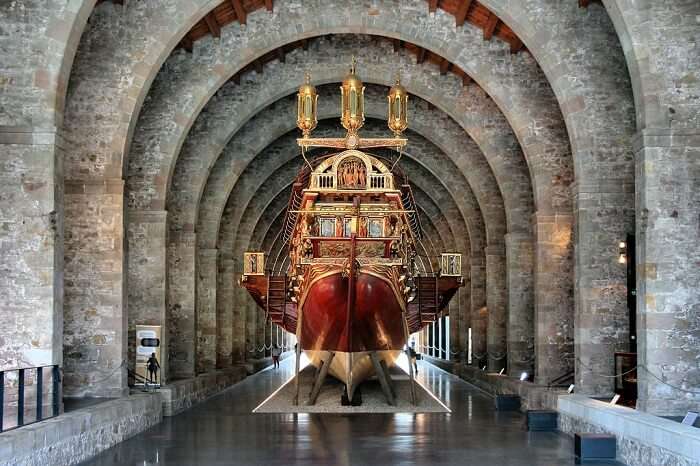 Barcelona, the capital city of Spain is rich with culture and is known for its art and architecture, it houses around 55 museums which cover various topics ranging from art, history, culture to sports, science, war and so on.

Also called Museu Picasso houses within one of the largest collections of artwork by Pablo Picasso with over 4,251 works by the artist. The museum was opened on 9th March 1963 on Montcada Street and was the first museum dedicated to Pablo Picasso. It is a paradise for the art lovers who are looking for a inspiration for their artistic skills.

Must Read: A Guide To Barcelona In March: A Traveller’s Paradise

This museum which is located in Plaça dels Àngels, in El Raval, Ciutat Vella was opened on November 28th 1995 though at the time of construction it had no collection to showcase but now has a permanent collection of around 5000 works dating from the mid-20th century, the museum also has a study centre, library reading room, special collections room where the public has free access to the books, archives and publications collections, they also offer lectures, seminars, tours and more educative activities.

This museum is located in the Gothic Quarter of Barcelona city and has been around since the Roman times, it manages several historical sites around the city like a royal palace called Palau Reial Major, Spanish air raid shelters, Jewish quarters etc. A guided tour will take you around showcasing various aspects of Roman and Spanish history.

This Dali museum in Barcelona Spain is located in Dali’s hometown of Figueres and the artist himself is buried in a crypt below the stage, it was opened on 28th September 1974 and showcases the largest collection of work by Dali including sculptures, mechanical device, a three-dimensional anamorphic living room and much more.

Suggested Read: 15 Best Things To Do In Barcelona That Are Enough To Relish The Real Taste Of Spain!

One of the greatest museum buildings which opened on 10th June 1975 and was designed by Josep Lluis Sert and Miró himself so that the architecture and art intertwine. The building is white, airy and very minimalistic and houses a massive collection of Joan Miró’s artwork and graphic design.

This cultural centre and museum is located in Carrer d’Aragó in Barcelona and houses Antoni Tapies work who was one of the most prominent artists especially in the 1950’s and 50’s due to his use of mud, paper and rags in his works. This museum houses one of the most complete work of the artists and holds, lectures, symposia, film sessions and more, the museum opened in 1984 and is easily recognizable with its tangle of metal netting and aluminium piping which is a work called Cloud and Chair.

This is a family friendly science museum which is located in Barcelona and was formerly known as Science Museum of Barcelona, this museum was established in 1981 but was renovated and opened again in 2004, it houses various exhibitions along with a 3D planetarium, a scaled version of the solar system, a flooded forest where tourists can experience the wet and dry environment of the amazon forest, place where you can touch various plants and animals etc.
Timings: 10am-8pm (Daily)

This museum located in the building of Drassanes Reials de Barcelona at the end of Las Ramblas which was dedicated to ship building. This museum houses a collection of ships and boats and has an exhibition on how medieval sailing ships were constructed, you can even book a coastal tour on the Golondrinas and the Goleta Karya.
Timings: 10am – 8pm (Tuesdays to Sunday) and closed on Mondays

Further Read: Celebrate Christmas In Barcelona For An Amazing Insight Into The Spanish Traditions

If you are crazy about exploring the history of a place, then these museums are waiting to be explored. So, don’t just sit rather plan your exotic Spain vacation with TravelTriangle and take a heritage walk to these heritage abodes.