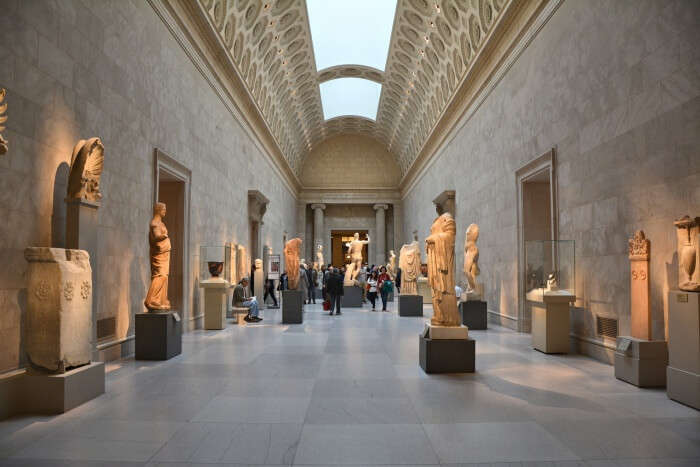 Greece, a nation which is considered as a country which gave birth to the human civilization. So when you are in Greece don’t forget to visit the museums which showcase the vast history of this great nation. Visit any of the museums in Greece and investigate the arks of human workmanship and inventiveness. Get very close with extremely valuable exhibitions. Admire the portrayals of divine beings and individuals. Get to know about the regular things of the ancient peoples private and social lives. Inundate yourself in the excellence and charm of human workmanship.

Image Source
Give yourself a chance to be enticed to enter the wonderful universe of antiquated Athens and appreciate each invaluable curio that has been found on the hallowed rock of Acropolis-the momentous of Ancient Greece – spreading over a period from the ‘Mycenaean’ all the way to the ‘Roman’ and ‘Early Christian Athens’. The finds are displayed in an astounding building – a center of attraction in itself– whose structure has really been directed by the site itself. It is fairly amazing that the Museum, located relatively opposite Acropolis, is a staggered structure around a solid center that has indistinguishable measurements just as the boundary of Parthenon, though the visit inside the museum in a way bears a resemblance to the scaling the Acropolis rock. The Acropolis museum has been awarded as the ‘best museum in the world’ by the ‘British Guild of Travel Writers’.

If you are searching for museums in Athens, Greece then the ‘National Archaeological Museum’ is one such museum that you must visit. The National Archeological Museum is the biggest museum in Greece and a captivating one! Despite the fact that the first reason for existing was for the museum to keep all 19th-century excavation finds from within and around Athens, it slowly turned into the vital National Archeological Museum and was enhanced with finds from all over Greece. The rich accumulations in the exhibition, involving in excess of 11,000 displays, give a scene of Greek human progress from the beginning of Prehistory to Late Antiquity. The principal feature of the exhibition hall is the prestigious ‘Antikythera’ device, a logical instrument from the first century B.C which was utilized for calendric and galactic figuring. So, if you are looking for a museum of ancient Greek technology then you are the right museum.

The Archeological Museum of Delphi is a standout amongst the most essential in Greece since it displays the historical backdrop of the Delphic preserve, site of the most renowned antiquated Greek prophecy. Its rich accumulations include basically architectural figures and statues given to the museum mirroring its political, religious, and creative actions from its initial years in the eighth century BC to its decrease in Late Antiquity. The ‘Archeological Museum of Delphi’ centers around the historical backdrop of the Delphic asylum and prophecy, covering quite a wide range from ancient times to Late Antiquity. The displays are exhibited in a sequence and by circumstance: Sanctuary of Pronaia, Votive pit of the Sacred Way, Temple of Apollo, Siphnian Treasury. These gatherings are a piece of bigger presentation units, which enable the guest to comprehend the times of flourishing and decay of the sanctuary.

Image Source
The Herakleion Archeological Museum is one of the biggest and most imperative historical centers in Greece; including remarkable displays of Minoan craftsmanship, it is considered as the exhibition hall of Minoan culture second to none around the world. It houses delegate antiquities from every one of the times of Cretan ancient times and history, covering a period length of more than 5,500 years from the Neolithic time frame to the Roman occasions. The presentation incorporates interesting works of Cretan craftsmanship, found in unearthing over the eastern and central part of the island, which generally length 5500 years, from the Neolithic to the Late Roman time frames. Most protests date to ancient occasions and to the alleged Minoan time frame, named after the island’s legendary lord, Minos. It is a well know Greek mythology museum.

5. Palace of the Grand Master

The great royal residence of the Grand Master is situated at the summit of the Castle of the Knights, toward the termination of the Street of the Knights- an extraordinary street compared to other maintained stone cemented medieval lanes in Europe. The castle was first constructed by the Knights of St John of Jerusalem on the site of the seventh century. Byzantine stronghold so as to be the official habitation of the Grand Master of their order. Aside from being a castle, it was additionally an authoritative central point of the administration of the Knights and an essential fortification. In the museum, you will witness mosaic floors of antiquated Byzantine and Roman Art, an astounding furniture accumulation of Western Art of the sixteenth and seventeenth century; sumptuous rooms outfitted with excellent furniture, oriental vases, statues, rugs, artistic creations and so forth. The inside plot is embellished with numerous statues of the Roman and Greek period.

The ‘Museum of Byzantine Culture’ was opened in 1994. It was built up with the point of making it a center in which parts of Byzantine culture enduring in Macedonia and Thessaloniki specifically might be kept, explored, and examined. The historical center has accumulations of the figure, paintings, medleys, icons, and engravings from the Byzantine time frame. It has perpetual shows, spaces for transitory topical presentations, protection workshops, and storerooms. The displays incorporate statues, wall artistic creations, mosaic floors, icons, metalwork, coins, engravings, dishes, and ceramics. Right now, three permanent presentations are open, exhibiting parts of the social culture and the craft of the Early Christian time frame with accentuation on the progress from the antiquated world to Christianity.

Image Source
The Archeological Museum of Olympia unfurls the historical backdrop of the sanctuary of Zeus and its praised amusements. The gallery was established in the nineteenth century to house the finds that the unearthing in Olympia always uncovered. Nonetheless, as a developing abundance of ancient rarities continued aggregating, even following a century-long archeological research, and because of the high seismicity of the territory, it ended up clear that the exquisite nineteenth-century building would not get the job done. The new gallery of Olympia was worked in the decade 1966-1975 and from that point forward it experienced a noteworthy rearrangement of its presentation zones in 2004, in perspective of the Olympic Games held in Athens.

Today, the historical center’s perpetual accumulations traverse 3,500 years of history, from around the 3500 years of past when people previously settled in Olympia to the nightfall of Zeus’ asylum in the seventh century AD.

The Museum of Prehistoric Thera houses finds from the unearthing at Akrotiri, led under the protection of the Archeological Society at Athens, the German Archeological Institute unearthing at Potamos, the saving unearthing at different destinations on the island, did by the 21st Ephorate of Prehistoric and Classical Antiquities, and also findings found serendipitously or gave over. Famous for its figures and for its gathering of old Greek bronzes, which is the most extravagant on the planet, it’s a given that the museum is positioned among the most essential historical museums in Greece.

We have only heard or read about the legends and the history. These museums in Greece are the only source where we will get a chance to see what we have heard or read. Seeing these prehistoric sculptures will fill you with a feeling of unparalleled awe. So don’t forget to visit these museums on your trip to Greece.