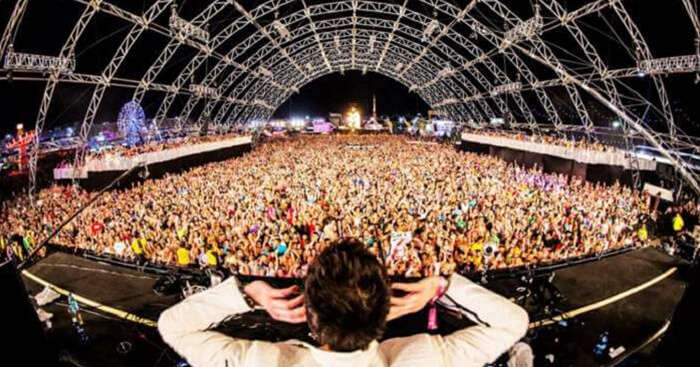 Hills lure with romantic landscape and beautiful weather. Add in some music, company of friends and intoxicating party mood, and the resulting scene is as good as it gets. Music festivals in hill stations of India picked up quickly with the party-loving youngsters.

Spread in different corners of the country, the audience are usually a mix of urban Indian youth and a few foreign travelers. If you are yet to attend one of these sizzling music festivals in hill stations of India, here’s all you need to know about them. Starting December, we list all major music fests of the hills.

Image Source
The Hornbill festival touches the traditional nerve of the North-East. The tribal people celebrate it with great euphoria. It is a week-long gala that amalgamates crafts display, sports, Naga folk music, traditional dance performances and a lot more, all under one shade. Hornbill Festival is held at Naga Heritage Village, Kisama which is about 12 km from Kohima, the capital of Nagaland.

Image Source
Enchanted Valley Carnival is reminiscent of the remix era. DJs from all around the world get together to entertain their audience. It is called the ‘Baap of Fusion’ and is one of our recommended fests too. This year, famous artists like Ferry Corsten, Alex Morph, Tiesto and Fatboy Slim are expected to be part of this pilgrim of music preachers.

Image Source
Sulafest is actually called the Gourmet Music Festival of India. Along with the melody that soothes your ears, your taste buds are also enchanted by exquisite dishes. The two-day event carries irresistible performances of rock, folk, electronic, blues and reggae music performances. The idyllic amphitheater is like icing on the cake which further soothes the whole domain. Artists like Christ Burstein, Lucky Ali, Raimund and Steve Rachmad are lined up for 2016

Image Source
The festivals calls music fans with a varied taste. The scale deviates from jazz to rock, dance to films, and sports to fastidious cuisine. This all happens in awe-inspiring Himalayan ranges in the backdrop which is just unbelievable. The festival is a two-day long program that is organised in the month of March. Raghu Dixit was the centre of attraction for the last year’s fiesta.

Image Source
Rock music lovers will be happy to hear the raising bands performing in their full swings. The gala is organized in April, during the Easter weekend. It is a two day program where around 9-10 bands show their love for music. The show gives a chance to upcoming talent to perform on a big platform.

To book tickets mail to: dolly.malvai@genesis-foundation.net

Image Source
This is the only festival that still believes in ‘blues’. According to the organizers, blues is a genre that cannot be faked. The festival shows its colors in summers, the perfect time to escape to the hills. Foot-tapping and head banging music in the backdrop of Dehradun and Shivalik hills is something to die for! With such a variety of artists like Rangeela, Prateek Kuhad, Mame Khan Manganiyar and Aryan Samuel it actually proved its glory.

To book tickets mail to: bigggigfest@gmail.com

Image Source
It is an open conclave of air arts and music at diverse virgin locations. People from varied places perform together on same podium, allowing them to discover their true talent. The mingling of cultural, traditional and modern values through music is worth watching. September is the month for this blast.

Image Source
Pothead started this creative festival that brings art and music together. The variety of bands, painters, tattoo artists, potters, graffiti are featured in this festival. This carnival is a jam of jazz, rock and electronic music. This year the music fest was organized in September with famous performers like Skinny Alley, Captains of Hook, Street Stories and Scribe.

Image Source
Held in the Parvati Valley, Parvati Peaking Festival is the biggest trance festival in India. It commenced  just two years ago, but the magic of splendid mountains and soulful trance swept music lovers off their feet. This year’s lineup, including Skrillex and MIJA will make you groove for sure.

Image Source
Saying hey to rock music lovers, this could be an experience you want to add to your cart. The festival includes stellar acts from all around the world. The founders of SONIC YOUTH-USA, Sky Rabbit, Sulk Station, Guru Rewben are some of the famous musicians who have rocked the stage so far. The four day festival at a picturesque location with superb music mopes you completely!

The beautiful hills playing music around might have taken your breath away. Don’t just paint images in your mind hop on to buy tickets now!

Which are the classical music festivals in India?

Which are the upcoming music festivals in India in December?

Which are the best places to attend music festivals in hill stations?

Manali, Kasauli, and Mussoorie are popular hill stations that organize music festivals every year. They are organized at the backdrop of mountains and scenic landscapes.

Which are the most popular music festivals conducted in the hill stations?

What is special about the Shiva Squad Music Festival in Manali?

What is unique about Parvati Valley music festival in Kullu?

These music festivals are popular for trance music in the backdrop of scenic mountains and beautiful landscapes.

Which is the best fusion music festival?

Enchanted Valley Carnival at Aamby Valley in Pune is the best fusion festival that plays music from Djs and artists around the world like DJ Tiesto, Fatboy Slim, Alex Morph, and more.

Which is the best music festival for Blues music?

The Big Gig is a music festival organized at Landour in Uttarakhand and has upcoming musicians from the Blues music genre.

Which is a family-friendly music festival?

Music festivals conducted at Kasauli are family-friendly. People of all age groups can enjoy music at these music festivals.

Which music festival is conducted at the Nilgiris in Tamil Nadu?

GOMAD is the music festival conducted every year at Ooty where you can also enjoy camping.

Which is the best EDM music festival organized at a hill station?

The Himalayan Music Festival is organized at Dharamshala. It is the best EDM music festival you can attend against a breathtaking view of the snow capped Himalayas.

Durga Puja In Kolkata 2021: A Guide To Feel The Joy Of This Festival