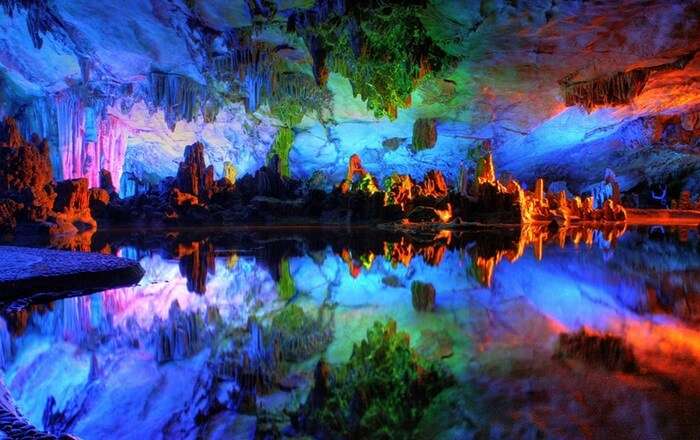 The Earth never ceases to amaze us. The intricate geographies, diverse climatic conditions, and the natural peculiarities of the corners of the world make us wonder and seek an explanation. From hell to the heavens across the globe, the mysterious places that follow are just as surprising. So sit back and be astounded by these 11 mysterious places around the world.

Image Source
It is natural gas field that collapsed in 1971. To contain the spread of the Methane gas, geologists set it on fire and it has been continuously burning ever since.

Image Source
The geyser, only 5 feet tall, was created by well digging in 1964 to explore sources of geothermal energy.

Image Source
Initially thought as a meteorite impact structure, it is now thought to be merely an uplift laid bare due to erosion. Though, no conclusive studies exist.

Image Source
The small cave at the base of the waterfall emits natural gas that can be lit to produce a small flame and extinguished easily. Once lit, the flame can go on up to one year, unless extinguished by force.

Image Source
The world’s largest salt flat was formed when a prehistoric lake went dry. A thin film of water gathers on the salt surface and gives the mirror-like reflecting surface.

Image Source
It is a natural limestone cave with multi-colored lighting. But the reason behind the colred lighting is still a mystery.

Suggested Read: 10 Most Expensive Islands In The World

Image Source
It is a perfectly multi-hued, twisting-and-turning-slot canyon. It was formed due to the flowing water bodies and subaerial processes.

The slot canyon was formed by erosion of Navajo sandstone due to flash flooding and subaerial processes.

The cave, famous for its natural acoustics, was formed due to contraction and fracturing due to differential heating and cooling on the surfaces of solidified lava.

Image Source
The colored mountains were formed due to the natural weathering and erosion of the red sandstone and conglomerate laid down by sedimentation from lakes and streams in the region.

Image Source
The ice caves at Skaftafell are only found in winters when the glacier river retracts and the water freezes.

So, did these places leave you surprised by their mystical appearances? Let us know the place that was, according to you, totally out of this world.

Q. What is the Door to Hell?

A. The Door to Hell is a large crater of natural gas field that has been burning for a very long time. It is believed that a Soviet oil rig fell into the crater in 1971 and geologists put the rig into fire.

Q. How much does it cost to go to Antelope Canyon?

A. A trip to the Antelope Canyon will cost around $25 and the Navajo Parks fee of around $8. Travelers can take a tour of the Upper Antelope Canyon which will take around an hour. A night photography tour is also available which costs somewhere around $208.

A. Yes, travelers can now visit the Fly Geyser as the attraction is now included in the ticketed nature walks. Travelers can click pictures and see the rocks form at a distance while on these walks.

Q. Where is the eternal flame?

A. The Eternal Flame Falls features a small natural gas flame that can be found behind the waterfall. The flame is located in the Chestnut Ridge Park in Western New York, United States.

Q. How long of a hike is Kanarraville Falls?

A. The total distance travelers need to hike for approximately 4.5 miles. The hike will take around 4-5 hours.

Q. How can travelers get to skaftafell?

A. Travelers can get to skaftafell by car and it will take around 4 hours to reach the destination.

Visit These Most Dangerous Places In The World That Are Not For The Faint-Hearted In 2021!

17 Epic 7 Star Hotels In The World That Make For An Experience Like Never Before In 2021!