20 Weird, Strange Islands Of The World You Should Visit In 2021 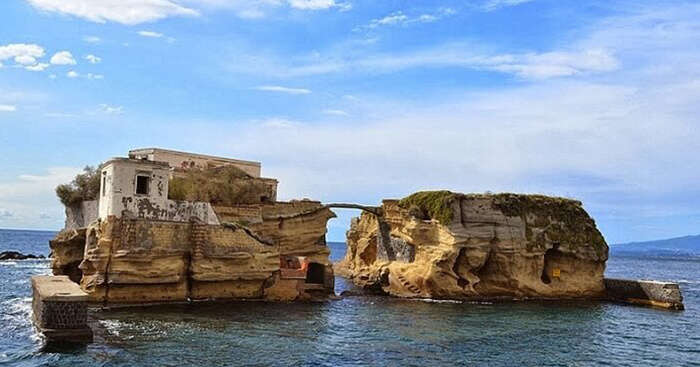 Islands are cute little havens, surrounded by water with picturesque landscapes, and greenery; sometimes flaunting kaleidoscopic fauna, sometimes mesmerizing with their quiet and peace. Wondering what can be strange about them?

Well, you can’t be more wrong! There are many strange islands of the world that will make you question your idea of the picture perfect islands. The following islands are simply strange. They offer desolation and goosebumps. Let’s scroll, buddy.

Top 20 Strange Islands Of The World

We have created a list of the top strange islands of the world you should visit in 2021. Have a look and see which one these steal the show for you.

Littered all over the island, there are 887 strange statues, over 3 stories tall, famous as Moia statues. And they weigh crazy 14 tons and measure huge 13 feet! Strange is the question of how did early Polynesian inhabitants accomplish such monumental task with their fairly primitive tools. They had no carriages or cranes to pick and drop the large stones out of which the statues are carved.

There is no answer though.

Must Read: 25 Most Haunted Places In The World

Ohk, think of venom, so powerful that its single drop is capable of melting human flesh. Now think of a snake which is full of such venom. Now, about an island full of just these snakes.

Scary, right? Yes, Snake island is full of 5000 Golden Lanceheads, one of the most dangerous and venomous snakes in the world. These snakes slurp and surf the island like kings as they are the sole inhabitants of the island, sparing a tourist or two, here and there.

Suggested Read:
10 Most Alluring Homestays in Japan That Define Japanese Hospitability At Its Best!

Just a glance at its pictures, showcasing its biologically unique to the world flora and fauna, says a lot. Just for the record, there are over 300 plants, 27 reptiles and six bird species which are unique to this island. And trust, the pictures below are not out of AVATAR.

Suggested Read: 20 Mysterious Places In India To Visit In 2021 More Bizarre Than The Bermuda Triangle

The beautiful island, lined with picturesque cobblestone streets, is said to be cursed. Actually, a set of two islands linked together with a rusty bridge, the island is said to bring extreme bad luck to its owners; sometimes, even resulting in untimely deaths. Sudden suicides, heart attacks, brutal murders, commitment to mental hospitals, downfall from the riches, or being overthrown in jail.

This strange island of the world was once home to several poisonous gas factories. Now it has transformed to a rabbit hub with thousands and thousands of rabbits hopping on the island. Some believe them to be the descendants of the group which was brought there to test poisonous gases. While others claim them to be somehow descended from the heaven to pay homage to the original lot. Quite strange, eh?

Suggested Read: A 2021 Compilation Of 50 Weirdest Places Across the World You Should Stop By

Also known as “The Graveyard of the Atlantic”, Sable Island houses multitudes of shipwrecks and hundreds of wild horses. The peculiar eeriness of over 490 dilapidated shipwrecks adorning the island while more than 450 wild horses gallop around, is definitely not lost on us.

Suggested Read: 33 Best Places To Visit In Japan That Make It Look Right Out Of A Storybook In 2021!

The picture is tainted with tragic deaths, bizarre happenings, pirate attacks, buried treasure, secret military use, cursed land, and gruesome murders. All these strange happenings have forced even the best of rationalists to wonder about the curse being true.

Suggested Read: Haunted Places In Austin: Try Not To Skip A Heartbeat At These 10 Most Spooky Spots

8. La Isla de las Muñecas or The Island of the Dolls, Mexico City

The former resident of the island, Don Julian, used to claim that a little girl had drowned in the back canals of the island, whom he failed to save. Since that day, various dolls and dismantled body parts of dolls started washing ashore to the island.

Now now, thousands of dolls, hanging from trees or various objects, some mangled, some wrapped in cobwebs, some with body parts missing, some just beheaded!

Got it? Or do you need to go through it once again?

Suggested Read: 14 Strange and Unconventional Retreats For The Ultimate Wanderer

The island is named so, as it was discovered on Christmas day in 1643. Populating the island are 14 species of crabs, who scramble to leave their inland burrows during the rainy season to spawn in the sea. Nearly 140 million crabs make this month long treacherous five mile journey to the ocean, albeit all the hurdles of dehydration, dangerous plains, squashing under the vehicles and crazy herds of yellow ants.

These floating man made islands are quite strange and wondrous in their own way. They are indeed woven mats made out of floating totora reeds which are fastened together with ropes. Locals use these islands as settlements to avoid disruptions with neighboring tribes regarding the territories.

Now this doesn’t qualify as an island until you consider the size of this garbage patch. It measures to be twice the size of whole continental US. And what makes it more strange and sad is that it is made up of debris and particles that have been dumped in the water over the years. All of which have come together by the oceans strong currents and high waves. Strangeness to its height.

Suggested Read: 8 Haunted Places In Arizona That No One Even Dares To Talk About

Also known as “Cat Island”, this small island in Japan has barely 100 human residents but a large number of cat population. In order to keep the mouse population under control, it is believed that the cats were introduced in the 1850s. If you plan on visiting the island, make sure you stay in a cat-like cabin for a different experience altogether. It is available for overnight stays between April and November.

One of the American Thousand Islands, Deer island lies in the town of Alexandria, close to Alexandria Bay in New York. It majorly looks like any old island. Here, you can find the infamous Skull and Bones undergraduate secret society of Yale University. And to your surprise, many former politicians and presidents were members.

Suggested Read: 6 Haunted Places In Kashmir That You Should Not Visit Even In The Daylight

Located in the Central Pacific Ocean, Howland Island is an uninhabited coral island. This strange islands of the world is perhaps best known where Amelia Earhart was supposed to land on her around-the-world journey but never reached. Since then the island has been under critical observation. No time zone has been specified on the island since it is uninhabited.

Commonly called Gunkanjima, this abandoned island at one point in history was the most densely populated places on the planet. The abandoned concrete buildings are the highlighting feature of the island. It is gaining international attention and discussion about the ruins has become a frequent thing now. Well, you might have guessed by now that visiting the island can be quite a spooky experience.

Suggested Read: Top 10 Haunted Places In Tokyo That Will Scare The Daylights Out Of You!

North Sentinel Island is one of the Andaman Islands. Home to the native Sentinelese, it is one of the most dangerous islands in the world. The island belongs to the South Andaman administrative district. The entry to the island is strictly forbidden due to the chance of visitors getting attacked by the Sentinelese people.

Poveglia Island is a small island used as a dumping ground for the diseased and the sick. This practice started with the Romans and later in 1922 a mental hospital was built on the island. Many crazy experiments took place here. But guess what, today the island is uninhabited and none of the locals have the guts to visit.

Suggested Read:
15 Most Haunted Places In America: One Of A Kind & Each One With A Disturbing History!

Another most strange islands in the world is Ramree island. Infested with saltwater crocodiles, there were around 500 Japanese troops eaten alive here during WWII. This incident is also listed in the Guinness Book of World Records. Presently, the region does not support a viable population of crocodiles.

The air on the Izu island contains the highest concentration of sulphur on earth due to the volcanic activity. The inhabitants are required to carry gas masks with them at all times if they plan on visiting the island. Due to this reason, for a visitor it can be one of a kind experience.

Further Read: 9 Hidden, But Beautiful Islands In India For A Memorable Escape to Bliss

What do you think about this list of 20 strange islands of the world? Do you think they are worth visiting? If yes, Book your world trip right away. We promise you won’t regret it.

Frequently Asked Questions About Strange Islands Of The World

Q. What is the weirdest island in the world?

Q. Why is it called Mistake Island?

A. While many think the island’s name is a joke, “Mistake” here is actually a corruption of the word “Moosabec”. People believe that “Moosabec” is more or less an Abenaki word that could mean “moose head”.

Q. Why is it called Disappointment Island?

A. It is believed that when the British explorer John Byron had visited Napuka Atoll as well as Tepoto Atoll, the natives on these islands had a hostile disposition toward him because of which he started calling them “Disappointment Islands”.

Q. Can I live on Disappointment Island?

A. No one can possibly live on Disappointment Island since there is no source of freshwater on this island.

Q. What is the most dangerous island in the world?

A. Some of the most dangerous islands in the world include Izu Islands in Japan, Saba in the Netherlands, Gruinard Island in Scotland, Ramree Island in Burma, Ilha da Queimada in Brazil, North Sentinel Island in Andaman, and the Farallon Islands.

Q. Is it illegal to go to North Sentinel Island?

A. Yes, visiting North Sentinel Island is strictly forbidden due to the chances of visitors getting attacked or a threat of life to the native Sentinelese people (according to past incidents of both).

Q. Is there fresh water on North Sentinel Island?

A. Yes, North Sentinel Island would most certainly have freshwater since it supports and sustains human and animal life, and that is not possible without freshwater sources.

A. The Nature Conservancy, Inc. is the rightful owner of the Palmyra Atoll in the United States Minor Outlying Islands. It manages it as a nature reserve.

33 Largest Zoos In The World Where You Can Spot The Rarest Fauna And Have Ultimate Fun In 2021!

32 Budget International Trips For Your Holiday In 2021 Which Will Cost You Less Than An iPhone!