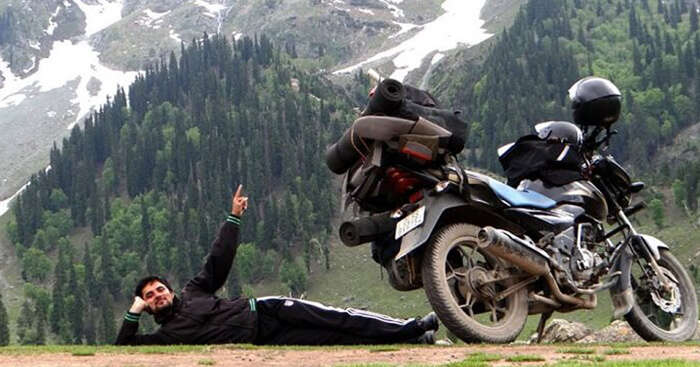 Over a lakh km on the Indian railways, a job in the Delhi metro, plenty of road trips, numerous treks and finally married to one of the greatest fans of his Hindi travel blog, Musafir hu yaaro — Neeraj Jat’s entire life is driven by his crazy passion to travel.
Smitten with travel since early childhood, Neeraj manages to set out on adventures — alone or with friends — more often than others pay a visit to the nearest mall. That too, despite working full time as an engineer with the Delhi Metro. His blog captures his tremendous spirit to travel, while keeping true to the quirks and rustic details of his travel adventures.

The most interesting fact of Neeraj’s life is that it was his love for traveling that led him to his wife. As his interactions with an avid reader of his blogs increased, they met and eventually decided to get married. Although her father too was among his regular readers, but initially, did not consent to their union. Things settled down gradually and the couple has been on several journeys since.

Pre-marriage most of Neeraj’s trips were taken solo, only occasionally accompanied by friends. But after getting married earlier this year, all his travels have experienced his wife’s company. But marriage has — in no way — diluted his crazy love for trekking, biking or train-journeys. Everything is the same as it used to be.

When exactly was he bitten by the travel bug?

Travel has had Neeraj fascinated since childhood, but it was after getting into a job that his journeys experienced a significant hike. As financial independence seeped in, so did the confidence to undertake travel adventures alone. In the more recent past, his blogs have been bringing some funds through ad sense. However, Neeraj claims that the Hindi language of the blog finds it hard to draw traffic. So the cost of his travels get born out of his salary account, almost entirely.

So, where all have his wanderings taken him?

Almost every month or two, Neeraj goes out on an adventure. This has led him through most parts of India. He has traveled through Himachal, Uttrakhand, Rajasthan, Madhya Pradesh, Gujarat, Maharashtra, Assam Mizoram and many more places, and recorded notes on his blog.

Although he ends up paying multiple visits to one place, but Ladakh has happened to him the most number of times. He once undertook the journey to Ladakh on a cycle, and once on a bike. On another occasion, he went for trekking and the fourth time, just for chilling in the Ladakhi winters.

How does he do it? Planning and execution.

Since Neeraj travels cheap, public transport is his most favorite mode of traveling. Train journeys top his list and continue to fascinate him till date. He has undertaken a few excursions on bicycle, but has stopped cycling out of his more recent fascination with biking.

As his trips are managed in a meager budget, to trace his most economical one would be difficult. But to point out, his 13 days all-India trip on Indian railways cost him 5000 bucks only. On the other hand, his most expensive outing till date has been in August 2014 – the Zanskar trek. He began by boarding a flight from Delhi to Srinagar, hired a taxi from Srinagar to Kargil and Padum, and trekked through the rest of the journey from Padum to Darcha, via Phuktal Gompa and Shingo La.

For all new wanderers, Neeraj has one thing to say, “Define an objective for all your travels”. An objective, which in future can turn out to be helpful for you and others. Visiting Shimla or Manali and crashing on the hotel bed or pampering yourself with chicken and alcohol is meaningless and insubstantial.
He strongly advocates in favor of penning down your travels. Sharing with the world what one has taken home from a journey, is an act of responsibility and maturity.

Neeraj has managed to craft a life that he does not need to escape from. Recently back from exploring the soon-to-be-a-past Satpura narrow gauge railway line, he now plans to brave the -20 degree Celsius of Spiti, for which we wish him the best.

Further Read: This Traveler Sketches Wherever He Goes And His Art Is Surely The Best Thing You Will See All Day